India’s quasi sovereign wealth fund, the National Investment and Infrastructure Fund (NIIF), has announced the acquisition of an equity stake in the Navayuga Quazigund Expressway Private Limited (NQEPL) through its Master Fund at an enterprise value of around US$380 million.

The tunnel will be managed by its road platform Athaang Infrastructure. NQEPL is one of the largest annuity projects awarded by the National Highways Authority of India (NHAI) on a BOT (build-operate-transfer) basis. This project receives fixed, semi-annual payments from NHAI, providing stable and predictable cash flows.

So far this year, India has attracted more than US$7 billion of sovereign investment, of which nearly a third was spent on infrastructure. NIIF is positioning itself as a conduit for investment. All three sub-funds managed by NIIF Ltd are 49% owned by the Government of India,  with the rest held by marquee foreign and domestic investors and multilaterals, including ADIA, Temasek, OTPP, AustralianSuper and AIIB. The Master Fund closed with US$2.3 bn, and the Fund of Funds and the Strategic Opportunities Fund have attracted US$ 0.8 bn and US$ 1.1 bn respectively so far. The SOF completed its first direct VC investment last month with Ather Energy’s Series E, after its deal with FirstCry fell through.

However, state-owned investors are not reliant on NIIF to originate opportunities. Last month, two of Canada’s biggest public pension funds ramped up their investments in the Indian road network, contributing a total of US$816 million to a US$1.2 billion deal to acquire assets from Brookfield. CPP Investments and OMERS are supporting Indinfravit Trust, an infrastructure investment trust, take over the toll roads. The portfolio comprises three toll roads and two annuity roads, with approximately 2,400km in the states of Andhra Pradesh, Bihar, Maharashtra and Uttar Pradesh. IndInfravit currently holds a portfolio of 13 operational road concessions with about 5,000km in five states, with CPP holding a 46% equity stake and OMERS 22%; German insurer Allianz Capital Partners owns the remainder. 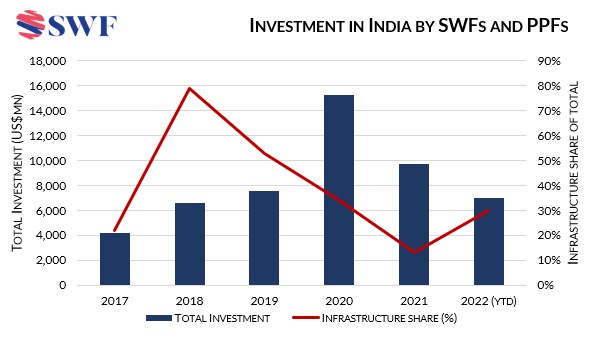 Also in June, DP World and NIIF announced the broadening of their existing partnership, with NIIF Master Fund investing US300 million for a shareholding of approximately 22.5% in Hindustan Ports Private Limited (HPPL), the wholly owned subsidiary of DP World. With this transaction, which is also the Master Fund’s single largest investment, NIIF’s investment under this partnership reached US$500 million. HPPL is one of India’s leading container terminal platforms with a proven track record of growth over the long-term. The entity operates five container terminals managing more than five million TEU2 of capacity and representing a national market share of over 20%.

There are many factors counting in favor of sovereign fund investment in infrastructure at a time of both heightened risk and energy transition. Infrastructure is a tangible asset which retains a residual value, making it attractive at a time of economic distress. At the same time, it provides a long-term predictable cashflow that chimes with the inter-generational horizon of state-owned investors. Regulated assets like toll roads and utilities usually involve inflation-indexed increases in charges, which ensures a hedge against inflation – a particularly important factor at a time of heightened global inflationary pressures. Infrastructure also allows state-owned investors an opportunity to add value to assets and expand portfolios, as IndInfravit is doing. Unlike venture capital, infrastructure has a high barrier of entry that prevents competitors, giving toll road operators a monopolistic position in the market.