Nigeria's NSIA Surges to US$3.5bn, Looks to Infra Partnerships and VC for Growth

The Nigeria Sovereign Investment Authority reported growth of 250% in just six years to US$3.5 billion in its latest annual report and is set to press further with infrastructure development and investment in innovation under a new board announced by President Muhammadu Buhari this week.

The fund's annual profits reached a record high of NGN156.5 billion in 2020, a 350% increase over the previous years, assisted by foreign exchange gains and robust gains on financial assets as well as growth in investment income. 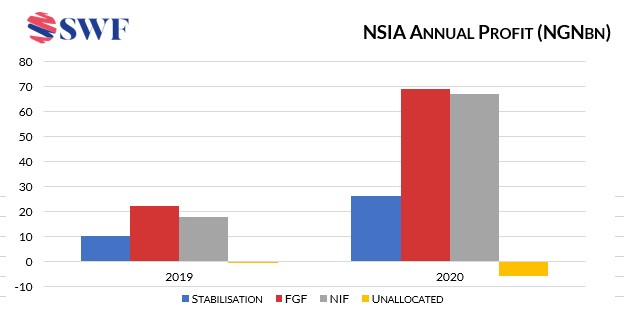 The NSIA has a unique multiple mandate with pools of funds covering stabilization, savings and strategic development. The Stabilization Fund, representing 20% of AUM and comprised of US Treasuries and 1-3 year corporate bonds, returned 6.9%, which was 5.6% above the benchmark (US CPI).

Meanwhile, the Future Generations Fund (FGF), which represents the fund's long-term savings pool with around 30% of AUM, generated a 9.0% yield. Over the course of the year, the FGF shifted towards hedge funds, venture capital, and direct and co-investment in equities.  While the developed market allocation to long-only equity in the FGF grew by 7.7% (compared to the 16% MSCI World Index), emerging market long equities grew 22%. More impressively, its allocations to ETFs with exposure to US, European and Asian markets notched up a 30% return.

Speaking to Global SWF last month, Chief Executive Uche Orji explained the reasons behind NSIA’s year of strong growth: “In 2020, we rotated our equities position more into developed markets equities, which fueled the fund’s performance to the double digits. We also changed our hedge fund managers resulting in superior performance.”

Rather than drastically cut exposure to public equities, the NSIA is now looking mostly at shifting from tech stocks due to expensive valuations and towards pharma, aviation and consumer discretionary in anticipation of a post-pandemic economic revival, as well as emerging markets.

Comprising half the fund, the National Infrastructure Fund (NIF) represents the largest and most politically important mandate as it seeks to develop the economy. The government’s eye is on long-term oil price weakness. Like other oil-producing nations, it is mindful of the need to diversify – not only to broaden the contribution of economic activities to fiscal revenue, but also to generate jobs for an overwhelmingly young population of Africa’s most populous country.

Buhari has called on the fund to invest the money in economic development, bolstering its strategic mandate. The NIF is branching out into various sectors, including healthcare, fertilizer production, animal feed processing, solar energy generation, and the development of financial infrastructure to foster greater inclusion. Local innovators will be supported through venture capital investments.

The NIF has a three-pronged approach:

Explaining the priorities going forward, Buhari said this week: “On the public sector partnership, we are working with the NSIA on strategic infrastructure projects such as the Second Niger Bridge, the Lagos – Ibadan Express Way and the Abuja – Kano Road, to mention a few.

One of the main tasks facing the new board will be the appointment of a new CEO to replace Orji, who is scheduled to leave at the end of his tenure next October. Orji told Global SWF that NSIA’s continued growth over the next decade will depend on four key factors: