New Funds Sign Up to OPSWF, But Does it Make a Difference to Climate Change?

Gabon’s Fonds Gabonais d’Investissements Stratégiques (FGIS), Greece’s Hellenic Corporation of Assets and Participations (HCAP), the Nigeria Sovereign Investment Authority (NSIA) and The Sovereign Fund of Egypt (TSFE) endorsed the OPSWF Framework and its three principles and pledged to integrate climate change risks and invest in the transition to a Paris-aligned low emissions economy. Small by SWF standards, the funds represent estimated consolidated AUM of more than US$17 billion.

While OPSWF creates grounds for optimism, it lacks the ESG performance metrics that are crucial to judging whether a state-owned investor is progressing towards measurable goals. Some signatories retain sizable exposures to oil and gas, but lack both transparency and consistent reporting methods – issues that have led to poor scores in Global SWF’s Governance, Sustainability and Resilience (GSR) ranking.

OPSWF’s framework stops short of the kind of expectations seen in the UN’s Net Zero Asset Owners’ Alliance (NZAOA), which makes it compulsory for members to set up goals and to meet them year after year. NZAOA commitments include five year targets for carbon reduction with net zero envisaged across the portfolio by 2050, although some members have been more ambitious and targeted earlier dates.

Canadian public pension funds are hailed as trailblazers in the drive towards net zero. The “Maple 8” funds representing C$1.6 trillion of assets issuing a joint statement in November committing to environment goals, including implementing common standards and disclosures to assess investments. But progress has so far been slow and subject to individual funds' self-reporting.

In April, CDPQ's real estate subsidiary Ivanhoé Cambridge announced an ambitious program aimed at achieving net zero carbon for its international portfolio by 2040. CDPQ's 2020 Stewardship Investing Report, released in April, shows the Quebecois fund has slashed the carbon intensity of its portfolio by 38% since 2017, well above the goal of 25% by 2025, with C$36 billion (US$28 billion) in low-carbon assets. The fund's success owes much to its attention to carbon auditing of all assets, not just focusing on the obvious exclusions.

Despite these bold ambitions by NZAOA member CDPQ, the fund has come under fire for not achieving sufficient progress. In August, the Canadian Centre for Policy Alternatives stated that CDPQ and Canadian Pension Plan (CPP) “do not reflect the action needed to address the scale of the climate crisis.” Its report found that CPP’s oil and gas investments increased by at least 7.7% in 2016-2020. While CDPQ decreased its shares in the sector by 14% during that time, its investments in fossil fuels were 52% more than the CPP by end-2020.

Funds outside the NZAOA and OPSWF have also established Paris-aligned targets and carbon audits. In January the Ontario Teachers’ Pension Plan Board (OTPP) announced its commitment to achieve net-zero greenhouse gas emissions by 2050. Its strategy is not just focused on exclusions, but also impact investment with a rise in capital allocation to climate-friendly investments and solutions and working with portfolio companies to achieve net zero emissions by 2050. Yet, OTPP is not an NZAOA signatory, putting it outside the reporting framework.

Analysing the pace and scale of energy transition is made near impossible by the opacity of its public audit and reporting by many funds. Some OPSWF members have retained significant carbon emitting assets, such as Mubadala’s weighty holdings in the oil and gas industry and midstream and downstream sectors. While Mubadala has invested heavily via its Masdar renewables subsidiary and other low carbon sectors, the impact on the carbon intensity across the whole portfolio is hard to judge.

The problems in analyzing the “greenness” of Mubadala’s portfolio – and its ongoing energy transition – underlines the challenge facing all asset owners is the lack of standardisation of performance reporting. NZAOA’s limitation is that members are working to their own climate auditing methodologies, which prevents comparisons between funds reporting different data and operating according to dissimilar ratings.

In its final report released in 2017, the Task Force on Climate-related Financial Disclosures (TCFD) noted the “inconsistencies in disclosure practices, a lack of context for information, use of boilerplate, and non-comparable reporting” were “major obstacles” in assessing risks and opportunities related to climate issues. Some state-owned investors are involved in standardizing climate-related metrics.

Last month,  a group of global private equity firms and pensions funds formed a group to address the issue. The coalition, led by Carlyle Group and NZAOA signatory California Public Employees' Retirement System (CalPERS) and including CPP among others, is examining data on greenhouse gas emissions, renewable energy, and other metrics of portfolio companies. Boston Consulting Group will be using data from group members, representing over US$4 trillion of assets, on their portfolio companies, which will be aggregated into a benchmark and reviewed annually.

This week, seven members of the One Planet Private Equity Funds (OPPEF) announced their support for the TCFD’s recommendations. They called for “increasing transparency through reliable, comparable and decision-useful climate-related financial information to help understand climate risks and opportunities effectively.”

Developing metrics and targets will be among the goals in facilitating their alignment with the OPSWF Framework and they pledged to engage with OPSWF to support the adoption of international standards for climate-related financial reporting and work towards integrating this data into investment processes. 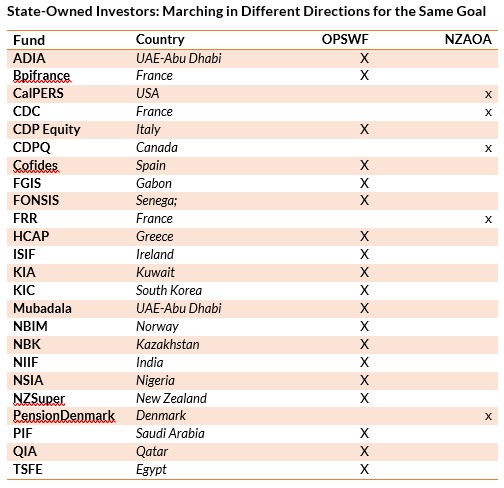