Namibia’s SWF: What Do We Know About Africa's Newest Fund?

Namibia is set to launch Africa’s newest sovereign wealth fund in coming weeks, but details have been notably sketchy. The SWF will join Africa’s 30 SWFs or sub-funds, most of which are relatively minuscule, with combined wealth of US$98 billion.

The establishment of the fund is one of the first goals of the Harambe Prosperity Plan II (HPPII), a medium-term economic development action plan spanning 2021-25. The fund will be seeded with asset sales and royalties collected from mineral extraction, such as diamond mining. The recommendation to launch an SWF was set out by the High-Level Panel on the Namibian Economy (HLPNE) with an initial framework scheduled in Q2 FY2021/22.

Finance Minister Iipumbu Shiimi said this week that the fund will be launched by the end of 2021, in accordance with HPPII, and will have a dual mandate. The stabilization part of the fund will be invested in fixed income assets with a focus on low risk and liquidity, while the intergenerational fund will comprise of 70% public equity with the rest comprised of fixed income and private market assets, including private equity, real estate and infrastructure.

Most of the SWF’s portfolio will comprise foreign holdings with the likelihood that the government will appoint external asset managers, as is the case for Botswana’s Pula Fund and the stabilization fund of the Nigerian Sovereign Investment Authority (NSIA). 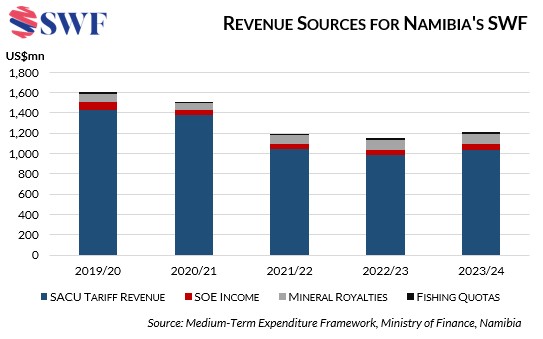 The SWF will be seeded with fund raised by the privatization of state-owned enterprises as well as income from Namibia’s share of the Southern African Customs Union (SACU) revenue pool, royalties from mining of diamonds and other minerals, fisheries quotas and proceeds from the green renewable sector. It could also mop up the remaining money in the Minerals Development Fund (MDF). In FY2021/22, SACU tariff revenue is forecast to fall 24% to N$15.6 billion (US$1.04 billion), while mining royalties will generate N$1.3 billion (US$87 million) and SOE dividends and profits will total N$773 million (US$52 million).

It is unclear what portion of these income sources the SWF will take and whether the SWF will also take control of NPTHL. SACU tariffs represent 30-40% of total fiscal revenue and apportioning these to the SWF would challenge efforts towards fiscal consolidation. Namibia followed an expansionary policy in response to the Covid-19 pandemic to head off the 7.9% contraction in GDP in 2020. An improved outlook in coming years should boost revenue, but any transfer of income-generating assets and revenues to the SWF will complicate efforts to reduce the budget deficit and start tackling the public debt that has soared above 60% of GDP.

The government plans to privatize 22 SOEs with the proceeds going to the SWF. The biggest of these assets is Namibia's largest telecommunications company with a 90% market share, MTC Namibia. It is set to list a 49% stake on the local bourse by the end of November 2021, generating N$3 billion to N$3.5 billion (US$210-245 million) for the new SWF; the state holding company Namibia Post and Telecommunications Holdings Limited (NPTHL) will retain a minimum of 51%.

Last year, the HLPNE recommended that NamPost, the Namibia Institute of Pathology (NIP), Meatco, Namibia Wildlife Resorts and Namport could be co-owned as joint ventures with the private sector, the national railway company TransNamib could be privatized or form joint ventures, and Air Namibia be liquidated and turned into a regional airline under the control of the National Airports Company (NAC).

The SWF is likely to both invest in domestic green energy infrastructure as well as using it to grow revenues. The development of solar energy is at a nascent stage, but is a key plank of the HPPII given the country’s high potential in the sector and regarded as necessarily for the objective of a 10-fold increase in generation capacity by 2030. Presently, Namibia’s green energy generation is focused on hydroelectricity, which constitutes more than two-thirds of installed power capacity. Green hydrogen is also cited as a potential energy source in Namibia. However, 40% of Namibia’s 640MW of annual power consumption comes from imports from South Africa, much of which is from coal-fired power stations. 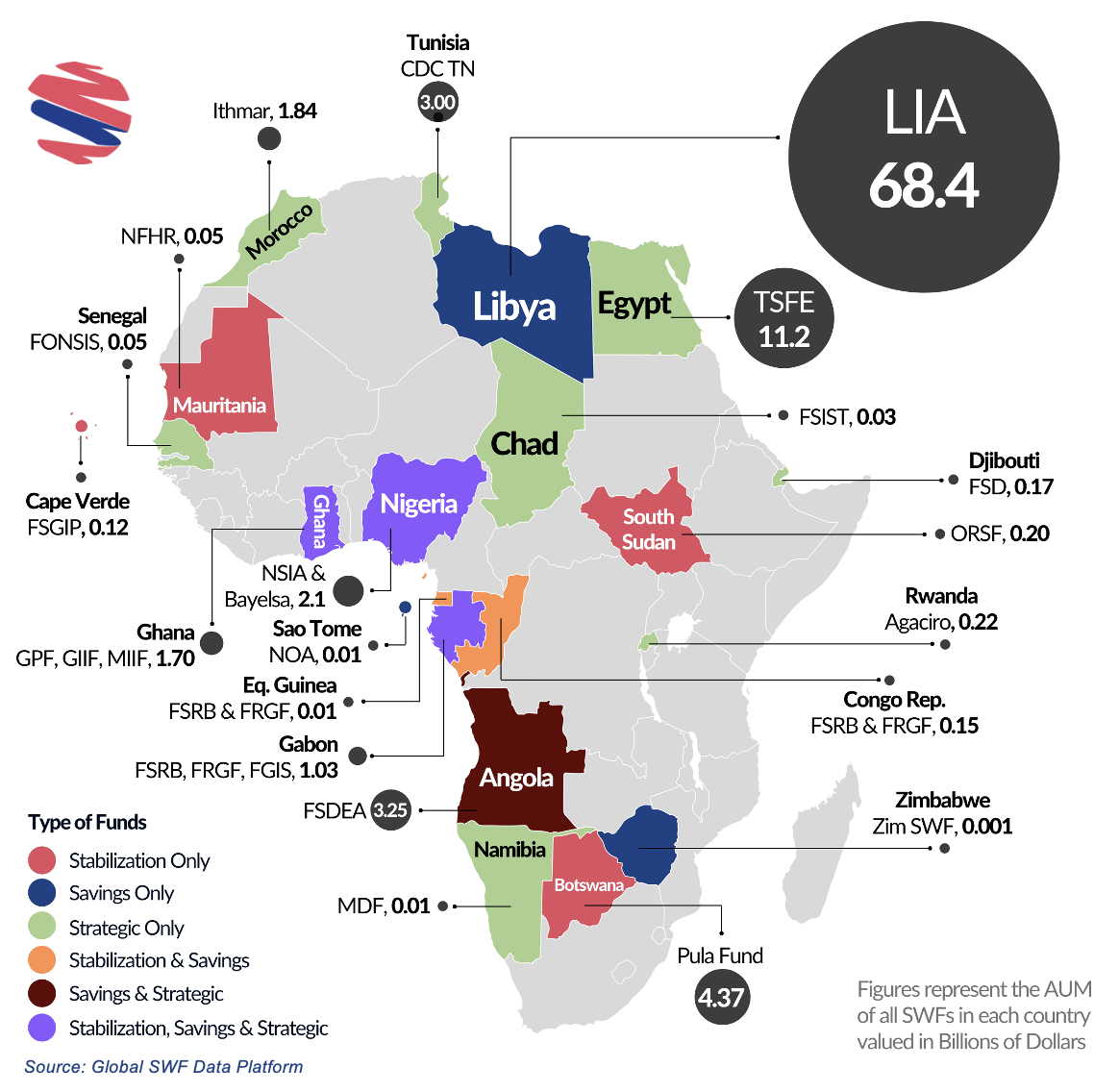