Bahrain’s US$18 billion Mumtalakat has undergone a makeover and organizational shake-up, separating assets into portfolios with very different objectives.

The sovereign wealth fund previously grouped its assets according to economic sector, but has reorganized them into four portfolios.

The Government holdings portfolio (16% of AUM) comprises state-owned enterprises of national strategic importance that were previously transferred to the fund by the government and operated by government bodies. This portfolio includes trans-national assets such as Bahrain’s stakes in Apicorp, Arabsat and the Gulf Investment Company as well as fully owned Bahrain companies such as the Bahrain Airport Company (BAC), Gulf Air and the Gulf Aviation Academy. 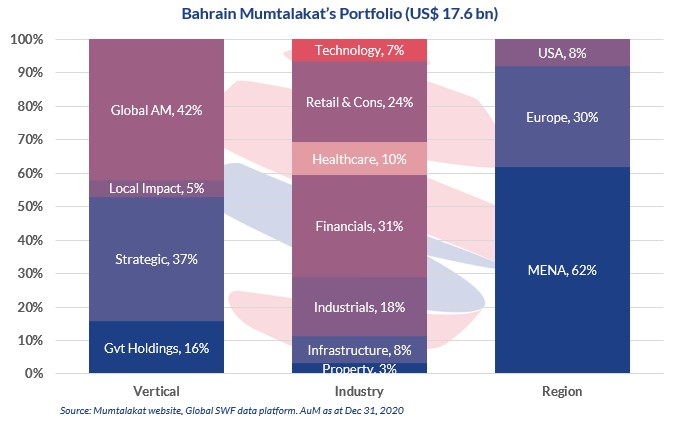 The new structure – along with a new logo and rebranding – suggests a more considered approach to Mumtalakat’s strategy. Mumtalakat was created in June 2006 and modelled after Temasek, as an independent holding company that also executes the government’s industrial policies. Upon establishment, 29 commercial assets were transferred to Mumtalakat from the Ministry of Finance.

According to Global SWF data, Bahrain’s home MENA region represents 62% of AUM, followed by Europe (30%) and the USA (8%). Finance, retail & consumer, and industrials are its three biggest sectoral exposures, representing 31%, 24% and 18% of AUM, respectively.

The Fund pursues private investments and diversification away from oil and gas – which represents a far smaller proportion of GDP than other Arab states in the Gulf region – on behalf of the Kingdom, holding stakes in over 60 local and international commercial enterprises in 13 different countries.

The latest change indicates it could be taking lessons from Abu Dhabi’s ADQ which is gradually paring back stakes in chunky domestic infrastructure assets to generate liquidity for venture capital. So far this year, ADQ has divested significant minority stakes in AD Ports and the National Marine Dredging Company, generating an estimated US$1.4 billion in dry powder. Part of these funds has been invested in UAE digital banking platform Wio alongside Alpha Dhabi, Etisalat and First Abu Dhabi Bank, and also its involvement in a consortium that in recent days acquired a majority stake in subscription television service Starzplay Arabia.

Mumtalakat has not signalled its intention to follow ADQ's strategy and liquidate any of its government holdings, but it is clear it seeks to renew its role in the diversification of the island’s economy with a dedicated team overseeing a more dynamic local investment portfolio that is set to grow in importance – potentially examining venture capital as part of the mix.