One of Abu Dhabi's state-owned investors, the US$243 billion Mubadala Investment Company, is working to attract third-party capital from institutional investors as part of its ambitious bid to double its AUM by the end of the decade.

Private equity arm Mubadala Capital has raised US$1.63 billion in its Europe and North America focused MIC Capital Partners III private equity fund, supported by partnerships with institutional investors such as Blackrock which stumped up US$400 million as well as US$500 million from Mubadala itself. Nearly all the fund is already committed with around US$230 million in dry powder still left to spend on four business sectors: media, sports and entertainment; consumer and food services; financial services; and industrials and business services. Mubadala Capital is now talking of acquiring seed assets for a fourth fund.

In its bid to boost its private equity strategy, Mubadala Capital will be increasing the number of personnel at its London office in September. Antoun Ghanem, a director in the private-equity group who leads Mubadala Capital’s European investment practice, will move to London from Abu Dhabi to get closer to the European market. The total number of private equity specialists across its New York and London offices will number three or four.

Mubadala Capital, which was established in 2011, now manages a third party portfolio worth US$9 billion. Its strategies also include venture investing, public equities and a fund focused on Brazil. So far this year, the SWF has committed an estimated US$6.6 billion of capital in 39 private equity deals, excluding infrastructure and real estate. Global SWF forecasts that Mubadala will top the record year for acquisitions in 2020, which saw a US$10.8 billion of investments in 26 deals.

Global SWF data show that Mubadala is increasingly targeting earlier stage investment rounds with an emphasis on disruptive tech. Since the consolidation of the three funds in 2018, Mubadala has moved from acquisitions heavily oriented to chunky stakes in the energy sector (which represented nearly 80% of investment) towards venture capital in tech and retail (which together comprised 85% of capital deployed). The IPO will release more liquidity for greater exposure to areas of growing interest to Mubadala as it seeks to boost returns and reach its AUM target.

Last month, Mubadala turned to debt and equity markets to generate cash for new acquisitions with plans to sell US$1.8 billion of bonds, raising the amount of debt raised by the fund so far this year to US$3.6 billion. The latest bond offer, via subsidiary MC Brazil Downstream, consists of 10-year senior secured notes, which will help finance its acquisition of Refinaria Landulpho Alves (RLAM), Brazil’s second biggest refinery, at a cost of US$1.65 billion.  In May, Mubadala sold US$1.5 billion two-tranche bonds via Mamoura Diversified Global Holding, including US$500 million of 10-year paper and US$1 billion of 30-year Formosa bonds sold in Taiwan. In March, it launched two-tranche bonds worth EUR1.1 billion (US$1.32 billion) comprising EUR600 million of six-year paper and EUR500 million of 13-year bonds.

In common with other sovereign wealth funds, Mubadala is revamping its structure and seeking to become nimbler in grasping opportunities as it sets out to achieve AUM of nearly US$500 billion by 2030. The Abu Dhabi government had already consolidated Mubadala with two of other state-owned investors operated by the emirate: the International Petroleum Investment Co. (IPIC) and the Abu Dhabi Investment Council (ADIC).

Mubadala is selling down in “legacy commodity sectors” and deploying capital into disruptive industries in technology and healthcare, group chief executive Khaldoon Al Mubarak said.  Mubadala’s exits in 2020 included chunky stakes in Energias de Portugal, Borealis, Aldar Properties, Unicredit and Torresal Energy – together valued at nearly US$11 billion. The fund announced in April that it had begun preparations for an IPO in its semiconductor business GlobalFoundries, with a targeted enterprise value of US$20 billion and listing for 2022. The offering is set to coincide with the global recovery from the pandemic, which is expected to see demand for electronic components soar as the tech sector moves up a gear.

The Abu Dhabi fund also staged an IPO of its wholly owned satellite communications firm Al Yah Satellite Communications Company (Yahsat) on stock exchanges. It attracted strong demand, raising about US$731 million according to Bloomberg, and representing the first major IPO on the Abu Dhabi bourse since Abu Dhabi National Oil Co Distribution was listed in 2017. 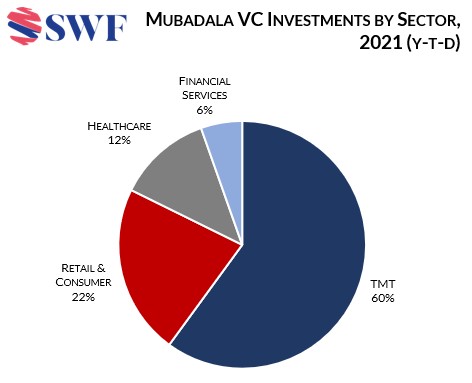