Mubadala Ramps Up Its Contribution to UAE Investment in the UK

Abu Dhabi sovereign wealth fund is scaling up its plans under the UAE-UK Sovereign Investment Partnership (UAE-UK SIP) with the GBP5 billion (US$7 billion) investment framework agreed in March boosted to GBP10 billion (US$14 billion) over the next five years under a deal signed this week in Downing Street.

The UK is likely to feel the full impact of the capital flow very soon with the British Trade Commissioner to the Middle East, Simon Penney, telling Reuters this week that there was “line of sight”  for at least GBP1 billion of investment by the year-end and “the expectations are high that it will reach a GBP2 billion watermark this year.” So far, GBP1 billion has been invested under the SIP.

The SIP is focusing on tech, infrastructure and energy transition – areas where Mubadala has already made significant investments in the UK over the past decade. Global SWF’s investment tracker for Mubadala shows that infrastructure including renewable energy represents 47% of the value of its investment in the UK.

In terms of renewables, Mubadala already has a long-standing interest in Britain’s renewables sector. Its biggest single investment to date is in the London Array, a 1,000MW wind farm in which it acquired a 20% stake via its green energy subsidiary Masdar in 2008. The investment was valued at around US$650 million – around half the total the SWF has invested in the UK to date. Masdar also has a 25% stake in the GBP210 million Hywind Scotland, world’s first offshore floating wind farm with 30MW capacity.

Healthcare, including biotechnology and life science industries, represents the second biggest target with 15% of total investment. In March, Mubadala agreed to commit GBP800 million (US$1.1 billion) in the sector in 2021-26. 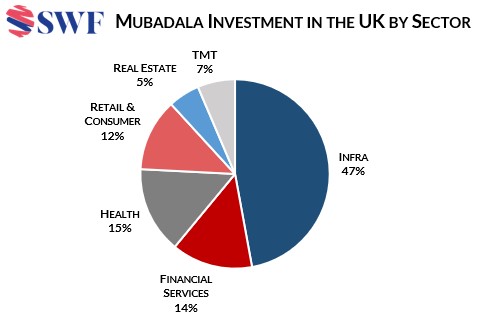 The UK's pharmaceutical industry is one of the country's major engines of research and innovation. Despite fears of a post-Brexit negative outlook, UK biotech companies raised a record GBP2.8 billion in equity finance in 2020, according to the UK BioIndustry Association (BIA). Venture capital financing secured GBP1.39 billion, with five companies each raising over £50m in the year.

Mubadala has already made some tentative first steps into the UK’s life science sector. In November, it took a stake in Envision Pharma Group, which enables pharma and medical device companies to commercialize products through medical strategy and communications. The Covid-19 pandemic has boosted its interest in expanding its global healthcare portfolio, with a focus on early-stage innovators.

As the UK prepares to host the COP26 summit on climate change in November, Mubadala’s renewables subsidiary Masdar along with the Abu Dhabi National Oil Company (ADNOC) and BP are looking to climate-focused investments, particularly “low-carbon hydrogen hubs”.

In a joint statement, they said: “The hydrogen agreements also align with the UK’s recently announced commitment to achieve 5GW of low-carbon hydrogen by 2030 and the UAE’s Nationally Determined Contribution of reducing greenhouse gas [GHG] emissions by 23.5% compared to business as usual for the year 2030.”

Masdar’s interest in the hydrogen economy chimes well with the UK’s carbon capture, utilization and storage (CCUS) drive, which could provide blue hydrogen as a low carbon energy source. This is already being advanced in the UK by Norway’s Equinor with its 600MW Hydrogen to Humber Saltend project announced last year, producing hydrogen from natural gas, using CCUS facilities to eliminate carbon dioxide emissions.

Global SWF expects venture capital to be a major focus of tech and healthcare investment, via Mubadala Capital whose Ventures team focuses on Series B+ (early growth) investments in European-based technology companies.  Mubadala’s strategy aligns neatly with the British government’s Future Fund: Breakthrough program, which focuses on co-investments in high-growth, innovative R&D intensive companies. The UAE-UK SIP could potentially develop the fund as a platform for tech venture capital.

Although Prime Minister Boris Johnson is keen to portray the SIP as a triumph for post-Brexit Britain, the UK is joining China, France, Russia, Greece and Kazakhstan in the list of long-term UAE bilateral investment partners. Mubadala uses SIPs as its preferred framework to drive co-investment programs. SIPs enable it to gain intelligence on market opportunities and co-invest with the local fund or government, thereby lowering costs.

This week also saw Dubai and France explore a potential boost in economic and commercial ties with DP World group chairman and chief executive Sultan bin Sulayem meeting with French officials to explore opportunities. Earlier this year, Mubadala and France’s Bpifrance signed an agreement to launch a new co-investment partnership focused on African private equity. They will deploy up to EUR350 million (US$416 million) through fund and direct investments in private equity and venture capital with a focus on African start-ups. Mubadala is also backing Bpifrance’s LAC 1 fund.