Mubadala’s 70% surge in income to AED122 billion (US$33 billion) in 2021 validates Global SWF’s recent 2021 Fund of the Year award which acknowledged its rapid development as one of the Middle East's biggest and fastest growing funds.

The successful year was its strongest ever, supported by stellar growth in investment returns and exits as markets were lifted by the post-lockdown recovery. Its AUM now totals AED1.05 trillion (US$284 billion), representing an increase of 25% since 2018 when the Mubadala Investment Corporation was formed from the merger of its three predecessor funds – the Mubadala Development Corporation (MDC), the International Petroleum Investment Co. (IPIC) and the Abu Dhabi Investment Council (ADIC). The portfolio’s value leaped nearly 17% in 2021 alone and its current five-year rolling rate of return is 12.2%.

Highlights of the year include IPOs of satellite communications firm Al Yah Satellite Communications Company (Yahsat) on the Abu Dhabi Securities Exchange and semiconductor manufacturer GlobalFoundaries on the NASDAQ. The GlobalFoundaries IPO was one of the biggest in the US in 2021, after Coupang and DiDi Global, but excluding SPACs; the SWF still retains 89% of the company’s shares. Yahsat’s IPO attracted strong demand, raising about US$731 million  and representing the first major IPO on the Abu Dhabi bourse since Abu Dhabi National Oil Co Distribution was listed in 2017.

In terms of acquisitions, more than US$15 billion was invested in 2021, similar to the previous year. Highlights included a US$1 billion investment in the UK’s CityFibre, the US$1.8 billion acquisition of Brazil’s RLAM refinery, a US$1 billion stake in Israel’s Tamar offshore gas field, and its participation in the consortium that bought a 49% stake in Saudi Arabia’s Aramco Oil Pipelines for US$12.4 billion. So far this year, its biggest purchases include around US$1 billion in the joint buyup of Informa's Pharma Intelligence with Warburg Pincus.

Yet, its focus was not entirely large oil and has assets and the fund is engaged in green investments, notably via the renewables investor Masdar which in 2021 became a joint venture between Mubadala, the emirate’s oil company ADNOC, and TAQA Holdings, which is majority owned by another native sovereign wealth fund, ADQ. The merger of renewables assets by Abu Dhabi’s biggest energy asset owners under the ownership of Masdar, which was originally established by Mubadala, is accelerating its push to develop its global portfolio of solar and wind generation plants. The new, bigger Masdar has a portfolio of 23GW, representing around 8% of global renewables capacity. Its planned pipeline would push it well over 50GW by the end of the decade, maintaining its global share. 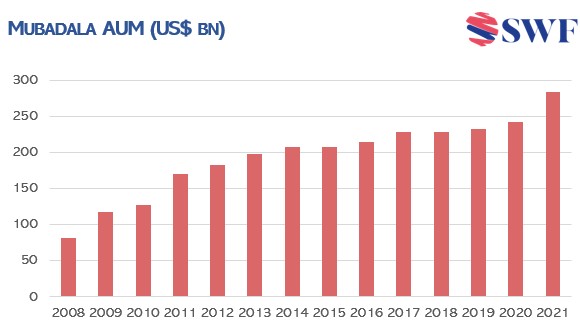 Speaking to Global SWF earlier this year, Mubadala’s Chief Strategy and Risk Officer Ahmed Saeed Al Calily said, “As we drive to double the size of our portfolio, our relative exposure to the hydrocarbon industries is intended to reduce over time.  While our strategy calls for significant and focused investment in high growth sectors with strong tailwinds such as technology, life sciences, fintech, renewable energy and traditional infrastructure, natural gas, for example, is expected to remain part of our capital deployment in the immediate future in support of the transition to cleaner energy alternatives. More broadly, Mubadala is investing in a range of energy assets and initiatives, from renewables to partnerships focused on the development and commercialization of the green hydrogen market.

“Our recent partnership with ADNOC and TAQA will propel Masdar’s renewable capacity to more than 50GW by 2030 and create a global clean energy powerhouse. This partnership will also support the UAE’s role in the energy transition and contribute to its strategic goal of achieving carbon neutrality by 2050, while becoming a global leader in green hydrogen.”

Also in December, Masdar and Engie signed a strategic alliance agreement to explore the co-development of green hydrogen hub in the UAE with total investment of US$5 billion and generation capacity of more than 2GW. Engie is a leader in green hydrogen development and the partners envisage establishing the giga-scale hub in 2030.

Meanwhile, Mubadala is selling down in “legacy commodity sectors” and deploying capital into disruptive industries in technology and healthcare. The fund's VC investors Mubadala Capital, which began operations in 2011, became a wholly owned subsidiary with US$15 billion AUM, including managing third-party capital. Global SWF data show that Mubadala is increasingly targeting earlier stage investment rounds with an emphasis on disruptive tech. Since the consolidation of the three funds in 2018, Mubadala has moved from acquisitions heavily oriented to chunky stakes in the energy sector towards venture capital in tech and retail. The recent big exits have released more liquidity for greater exposure to areas of growing interest to Mubadala as it seeks to boost returns and reach its AUM target.

In common with other sovereign wealth funds, Mubadala has revamping its structure and seeking to become more nimble in grasping opportunities as it sets out to achieve AUM of nearly US$500 billion by 2030. We expect more offices, more IPOs and more dynamic intervention in VC, emulating the sophisticated and aggressive VC strategy of Singapore's Temasek.