Most English football fans advocate an independent regulator with the power to ban ownership by sovereign wealth funds or individuals linked with foreign governments, according to a survey of 10,500 supporters of Premier League clubs by The Mail on Sunday newspaper.

According to the research, which has taken to views of more than 500 fans of each club, 85% support a regulator. Yet, there is opposition to such a move by fans of Manchester City and Newcastle United, which are owned by Sheikh Mansour, the deputy Prime Minister of the UAE and a big shot in Abu Dhabi’s sovereign investor universe, and Saudi Arabia’s Public Investment Fund (PIF), respectively, indicating they see the injection of Middle Eastern capital as positive to their clubs’ progress.

English soccer’s top flight Premier League contributed GBP7.6 billion (US$10.4 billion) to the UK economy in the pandemic-hit 2019/20 season, according to a study by Ernst & Young. As such, the League’s gross value added is just over half the size of the British agricultural sector – and has grown 840% over the past two decades. English football offers global vertical merchandizing and media opportunities, enticing the patient capital of sovereign funds, but also the suspicions of fans who have a deep cultural attachment to their clubs.

The English Premier League (EPL) approved the GBP300 million takeover of Newcastle after receiving "legally binding assurances" that the Saudi state would not control the club. The deal had been caught up in Gulf rivalries, accusations of piracy in sports broadcasting, and controversies over PIF’s political relationship with the government. The plan hit the woodwork in 2020 as EPL bosses dragged their heels on whether PIF passed its owners and directors test amid concerns the fund was too close to the Saudi government; PIF acquired 80% of the equity with the remainder shared by British businesspeople Amanda Staveley and the Reuben brothers. Approval was given after the Saudi government settled a legal dispute with Qatar-based beIN Sports over alleged piracy by a Saudi broadcaster. 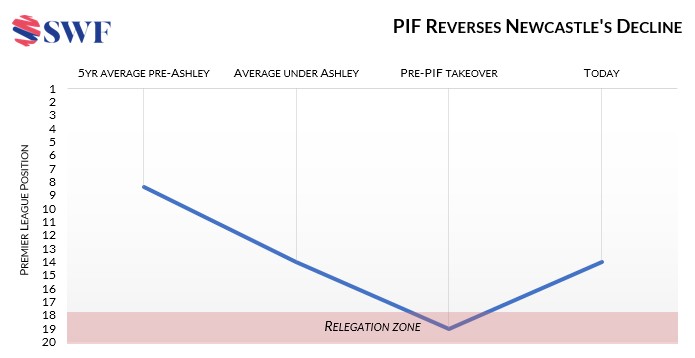 The deal drew accusations of sportswashing by the government-owned fund, but Newcastle fans are largely supportive of the move, both to be rid of previous owner retail magnate Mike Ashley and the fund’s deep pockets for investment. Led by chairman PIF Governor Yasir Al-Rumayyan, the new owners are splashing out on transfers, potentially spending as much on new players by the next season as they stumped up for the club. Moreover, the club’s fortunes have turned around dramatically since the PIF deal, rescuing it from relegation.

By the time of the takeover in October 2021, Newcastle had failed to win a single match. Since the appointment of Eddie Howe in November and a busy transfer window in January with PIF providing a GBP92 million outlay for new players, the Toons have won six out of 11 matches played so far and drawn in a further two, marking an incredible turnaround.

Manchester City has flourished since it was bought in 2008 by Sheikh Mansour, the chair of the Emirates Investment Authority (EIA), vice-chair of Mubadala and board member of the Abu Dhabi Investment Authority (ADIA) – three of the world’s top 20 sovereign wealth funds. In the five years before his ownership, City averaged 12th in the EPL but over the past 14 years it has risen to an average place of 2.8 with five EPL titles, two FA Cups and six League Cups.

In terms of his impact on the overall health and governance of English football, Mansour is regarded as the “most damaging” owner. Nearly a third of fans picked him as the worst owner, possibly due to repeated sanctions by UEFA for infringements of financial fair practice and an ongoing FFP investigation by the EPL. Indeed, meaningful and properly enforced FFP was cited as the highest priority among fans in the survey, followed by a more robust fit and proper person test.

Yet, among City fans, Mansour retains huge popularity with a 90.5% overall approval rating – the ninth highest in the EPL. He is behind Chelsea’s Roman Abramovich who is selling up due to sanctions related to his perceived closeness to Russia’s President Putin following Russia’s invasion of Ukraine in February.

It is not just Middle Eastern funds that have invested in English football. In January, the UK’s own GBP1.1 billion Future Fund gained a stake in Football Ventures (Whites), which took control of Bolton Wanderers in 2019. The equity was converted from a GBP5 million loan that the club took out from the Future Fund during the pandemic, giving the British Business Bank-administered fund an 8% stake. However, the shareholding in the League One side is not seen as a long-term yield-generating investment, particularly as the club’s GBP62.5 million valuation is vastly over-stated, and it is likely the stake will be sold to a private investor at a later stage.

Elsewhere in Europe, sovereign wealth funds have been focused on French football with Middle Eastern funds again dominating investment, such as QIA's buyout of French Ligue 1 side Paris Saint-Germain in 2011, which made it one of the world's wealthiest clubs. In 2020, Bahrain's Mumtalakat bought a 20% stake in Ligue 2 club Paris FC with a view to driving it into Ligue 1 within three years; presently, it is second in Ligue 2 behind Toulouse, potentially putting it in line for promotion for the 2022/23 season.

Elsewhere in Europe, state-owned investors have yet to make a mark, although it is not for want of trying. Arab royalty has privately acquired ownership of England’s Sheffield United FC (Saudi Arabia’s Prince Abdullah bin Musaid Al-Saud, who also owns Al-Hilal FC) and Spain’s Málaga CF (Qatar’s Sheikh Abdullah Al Thani). However, unlike Manchester City’s Sheikh Mansour, they have no involvement in the sovereign wealth sector.

In February 2021, Abu Dhabi’s Mubadala was touted as a frontrunner in the bidding for Italian Serie A side Inter Milan, but later in the year PIF was reportedly interested in acquiring the club from China’s Suning for US$1 billion. However, Suning confirmed in February that it has no interest in selling its 68.5% stake in the loss-making club.

The motivations behind sovereign wealth fund investment in European football clubs are comparable to trophy real estate assets, which are traditionally favored by Middle Eastern funds and billionaires. They represent strategic capital for foreign investors seeking to improve their public image in the West, enabling them to exert “soft power” and establish networks of influence in business and politics.

Editor of Sporting Intelligence Nick Harris, who oversaw the research, tweeted, “MOST fans of MOST clubs don't want gazillionaire owners (nation states, wealth funds, oligarchs). They want people who care about their club and community and who will do their best, within the rules, and means.”

Certainly, an owner willing to invest to revive a club’s fortunes can be assured of loyalty among the fan base. Media rights also generate significant financial gains, particularly in English football which offers avenues for global revenue growth. Ultimately, the popularity of owners and managers is bound up with League position and clinching cups and this is where fans’ interests converge with commercial success, which is the motivation of any investor.