The Abu Dhabi Investment Authority (ADIA) continues to maintain a relatively strong position in Chinese A-shares with an equities portfolio totalling US$1.4 billion at end-September, according to the latest data – up 16% from end-2020. It’s increased position came as it wound down its Japanese equities mandate. The Emirati fund is considering a China equities mandate with a possible minimum of US$300 million in investment size, according to Asian Investor this week.

The Kuwait Investment Authority (KIA) also boosted its holdings to approximately US$700 million, a rise of 44% over the January-September period.

Singapore’s sovereign fund GIC, however, maintained a holding position with no change at US$1.6 billion. In stark contrast, its national stablemate, the state-owned investor Temasek, slashed its A-shares portfolio by 12% to around US$900 million.

Canadian PPFs have wound back their exposure with CPP’s holdings cut by 20% to US$1.5 billion and CDPQ crimping its Chinese equities by 16% to US$400 million. The biggest state-owned investor (SOI) in Chinese A-shares was Norges Bank (NBIM) with a portfolio worth US$1.7 billion, but this was also slashed by 19% over the period under review. The trends matches overall market trends which saw Chinese equities experience a bear market, leading to some rotation of capital, particularly in light of the regulatory crackdown on big tech which wiped out over US$1 trillion from mainland Chinese stocks. 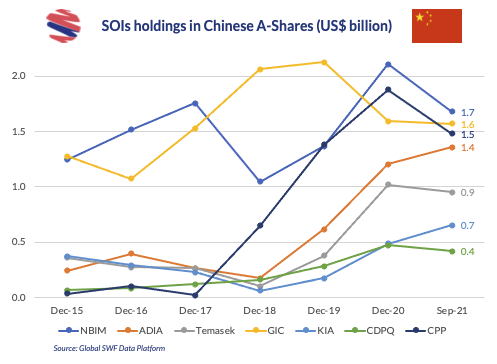 These SOIs are due to be joined by another Middle Eastern fund, Saudi Arabia’s US$430 billion Public Investment Fund (PIF), which this month applied to become a Qualified Foreign Institutional Investor (QFII) – a status that enables direct access to trade “A-shares” of Chinese stocks, denominated in China’s renminbi/yuan (RMB), on Chinese stock exchanges. PIF could potentially pour similar amounts of capital into A-shares, supported by liquidity flowing from excess foreign reserves held by the central bank, the Saudi Arabian Monetary Authority (SAMA).

PIF is rapidly evolving its public equities strategy, which has moved from long-term chunky holdings to behaving more like a retail investor and now taking a more sophisticated approach to boost long-term yield in the asset class.

Speaking to Global SWF at the beginning of the year, Yazeed Al-Humied, PIF’s Head of Local Holdings Investments, said: “Our U.S. equity acquisitions allowed us to selectively build positions in a range of high-quality companies and sectors that had the potential to help lead a global economic recovery.  During the past four years, we have increased our share of international investments from 3% to 20%; and have grown our staff from 40 to 1,000+, a phenomenal growth rate that we are very proud of.”

At present, PIF has a high weight in US equities with holdings, totalling US$43.4 billion at end-Q3 2021 – boosted by the IPO of electric vehicle producer Lucid Motors.

Advancement in Chinese markets indicates a desire to diversify equity exposures, although until disclosures on its holdings are available it is unclear whether PIF will emulate its US equity strategy. If it wants exposure to Chinese Big Tech, the Saudi fund will be mindful of the move by the Chinese authorities to ban internet companies whose data poses potential security risks from listing in the US. Supervision of firms listed offshore is being boosted after a cybersecurity investigation into ride-hailing giant Didi Global in July.