Lucid’s IPO has helped triple the value of US stocks held by Saudi Arabia’s sovereign wealth fund, according to its latest 13F filing with the SEC.

The Public Investment Fund’s (PIF) holdings of electric carmaker Lucid stock totalled US$25.8 billion at end-September, representing 59% of its total US public equities and 94% of its net portfolio gain over end-June. By the end of Q3, PIF’s total US public equity exposure was valued at US$43.4 billion – an increase of 2.7x over end-Q2 2021 and 6.2x over end-Q3 2020.

At end of today’s market close, Lucid’s stock price was 75% above its end-September level at over US$44, which would imply a further US$17.4 billion increase in the value of PIF’s stake to US$45.2 billion.

PIF began its involvement in Lucid in 2018 when it invested US$1 billion in the Tesla rival. In February, PIF, BlackRock and others invested another $2.5 billion in Lucid as part of its merger with special purpose acquisition company Churchill Capital Corporation IV. The Lucid Air model has production plans for 20,000 vehicles in 2022. By 2026, it hopes to deliver over a quarter of a million vehicles with annual revenue at US$22.7 billion – a rate of growth that is far larger than the expected CAGR of the overall EV market and could prove unrealistic given the intense competition from other producers.

The success of PIF’s investment in Lucid has prompted the fund to examine a big investment in Tata Group’s electric vehicle subsidiary. India’s Tata Motors is planning to separate its passenger car business, including EVs, and create a separate subsidiary valued at up to US$9 billion and aim for 10 new EV models by 2025 with associated nationwide charging infrastructure. 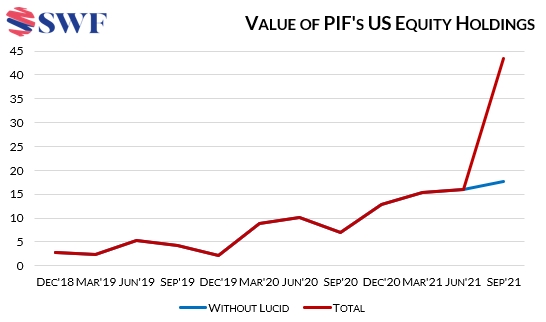 If Lucid was removed from the overall gain in value, there would have been a more modest 10.8% gain in portfolio value to US$17.7 billion.

Aside from Lucid, in PIF’s US equities portfolio there was an overall pivot to industrial producers with new positions in six other industrial stocks, representing US$1.2 billion of investment.

Other changes include new investments in PayPal (US$174 million) and Visa (US$358 million) in the financial services sector, suggesting increasing attention to payments services.

In the healthcare sector, PIF ploughed US$180 million into BeiGene, a Chinese biotech company involved in oncology with a product under testing for the treatment of Covid-19 symptoms.

There was a clear bias in favour of e-commerce and associated logistics sectors with new positions in Alibaba, JustEat, Shopify, Walmart, Fedex and FarFetch, which together saw PIF snap up a combined US$798 million in stock.

In another nod to the impact of the pandemic on consumption patterns, the Saudi behemoth bought US$176 million in shares of Prologis, the logistics real estate giant.

In the TMT sector, a US$202 million reduction in the fund’s position in the healthcare cost management solutions provider Multiplan was offset by new positions in social media platform Pinterest and Chinese online grocery retailer Pinduoduo which together were worth US$322 million. On the downside, a decline in the value of Activision Blizzard’s stock price wiped US$683 million off the value of PIF’s holding over the quarter. 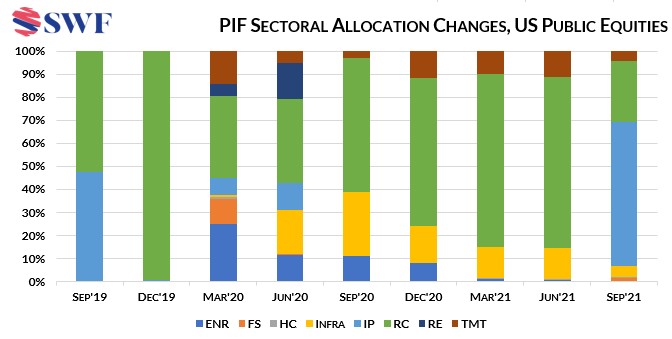