Australian real estate is proving to be a big draw for state-owned investors with the latest transaction involving an Australian-Canadian partnership buying up Moorebank Logistics Park (MLP) in southwest Sydney for A$1.67 billion.

AustralianSuper has acquired a 40% stake, while New South Wales’ state investor TCorp, Canadian public pension fund CDPQ’s real estate arm Ivanhoé Cambridge and AXA have each taken around 20%. Logos, the manager and development coordinator of the consortium, also has an equity stake in the 243-hectare industrial property.

The investors see the Moorebank property has strategically important as it will transform container shipping via Port Botany, which is 20% owned by AustralianSuper. They are looking at significantly ramping up warehouse space.

In a joint statement, the consortium partners said: “This acquisition positions the Logos consortium at the heart of a logistics revolution that will capture economic benefits as the MLP’s intermodal terminals ramp up, increasing the efficient transfer of goods from Port Botany to customers around Australia.” 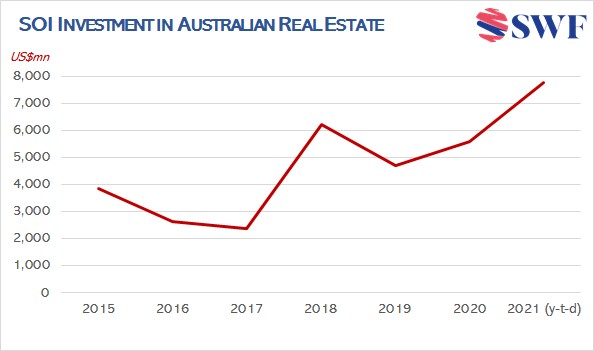 The deal has raised total SOI investment in Australian real estate to around US$7.8 billion so far this year according to Global SWF data, with around half the investment in logistics facilities. The levels of investment seen to date have surpassed the full-year total for 2020, when we estimate SOIs invested US$5.6 billion in real estate of which US$1 billion was in logistics. Australia is following similar trends to SOI approaches to real estate investments in other developed markets. Global SWF data shows that foreign state-owned investors have deployed approximately US$33.2 billion in capital to Australia from 2015.

Interest in logistics has been stimulated by the pandemic, which has changed working and consumer culture. Although GIC took a 25% stake in the Chevron HQ building in Perth in February and in recent days South Korean public pension fund NPS bought an office tower due for completion in 2024 at the One Sydney Harbour development, offices are declining in attraction with funds mindful that working practices are changing.

Meanwhile, the surge in e-commerce sales has led to a jump in demand for warehousing facilities, primarily those with good transport links. Australia has a lack of bespoke industrial property for operators seeking customised, modern facilities with good connectivity to industrial hubs, such as Sydney and Perth.

MLP benefits from being located close to freight transport networks, such as rail, road and cargo terminals. Sydney is expected to see stronger rental rates as a result of limited supply and robust demand, supported by manufacturing, and transport and logistics segments.

In May, Singaporean sovereign wealth fund GIC revealed it was set to join four other foreign state-owned investors in setting up an office in Sydney, Australia. The office, which will be the fund’s 11th worldwide, will be established in 2022. Other funds with offices established in the city are all Canadian public pension funds: CDPQ, CPP, OMERS and OPTrust.