The H1 performance of Sweden’s public pension funds, overseen by AP-Fondon, appeared to confirm what institutional investors have always thought - private markets are a good hedge against public market volatility - but Global SWF research finds that the truth is far more complex.

AP-Fonden has six sub-funds under its wing: AP1 to AP4 are buffer funds which are distributed equally, follow the same investment rules seeking “high returns at low risk”, and are supervised by a Council of Ethics (Etikradet). AP7 is funded by the alternative contributions and focuses on liquid investments only, while AP6 is a closed, much smaller fund that invests in private equities only – there is no AP5 fund. Together with the Dutch funds, the AP-Fonden are some of the most active PPFs in Europe.

With the H1 results out, we can see how returns have performed according to different levels of liquidity. Altogether, the AP1-4 funds saw their combined value fall 9.3% over H1 and 3.0% y-o-y to SEK1.76 trillion. In US$ terms, the value was affected by the depreciation of the krona with the end-June value of US$172.4 billion down 17.0% over end-December and down 18.1% over end-June 2021; the Swedish currency lost 16.4% of its value in the 12 months to end-June.

Consequently, AP funds benefitted from the strong US$ to reap the benefits of the exchange rate, as a significant portion of investment in listed assets are in the US market, while all liabilities lie in Swedish krona. Overall currency exposure varied with AP1 reporting 37.2%, AP2 31.0%, AP3 21.2% and AP4 19.9% and all funds reporting significant positive return contributions from the weakening of the krona. Yet, it was not forex that was the key determinant of performance in H1, it was liquidity.

AP4 is the most liquid with 55.6% of its portfolio in public equities with 35.9% in global equities and the rest invested domestically, 26.3% in fixed income and 18.1% in real assets; it reported the worst return over the first half at -16.5%. At the other end of the scale, AP2 had the highest allocation to private markets (35.4%) while its liquid assets included 28.6% allocation to fixed income and 36.0% to public equities with the lowest allocation to Swedish equities (7.1%); it reported the “best” return of the four funds at -9.7%. Analysing the H1 returns, we find that across the four funds, there was a negative -0.92 correlation between the level of liquidity and the return.

The results are unsurprising as equity markets have been rocked by the economic impact of the Russian invasion of Ukraine. The Stockholm Stock Exchange (OMXSPI) declined 30% and global market indices (MSCI World) fell 20% over the first half. For public pension funds, investing to fully fund pension commitments, the most significant figure is not six months or even a year, but long-term growth. In this respect, the picture is very different.

But the ultimate determinant of a fund’s out-performance of targets. Again, we find quite a different picture with a negative -0.67 correlation between liquidity and the level of out-performance over a 10-year period, although this excludes AP2 which did not report its target.

AP1 reported that even after taking the weaker return into account from the first half of 2022, it still achieved its long-term goal of 3% real return over rolling 10-year periods with an average of 6.9%. The least liquid fund of the three, AP3, stated that in comparison with its long-term static portfolio (LSP), consisting of only listed equities and fixed income instruments, it achieved an outperformance of 72.1% over 10-years – equating to an average of 7.2%. Meanwhile, AP4’s average return was 4.3% above its return target of 5.4%. 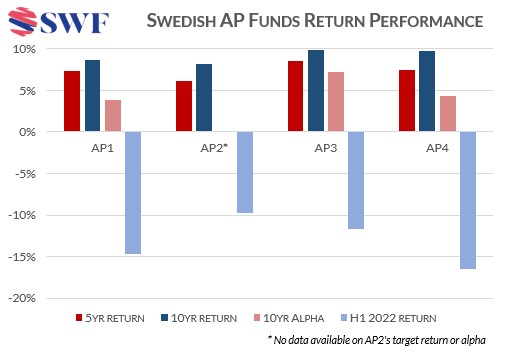 Undeterred by the mixed performance of alternatives, AP funds will continue to increase allocations to private markets, alongside the in-housing of asset management at the expense of external managers, who represent between 15% (AP1) and 26% (AP3) of total AUM. The development of private market expertise will lead to growth in recruitment of real estate, infrastructure, and private equity teams. Yet, in a world of market turbulence and high inflation, the funds will need to find safe bolt holes.

Sustainable infrastructure is set to tick all the boxes for AP funds seeking superior returns and an inflation hedge, as well as meeting their ESG targets. The turmoil of H1 appears to have concentrated the minds of Swedish pension fund leaders on climate change. AP1 CEO Kristin Magnusson Bernard wrote in the interim report that the Ukraine crisis “has exposed both vulnerabilities in the form of energy dependencies and energy security as well as the need for social and environmental trade-offs for a faster phasing out of fossil fuels. Other transition-critical elements – technological advancements in production, distribution and storage of energy, responsible mining of essential metals and minerals, concession processes and regulations that fulfil climate, environmental and social needs – are all now being discussed intensively by political decision-makers, business representatives and civil society.”

Last year saw AP2 Australian counterparts Australian Super and QIC in backing a US$2 billion investment in the US-based Generate Capital which focuses on sustainable infrastructure, including solar farms, waste-recycling systems and hydrogen-fuel plants. It will use the money to expand beyond North America into Europe, and sectors like water and agriculture.

Meanwhile, AP4 is aiming to halve the carbon footprint of its investments by 2030 with a goal of net zero by 2040 at the latest. Its targets are among the most ambitious set so far by public pension funds, which are reacting to policyholders’ demands for greater environmental sensitivity as well as investing in sustainable assets with potentially higher long-term returns than hydrocarbons-intensive sectors. The public pension fund announced last year that it had slashed the carbon footprint of its listed equities in half since 2010.

The evolution of the AP funds continues as they hunt for long-term yield for Swedish pensioners and whatever the past performance of liquid assets, the signs are that it is following the rest of the state-owned investor universe in diversifying alternatives strategies and developing expertise. 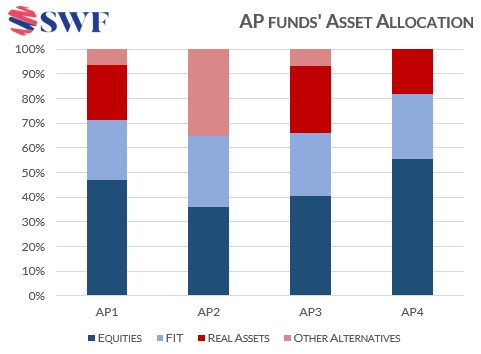