Norges Bank (NBIM) has reported that the Government Pension Fund Global returned -4.9% in Q1 2022, delivering a loss of NOK653 billion (US$73 billion), suggesting that sovereign funds can expect a rocky year ahead - but also that diversification in private markets could cushion the blow.

The fund’s liquid assets, which make up most of the portfolio, delivered significant losses. Return on public equity was -5.2%, while fixed income was -4.8%. In contrast, unlisted real estate returned 4.1%. The fund reported that its return was 0.7% above its benchmark.

GPFG achieved a 14.5%, its second-best return thanks to the stellar performance of US public equities. The fund’s return was 0.74 percentage points higher than the return on the benchmark index, equivalent to NOK76 billion (US$8.5 billion). The downturn in the first quarter of this year appears to have wiped out these gains, suggesting there is trouble in store across the sovereign investor universe.

Deputy CEO at Norges Bank Investment Management Trond Grande lay the blame on “geopolitical turbulence”, inferring that Russia’s invasion of Ukraine had impacted on the fund’s performance. Additionally, the krone strengthened against several major currencies in course of the quarter, contributing a NOK171 billion loss, although only accounting for part of the overall decline.

The positive performance of real assets in the GPFG’s return lends support to portfolio diversification, yet the Norwegian fund has been slow to progress with investment in real assets. 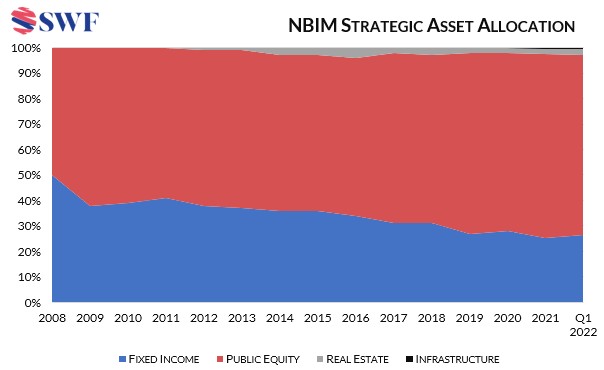 While the Norwegian fund has reported very strong performances in the past three years, it is still behind some other sovereign wealth funds and public pension funds in terms of six-year average returns: NBIM had an average return of 9.6%, behind those of NZ Super (11.8%), Alaska PFC (10%), CalSTRS (10%) and CPP (9.7%). This is largely due to its very conservative strategic asset allocation – and its failure to exploit private markets. NBIM lacks the significant alternatives allocation, which have supported the robust multi-year returns of peers. Moreover, the high proportion of public equities means that the fund is prone to volatility. Since the end of 2021 the fund’s overall value has fallen back to NOK11.5 trillion (US$1.3 trillion) today, according to the rolling figure displayed on NBIM’s home page.

NBIM is looking seriously at offshore wind in Europe, which it forecasts will rise four-fold to 102GW by 2030, and it is planning on making chunky investments. Although it has pledged to invest 1% of AUM in renewables by end-2022 (potentially equating to US$140 billion), so far it has pursued acquisitions of existing assets in developed markets rather than funnel liquidity into new projects to expand green energy capacity – notably its acquisition of a 50% stake in the Borssele 1 and 2 wind farm off the Netherlands for US$1.63 billion in April. With just 0.1% of AUM invested in the sector by end-March, NBIM looks set to miss its target for renewables allocation.

NBIM’s approach to renewables is similar to its cautious approach to real estate, which has focused on prime markets in developed economies. As a result of this self-imposed restriction, it has failed to meet its initial target of 7% in unlisted properties with a policy of investing in prime locations; the target was revised down to 5% but the current level is still 2.7%. Greater flexibility would enable NBIM to meet renewables objectives and portfolio diversification more easily.

Lengthy decision-making over choosing asset classes has constrained its ability to reach environmental goals. Altering its mandate can take years to push through parliament, by which time opportunities to invest early for strong returns have passed.