The Kuwaiti government has sold its last performing assets to the US$559 billion Kuwait Investment Authority (KIA) in a bid to bridge its yawning budget deficit as it struggles to pay its bills, but the ongoing fiscal problems and political resistance from parliament pose a challenge to the KIA's future.

The assets include stakes in Kuwait Finance House and telecoms company Zain, which are worth approximately US$2.0 billion and US$4.4 billion respectively. In addition, KIA now has control of the Kuwait Petroleum Corp, which has a nominal value of US$8.3 billion. The assets were transferred to the Reserve Fund for Future Generations (RFFG), a long-term savings fund intended to sustain the country’s economy when oil reserves are depleted.

The Gulf state was plunged into its financial woes by the collapse of oil prices, which are tracking well below the level deemed by the IMF as the fiscal breakeven oil price. It is also contending with mounting costs of the pandemic on its fiscal balance. Yet, Kuwaiti lawmakers have prevented the government from borrowing from international markets while at the same time opposed spending cuts. In 2021, the IMF forecasts crude prices at around US$40-50/b, which are significantly below the US$65.7/b required to breakeven – some have projected the breakeven price to be even higher.

The government is unable to dip into the RFFG without parliamentary authorization, while the General Reserve Fund (GRF) that is intended as a government treasurer is highly depleted. According to reports last year, the GRF saw massive drawn downs in the face of the pandemic with the expectation that it will soon be entirely depleted; an estimated US$15 billion of GRF money was burned through the fiscal effects of the pandemic alone, according to some estimates. 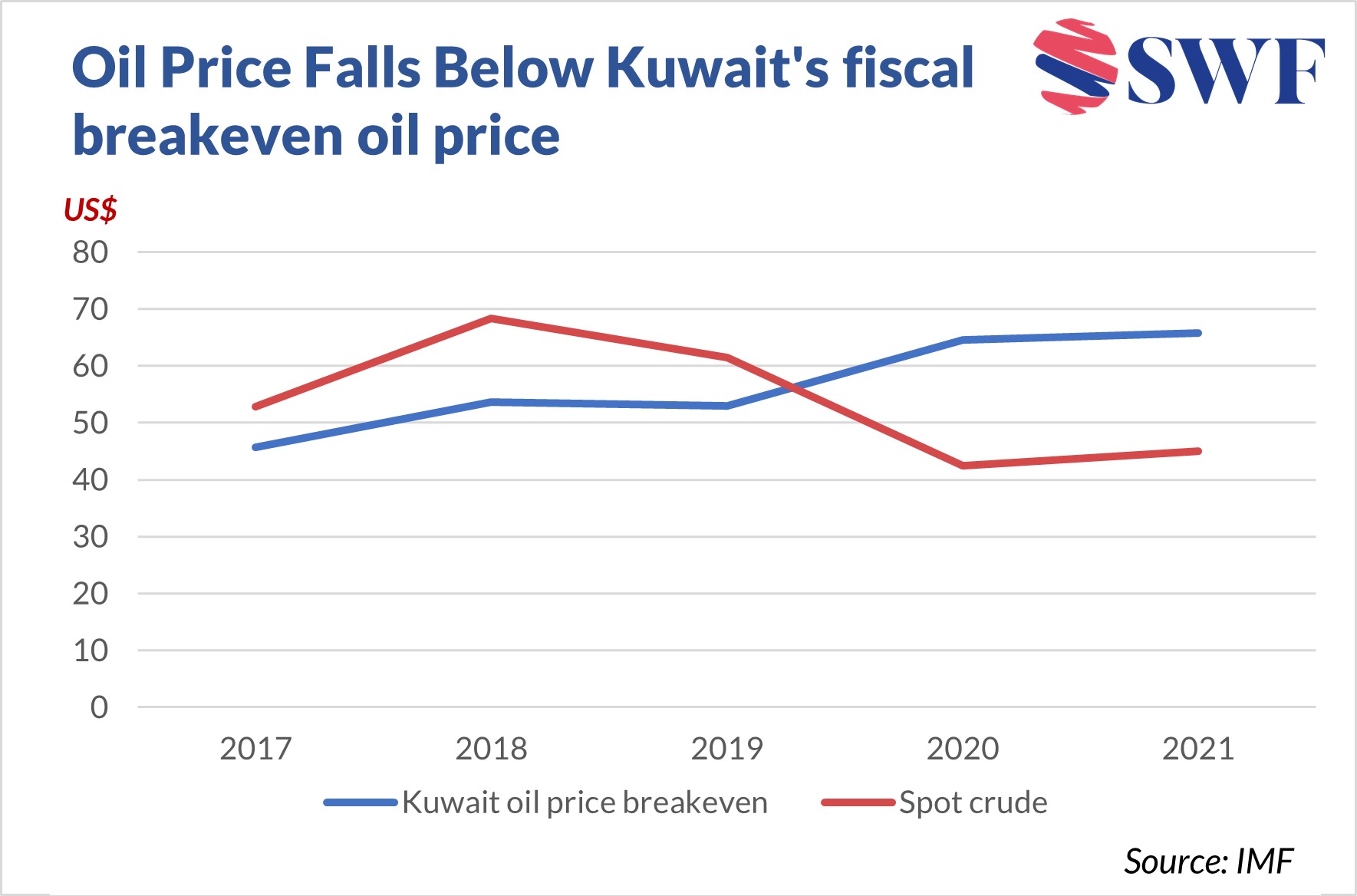 Despite using the KIA to cash in its remaining assets for US$14.7 billion, there are still doubts over whether it will be able to bridge its budget deficit for FY2021/22, which is projected at US$39.6 billion. Parliament’s decision to allow the government to halt the usual transfer of 10% of oil revenues to the FGF at times of fiscal deficit is not sufficient.  The inability to liquidate assets to fund the deficit is undermining the country’s long-term foreign and local currency issuer rating.

Kuwait is left with few options other than to continue to press the parliament to issue bonds on the domestic and international markets, take a loan from the RFFG, or issue a decree to overrule parliament. All options are fraught with political risks and obstacles. There are even more remote prospects for spending cuts in a country where the state is the main employer of Kuwaiti nationals and subsidies ensure they have a high standard of living.

Whatever option Kuwait takes in the coming year, there will still be an ongoing fiscal challenge that will place continued pressure on the FGF. Fitch Ratings’ assessments are worrying. In a report published in December, entitled “Sovereign Wealth Funds in the GCC” , the sovereign rating agency stated that even if a new debt law was passed that enabled about US$7 billion in net new issuance every year until 2026, “there would still need to be legislation allowing the use of the RFFG from 2021.”

Fitch forecasts that “the net annual transfer from the KIA would average just short of USD30 billion per year in 2020-2040,” on the assumption of 2% annual oil production growth, long-term oil prices of US$53/b and an improvement in the non-oil primary balance by around 1% of non-oil GDP per year. This baseline scenario would reduce sovereign net foreign assets from 607% of GDP in 2020 to 145% by 2040.