Korean pension funds dumped KRW146 billion (US$122 million) of domestic stock holdings on Tuesday, according to Pulse News, which brought the total for the year-to-date to KRW1.45 trillion (US$1.21 billion) – largely thanks to NPS, which had KRW169.5 trillion (US$141.8 billion) of Korean stocks at the last count, just over half of which is managed internally. The Korean pension fund sector has moved away from supporting the government in cushioning a domestic market rout to synchronizing with foreign institutional investors, who have withdrawn trillions of won from the market over the past few months.

According to Pulse News, “some suspect the NPS is building up ammunition to invest in LG Energy Solution”. It debuted as markets opened on Thursday (Korean time), with the battery manufacturer’s IPO attracting bids worth US$13 trillion. It priced its IPO at KRW12.8 trillion ($10.7 billion), making it the third most-valuable company after Samsung Electronics and SK Hynix with a nearly US$60 billion market valuation. NPS currently holds an 8.7% stake in Samsung Electronics and a 9.2% stake in SK Hynix, but at the time of writing it was unclear what size of stake NPS was set to take.

Added to that is NPS’s own portfolio rebalancing. The fund has a target allocation of 16.3% of its assets under management to domestic stocks, but at end-Q321 the level was 18.4% - although it is allowed a range of three percentage points either side of that target. 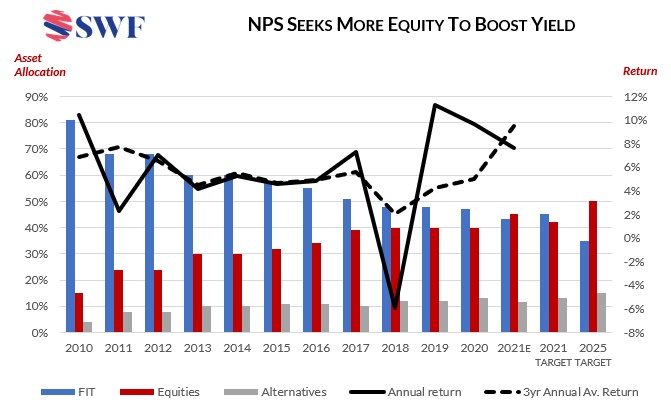 The shift is crucial to boosting returns and addressing the long-term prospect of depletion of the world's third biggest pension fund. The deals are part of the fund’s bid to raise allocations to alternatives from 10.9% at end-2020 to 15% by 2025. In 2020, it added a total of 15 managers for its global alternatives investments with a total of 160 overseas alternative investment managers engaged to manage US$58 billion in assets.

Overseas markets represent over two-thirds of investments in these three asset classes, suggesting that domestic public equity is being liquidated in favour of foreign investments. The Korean fund aims to raise foreign holdings to 55% of its portfolio by 2025, up from 35% in 2019. Given the fund’s size, a mere 0.5 percentage point reduction in domestic stocks means around US$4 billion flowing out of Korea into foreign assets.

The strategic shift makes sense for a fund that has a mandate to maximise returns for stakeholders – particularly bearing in mind the likelihood that it will be in deficit in 20 years and risks depletion by 2057, according to government projections. While a backlash will be loudly heard in a democratic society like South Korea, short-term discontent is a price worth paying to deal with the far greater challenge of the needs of an ageing national demographic.