New Zealand’s US$40.4 billion NZ Super celebrates its 20th birthday this week, after a year in which it reported its best ever return of 29.6%, beating its benchmark by 1.7%.

The fund was not set up as a public pension fund, but is a sovereign wealth fund that aims to “smooth over time and between generations the future increase in the cost of superannuation.” After a seven-year hiatus, the NZ Government resumed capital injections into the fund in FY2020/21. The fund is expected to cover 76% of the increasing costs due to an aging population over the years to 2083; it is expected to peak in size to approximately 40% of the country’s nominal GDP in the 2070s.

NZ Super has a high allocation to public equities, with 74% of AUM in public markets, including global and domestic stocks. This exposure enabled it to benefit from the leap in stock values over the financial year, ending June 30. Yet, it has also performed consistently well over the past decade. In terms of 10-year averages, NZ Super had an annual return of 13.4%, while the average since inception is 10.6%.

Success is driven by a clear mandate, good governance and ensuring strategy evolves with current and future trends. It is these factors that the fund believes has supported its performance over the years, rather than a specific asset class. 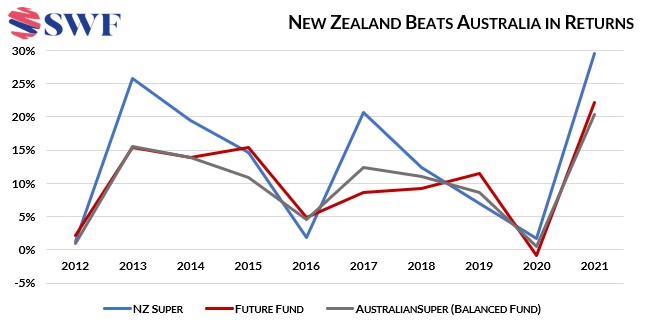 Speaking to Global SWF, NZ Super’s CIO Stephen Gilmore explained the fund’s out-performance, “Our five major success factors include (i) a genuine long-horizon as we do not expect to make any large contributions back to the Government until the 2050s; (ii) a fairly healthy risk appetite with a benchmark portfolio made up of 80 percent equities and 20 percent fixed income; (iii) a very strong governance structure; (iv) a portfolio that is fully currency-hedged; and (v) a very successful strategic tilting / dynamic asset allocation approach.

“Besides the five success factors, it is key that we stick to the program. A good example was COVID, where we did not reduce risk, but instead increased it by leaning in to a falling and cheapening equity market. In 2018, we publicized what would happen if we went through a repeat of a shock like the GFC. So when we had the shock in 2020 our stakeholders were ready.”

One of the stand-out features of NZ Super’s strategy is the decarbonization of its reference portfolio, which has helped support its strong return, adding an additional 0.6% per annum in return since 2016. In Global SWF’s Governance, Sustainability and Resilience scoreboard, the fund has one of the highest scores; in the 2021 review, it was joint second with Norway’s NBIM at 96%, behind Australia’s Future Fund which got top marks at 100%.

Gilmore explained, “We thought that our then carbon exposure meant that we were taking undue risk that was not being rewarded, so we reduced our exposure, and this happened to increase our returns. We are perceived as leaders in responsible investing, but the bar keeps rising so we’ve embarked on an effort to maintain our social license / best practice.” 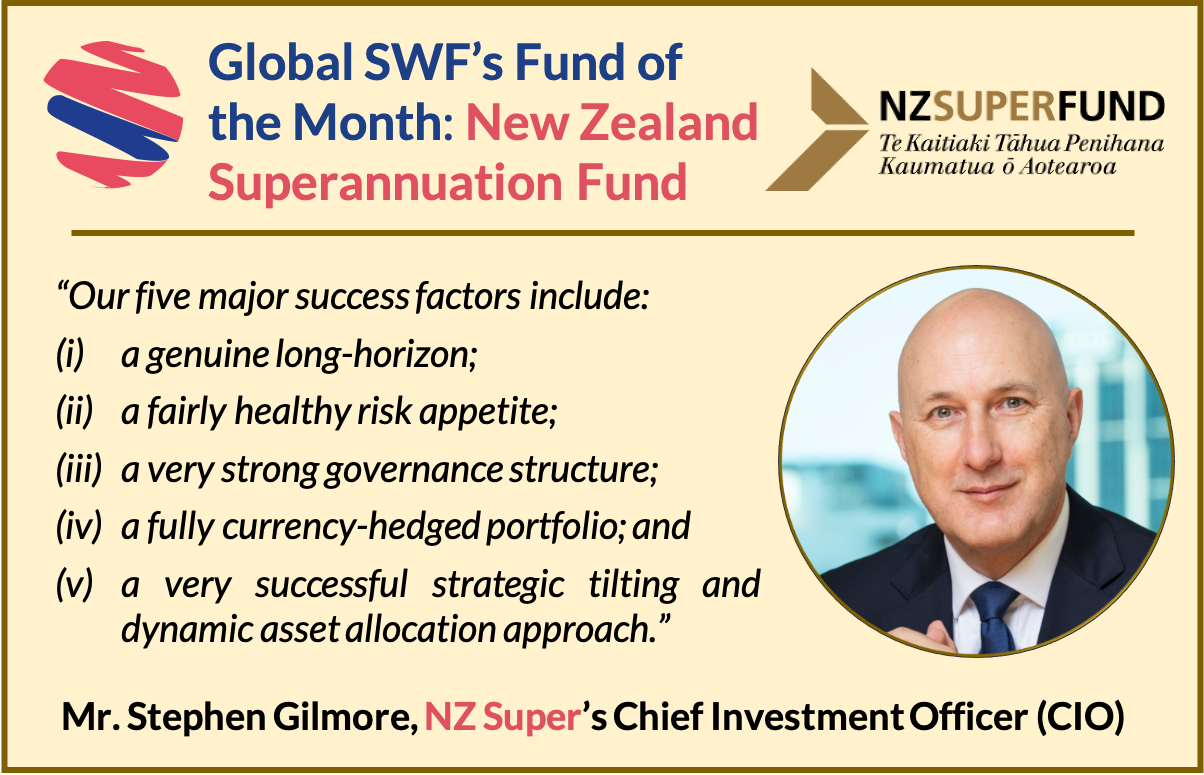