Khazanah Consolidates Funds, But Aviation is Still Caught in a Tail Spin

Malaysian sovereign investor Khazanah’s decision to merge its commercial and strategic funds is set to boost the performance of its investment portfolio – but while separating them from the negative effects of distressed assets such as Malaysian Airlines, it is kicking the can down the road in terms of the continued high risk exposures from the troubled aviation sector.

Three other portfolios include the Dana Impak portfolio (MYR6 billion), developmental assets (MYR4.5 billion) and special situation assets (MYR3.2 billion). Developmental assets have a national strategic focus with the goal of delivering a positive economic impact, whereas the special situation portfolio includes distressed assets that require an overhaul to achieve sustainable income flows, such as the Malaysia Aviation Group.

Approved by the board in November, the Dana Impak portfolio is in its early stages and little if any capital has so far been deployed, but Khazanah says some potential investments are in the pipeline. Its objectives are to increase Malaysia’s economic competitiveness and build national resilience with investments in the digital economy, tech, health, education, and food and energy security.

While the re-organization is set to boost the performance of the investment fund assets, attention is diverted from the pressing problem of Malaysia Airlines’ bailouts. There are no plans to partner with other airlines or divest the aviation group, although Khazanah claims that restructuring the national flag carrier has helped reduce liabilities on its balance sheet by MYR15 billion. 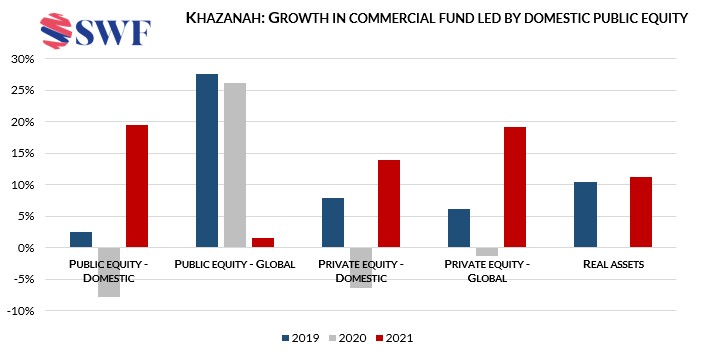 Khazanah has endured a rough ride since the inset of the pandemic, although ongoing restructuring has ensured it remains profitable and debt is being steadily cut even as dividends to the government grow. In 2020, it reported a dismal performance with annual profits slumping by 61% to MYR2.9 billion (US$715 million) as its domestic assets – comprising two-thirds of its portfolio – faced the impact of the economic thrashing in the wake of the pandemic. Malaysia Airlines proved to be a ball-and-chain for the fund as lockdowns hit global travel and disrupted supply chains – and while the hike in global energy prices will boost Malaysia’s upstream sector, aviation margins will be further squeezed by a combination of rising costs and sluggish demand.

In 2021, Khazanah’s profit slumped further to MYR670 million. It attributed the plunging profitability to the continued impact of financial assistance to airline and tourism companies affected by the pandemic as well as lower fair value gains and lower dividends from portfolio assets on the back of subdued 2020 earnings. Yet, high levels of dividends to the government are also providing to be a drain on Khazanah’s ability to reinvest its gains. In 2012-19, transfers to the government averaged around MYR970 million per annum, but in 2020 and 2021 it hiked the annual divided to MYR2 billion – even as the state-owned investor was faced portfolio companies experiencing major difficulties.

The commercial portfolio reported a 19% time-weighted rate of return and a 7% three-year rolling return. However, inconsistent and confusing reporting has made it challenging to understand the success of the fund’s performance; for 2020, it reported a 1.5% two-year rolling basis rate of return. Going forward, details are sketchy on how performance will be measured and quantified in each of the new portfolios, which have very different objectives.

In terms of asset class, the time-weighted rate of return was boosted by domestic public and private equities, which represented 61.5% of the commercial portfolio and rose from negative rates in 2020 to double digit growth in 2021. Real assets also improved their performance from a meagre 0.1% growth to 11.2%. In terms of foreign equity holdings, public market growth diminished from 26.2% to 1.6%, largely due to its exposure to China, while private equities went in the opposite direction from -6.4% to 13.9%. The strategic fund, however, remained in the doldrums with a -11.4% annual return and a -21.4% three-year rolling return, despite the completion of Malaysia Aviation Group’s restructuring process.

Even as the pandemic subsides, the Malaysian economy continues to face significant risks, notably the unwinding of the household credit boom, which has the potential to lead to a collapse in domestic demand.