Kazakhstan’s Samruk Kazyna sovereign wealth fund is hiring someone to help draft its new strategy and seeking to boost transparency and improve governance, just months after cutting half its staff to 124 personnel and closing offices in Beijing, Moscow and London and ahead of plans to divest portfolio companies.

Representing around 40% of Kazakhstan’s GDP, the US$69 billion strategic fund holds national oil and gas, energy, mining, industrial, transport and telecommunications assets – and the government is looking to divest these holdings in months to come.

Mass protests against hikes in fuel retail prices in January are seen by some Kazakhstan-watchers as ultimately the result of the mismanagement of Samruk-Kazyna’s portfolio companies under the previous administration of Nursultan Nazarbayev.

The failure to invest in gas processing plants and the problem of corruption in procurement undermined the profitability of fuel production – the management’s answer was simply to inflate gas prices, passing the cost to the consumer. The resulting unrest posed an existential threat to the state and Russian paratroopers were deployed to end the crisis in the vast Central Asian country, resulting in more than 200 deaths in the worst political crisis of its post-Soviet period.

Under an organizational overhaul prompted by President Kassym-Jomart Tokayev’s call for reform, earlier this year the Board reduced the number of management positions from 10 to five and changed rules for procurement. The shake-up is directed by Almasadam Satkaliev who was appointed chair of the board in March 2021, substituting Akhmetzhan Yessimov, who had faced stern criticism from Kazakhstan’s accounts committee over a lack of transparency and falling profitability.

Satkaliev made it his mission to end secret business deals and poor transparency, as well as inflated prices. Under Samruk-Kazyna’s new procurement rules, contracts will no longer be handed out to the holding’s portfolio companies.

In an effort to clean up the fund’s governance, this week Samruk-Kazyna and Kazakhstan's Agency on Financial Monitoring (AFM) signed a memorandum of cooperation on procurement services as the fund seeks to increase the transparency of its activities and its portfolio companies. The Agency intends to provide the Fund with information on any wrongdoing and financial crimes within the portfolio companies with a view to strengthening compliance, internal audit and risk management functions. The move is intended to win investor trust in the firms identified for divestment.

The government has already sought to purge Samruk-Kazyna of the cronyism that flourished under former President Nursultan Nazarbayev. In January the sovereign fund announced that Kairat Sharipbayev and Dimash Dossanov – the sons-in-law of former Kazakh president Nursultan Nazarbayev, who has come under fire from his embattled successor - had quit as chief executives of two portfolio companies: oil pipeline firm KazTransOil and natural gas pipeline operator QazaqGaz (formerly KazTransGas) respectively. Although Samruk-Kazyna gave no reasons, the move came amid a pledge by President Tokayev to move against the significant business holdings of the family of the former president. 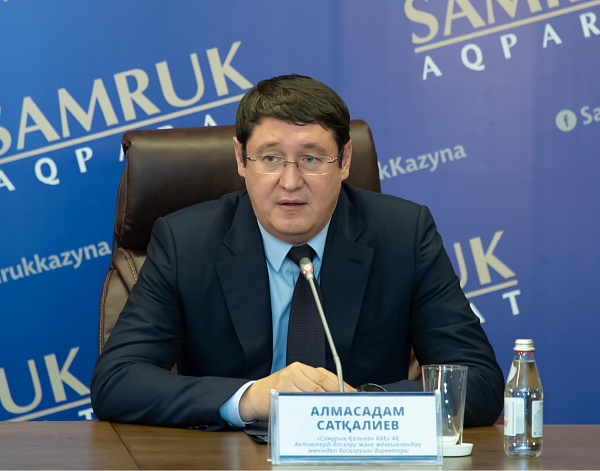 Improved Performance Ahead of Privatization

The fund has been buoyed by the post-pandemic recovery, thanks to its exposure to commodities, with vast improvements in profitability in Satkaliev’s first year in office. Last week, Nazira Nurbayeva, Managing Director for Economics and Finance of Samruk-Kazyna, announced that the fund would allocate KZT170 billion (US$376 million) to the national budget in 2022, following revenue of KZT11.7 trillion (US$25.9 billion) and profits of KZT1.6 trillion in 2021. After transfers to the government, profits will be reinvested in large infrastructure projects. The fund’s results exceeded all expectations and were largely attributed to the surge in oil prices, as well as a 59% increase in refined gold sales and 13% growth in national electricity production.

Samruk-Kazyna is the focus of economic liberalization efforts, intended to improve commercial competition and “demonopolise” sectors including oil, gas, electricity and rail. Kazakhstan's new prime minister Alihan Smaiylov indicated earlier this year that portfolio companies will be privatized from 2022, including IPOs in KazMunayGas (KMG), Air Astana and QazaqGaz in both the local bourse and on a foreign exchange, either New York or London; at least 20% of shares will be listed at KASE or Astana International Exchange.

Despite governance problems, the portfolio still has some strong performance. KMG’s IPO was postponed due to a fall in energy prices in 2020, but the strong recovery in prices and Kazakhstan’s massive untouched hydrocarbon resources mean it could be turn out to be a very successful listing.

Airlines Air Astana, FlyArystan and Qazaq Air, representing 80% of domestic air transportation, are a target for sale. While the global aviation industry has witnessed massive government bail-outs, Air Astana did not receive any financial support and reported profits in 2021 due to the high demand for its low-cost airline Fly Arystan. Air Astana booked a US$36.2 million net profit last year, marking a strong rebound from its US$94 million loss in 2020 and above the US$30.3 in 2019, before Covid-19 struck. Revenue for 2021 jumped 92% on-year to US$756 million. Last month, the Agency for the Protection and Development of Competition announced it was putting forward a proposal to spin off budget airline FlyArystan, followed by the sale of 51% of its shares. Qazaq Air is also slated for sale.

About 40 enterprises are planned to be put up for privatization in the group of companies of the Samruk-Kazyna holding during this period. The sale of assets will provide Samruk-Kazyna with capital for future strategic developments projects, which are set to involve close relationships with foreign state-owned investors.

The Kazakh fund is also pushing alliances with foreign sovereign wealth funds, including Qatar Investment Authority (QIA), which was cited as a potential co-investor in infrastructure, logistics, renewable energy, and the privatization program. Mubadala is set to become a major factor in the fund’s strategy. In February 2021, the Abu Dhabi investor’s green investment arm, Masdar, signed agreements with Samruk-Kazyna to explore joint initiatives in renewables. These included developing a 500MW wind farm project with operations beginning by end-2024. Oil-rich Kazakhstan aims to raise the share of renewables in electricity generation from 1% in 2020 to 10% by 2030 and 50% by 2050 by exploiting its huge wind and solar power potential.

French public investment bank Bpifrance is also set to become a long-term partner. At the end of October 2020, Samruk-Kazyna and Bpifrance announced the launch of a EUR100 million co-investment partnership for the development of bilateral trade. The agreement is dedicated to Kazakhstani, French, or joint-venture SMEs, and intermediate-sized companies operating in industry, agriculture, ecological and energy transition, education and health.