Bangladesh is following a growing trend of quasi-SWF infra funds with the launch this week of the Bangladesh Infrastructure Development Fund (BIDF), using a foreign exchange windfall for economic development. Yet, the BIDF carries the risk of potentially risky FX reserve depletion and the build-up of a bad loan portfolio that could ultimately undermine its purpose.

The BIDF aims to channel capital into strategic infrastructure with an initial focus on ports, but avoiding the ongoing problem of rising public debt. FX reserves have ballooned to more than US$44 billion due to growth in expatriate remittances and a slump in imports during the pandemic. Prime Minister Sheikh Hasina’s administration said it will keep FX reserves at no less than six months’ import cover with the surplus used for loans to public sector organisations in the infrastructure sector. With reserves currently covering eight months imports, around US$10 billion could be deployed for development projects at a rate of US$2 billion per annum.

The first investment is the dredging of the Ramnabad Channel at Paira Port, with BIDF announcing a finance agreement with Sonali Bank and Paira Port Authority on Tuesday. Overseeing the use of surplus reserves for the BIDF, the Bangladesh Bank – the central bank – is lending money to Sonali Bank to disburse to the state-owned port operator with the ultimate goal of transforming it into a deep seaport. Other ports earmarked for capacity expansion are Chittagong and Mongla with another port at Matarbari, potentially using the same funding structure. 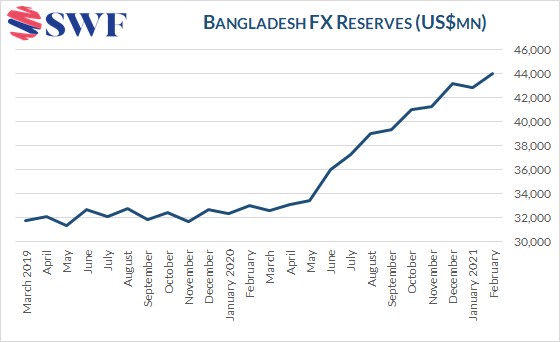 The BIDF is not seeking investment from foreign partners and its assets will not be equity investments. Instead, it will have a growing loan book, acting in the same way as multilateral lenders such as the Bretton Woods institutions, but without the cost of long-term external debt servicing for the government.

Political control of BIDF financing poses significant governance questions over its management as well as issues of competence. The selection of projects risks putting political priorities over commercial rationale. By seemingly eschewing collaboration with foreign investors in infrastructure projects, the BIDF will not benefit from the quality of expertise and commercial foresight of investment partners – particularly the state-owned investors that have supported NIIF’s infrastructure drive in India.

In the event of a default by the public sector borrowers, the government would have to step in as a sovereign guarantor and repay Sonali Bank. The prospect of a default is significant, particularly with likely delays in project execution. The purpose of the reserve drawdown would therefore be lost.

There are additional risks in the government’s assumption that six months’ import cover will be guaranteed going forward, after "surplus FX" has been lent to infrastructure projects. The surplus is a transitory phenomenon. Remittances are volatile and trade fluctuates, particularly during natural disasters that Bangladesh is increasingly facing due to climate change. A drawdown of reserves could place the country in a more vulnerable situation as imports recover and commodity prices grow - and if the country faces another devastating flood.

The situation Bangladesh has found itself in is unique. Before the pandemic, reserves were growing at a steady rate for some time due to the Bangladesh Bank's active intervention in the currency market to prevent an appreciation of the taka. Yet, the 30%+ surge in reserves in 2020 was due to an exceptional 40%+ remittance growth, as well as the slash in imports by more than 10% as the brakes were applied to economic activity in the wake of Covid-19. Basing a drawdown on such unusual circumstances is a high-risk strategy, particularly if the country faces balance of payments pressures in the future.

While port infrastructure would support exports, that boost will not be felt during the years of project execution - the impact of infrastructure development is long-term. There are also long-term balance of payments risks posed by the country’s depleting gas reserves, which could be exhausted within a decade. This scenario would cause an increase in dependence on energy imports to serve the needs of the country’s burgeoning population.

Use of FX reserves for investment also conveniently sidesteps the persistent problem of the country’s poor tax system. Ineffective collection keeps government consumption at just above 6% of GDP, while it runs up a primary deficit of 1-4% of GDP and, owing to cost of interest payments on public debt, a fiscal deficit of 3-6% of GDP. The seeding of the fund with FX reserves to spend on infrastructure, with the potential for the build-up of a significant non-performing loan portfolio, appears to be the wrong answer to Bangladesh’s infrastructure deficit.