The Ireland Strategic Investment Fund (ISIF), the country’s EUR14.3 billion (US$16.9 billion) sovereign wealth fund, has reported a solid 5.2% return for H121 bringing its total gains since the beginning of 2020 to EUR1 billion (US$1.2 billion).

The fund said it made 10 investments over the first half, bringing total commitments to EUR5.2 billion (US$6.1 billion) across 151 investments as well as catalysing a further EUR8.9 billion (US$10.5 billion) of co-investment commitments since inception. Among its recent investments is a EUR42 million (US$50 million) allocation to Stripe to help the global payments tech company add over 1,000 jobs in the Irish economy over the next five years.

Global SWF estimates that, as a result of the investment, ISIF’s total investment in Ireland’s technology, media, and telecom sector is now around US$1 billion (US$1.2 billion). The deal met the sovereign wealth fund’s “double bottom line” mandate of investing for commercial return and economic impact. ISIF is hoping Stripe’s expansion will help more than 10,000 Irish businesses to expand into new global markets over the next five years. 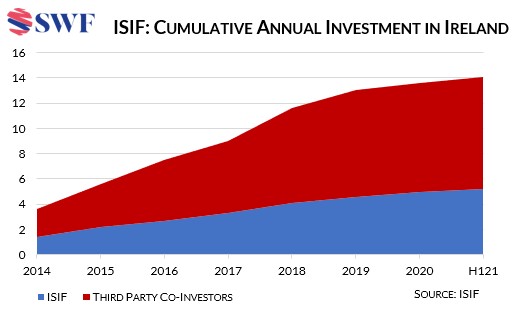 Over the first half, the fund also maintained its private credit activity with a EUR50 million investment in DunPort Capital Management Fund to lend to lower mid-market companies with earnings of EUR1-10 million in Ireland and the UK. It also provided leading Irish payments and technology company Fexco with a EUR20 million (US$24 million) debt facility to support its growth. Its tech-orientation was notable in other investment activity, suggesting ISIF is keen to help Ireland capture some of the movement of capital from the UK following Brexit, with a particular focus on tech-oriented solutions in finance and healthcare.

Like other SWFs, ISIF is looking to a post-pandemic recovery with a focus on new technology and energy transition. Under its EUR2 billion (US$2.4 billion) Pandemic Stabilisation Recovery Fund (PSRF) to support businesses affected by Covid-19, ISIF has made direct and indirect investments in businesses total EUR613 million (US$725 million) across 30 businesses, platforms and projects and has EUR920 million (US$1.1 billion) of potential investments in the pipeline. These include a EUR150 million (US$180 million) recovery loan to national flag carrier Aer Lingus to strengthen the airline's liquidity position.

With the boost in gains over 2020 and 2021, ISIF has announced a EUR1 billion (US$1.2 billion) investment in Ireland’s climate action projects over the next five years, representing a major impact investment in the Irish economy as it transitions to net zero. ISIF has set out four priorities for investment: energy efficiency, energy storage, renewables, and improved resource efficiency, including investment in forestry.

ISIF’s director Nick Ashmore, who took the helm in February after the retirement of Eugene O’Callaghan, said, “ISIF plans to make both direct and fund-based investments aligned with this strategy, partnering with major global investors where appropriate, and will make further announcements over the coming months. We look forward to continuing to invest and be a catalyst for Ireland’s transition to net zero.” 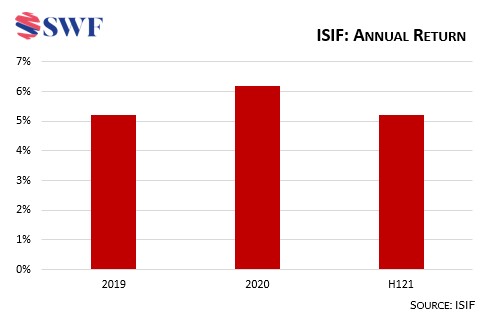