Investors are eager to take a slice of equity in plans for a US$1.4 billion fertilizer plant in Nigeria - spearheaded by the country’s sovereign wealth fund, the Nigeria Sovereign Investment Authority (NSIA), which allocates half its US$3 billion portfolio to national infrastructure .

With annual capacity of 750,000 tonnes of ammonia and 1 million tonnes of phosphate fertilizer, the planned plant will help transform the country from a net importer to an exporter of fertilizer, potentially boosting West Africa’s relatively low agricultural yield as well as monetizing gas that is currently flared.

The plant is due to come online in 2025 and will be supplied with Nigerian natural gas and Moroccan phosphate. The project is currently at the development stage with equity equally shared between the Nigeria Sovereign Investment Authority (NSIA) and Morocco’s OCP.

“There’s a lot of liquidity in the market at the moment. You have a 100% offtake guaranteed, so it’s easy to fund a project like that. We are confident that somewhere in the international market and local market we will be able to raise debt.”

Orji claimed that as well as national oil company NNPC, four private sector entities had expressed an interest in equity stakes in the project.

Commenting more broadly on NSIA’s strategy, Orji stated that NSIA’s Stabilization Fund - representing 20% of its total assets and set up as a liquidity pool for federal budgetary support - is cutting its US Treasury exposure, having achieved a return of 6% in 2020. Orji told Bloomberg TV: “I’m very worried about rising interest rates. We were very bullish across most asset classes last year. We’re more cautious now.”

NSIA may also trim its allocation to public equity in the Future Generation Fund portfolio, which represents the fund's long-term savings pool and 30% of total AUM. However, rather than drastically cut exposure to the asset class, the CEO stated that NSIA is looking mostly at shifting from tech stocks due to expensive valuations and towards pharma, aviation and consumer discretionary in anticipation of a post-pandemic economic revival, as well as emerging markets. 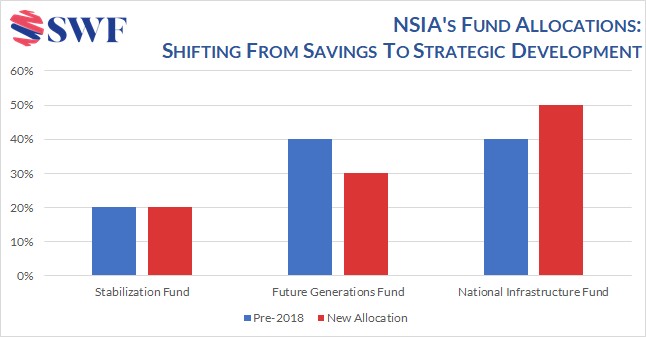 NSIA remains committed to its National Infrastructure Fund (NIF), which represents 50% of AUM. Fertilizer production is crucial to the development of the Nigerian economy and boosting incomes in rural areas.

Located in the southeastern state of Akwa Ibom, the NSIA-backed plant also promises to help address the structural weaknesses of Nigeria’s agricultural sector. Fertilizer use in Nigeria is just 5.5kg per hectare of arable land, which is low even for sub-Saharan African (SSA) levels, which average 16.1kg and well below the world average of 140.6kg, according to FAO statistics. Nigeria accounts for up to a half of West Africa’s harvested land area, so the market potential is significant.

The NSIA-backed plant joins a number of other plans for world-scale fertilizer plants in Nigeria, which promise to drive a green revolution in the country and beyond. The Indorama Fertilizers plant in Eleme added a 1.6 million tonnes urea line in Q121, increasing its annual production capacity to 3 million tonnes. It was joined by the Dangote Group's new 3 million tonnes granulated urea fertilizer complex. Nigeria-based Brass Fertilizer is planning a petrochemicals complex that will include annual urea capacity of 1.3 million tonnes, but has been subject to lengthy delays. If all projects are realized, they will secure a four-fold increase in fertilizer capacity from 2020 to over 8 million tonnes per annum fertilizer production by 2025.

One key issue is the high cost of fertilizer with SSA prices almost double the global average. International fertilizer companies have avoided investment due to payment delays and failure to control smuggling. A poor operational environment, economic problems, and lack of physical and financial infrastructure are also contraints that have deterred investment in the sector, but are being gradually overcome.