Intel Deal Could Give Mubadala Massive Boost for VC Drive

Abu Dhabi sovereign wealth fund Mubadala could earn up to US$30 billion from selling its semiconductor business GlobalFoundries to Intel - US$10 billion more than the enterprise value estimated earlier this year when it mooted an IPO.

The talks come in the context of a semiconductor drought, which is disrupting a range of manufacturing sectors, such as consumer electronics and the automotive industry. Carmakers have reduced output and idled plants due to the shortage, which was exacerbated by lockdown measures that boosted demand for microchips and led to a global shortage. The shortage is expected to be short-term, but underlines the importance of investment in strengthening supply chains.

GlobalFoundries grew out of a joint venture between the Abu Dhabi government’s Advanced Technology Investment Co. (ATIC) and Sunnyvale, California–based Advanced Micro Devices (AMD). In the initial transaction, AMD contributed to GlobalFoundries’ semiconductor manufacturing facilities in Dresden, Germany, while ATIC invested US$1.4 billion. In exchange, each partner received equity securities and ATIC assumed debt securities. ATIC owned 66% of GlobalFoundries and AMD 34%. In 2011, AMD sold its stake and ATIC was consolidated under Mubadala as a wholly-owned subsidiary. Mubadala chose to invest in semiconductor manufacturing, a capital- and energy-intensive high-tech industry, because it met all the requirements for Abu Dhabi’s development plans.

Acquisition of GlobalFoundries would enable Intel to raise output at a time of peak demand, particularly in the automotive industry as it begins to increase production in line with the global recovery. GlobalFoundries has grown to become one of the world’s leading chip manufacturers and stands in a neutral position amid the US-China trade war. To date, the company has 10 fabrication plants across the world, most of which are in Singapore following the acquisition of Singapore’s Chartered Semiconductor Manufacturing in 2009.

In common with other sovereign wealth funds, Mubadala is revamping its structure and seeking to become more nimble in grasping opportunities as it sets out to achieve AUM of nearly US$500 billion by 2030. The Abu Dhabi government had already consolidated Mubadala with two of other state-owned investors operated by the emirate: the International Petroleum Investment Co. (IPIC) and the Abu Dhabi Investment Council (ADIC).

Global SWF data show that Mubadala is increasingly targeting earlier stage investment rounds with an emphasis on disruptive tech. Since the consolidation of the three funds in 2018, Mubadala has moved from acquisitions heavily oriented to chunky stakes in the energy sector (which represented nearly 80% of investment) towards venture capital in tech and retail (which together comprised 85% of capital deployed).

Our data shows Mubadala made 23 direct private equity transactions worth US$10.6 billion in 2020, of which US$6.3 billion was committed to strategies overseen by Apollo, Silver Lake and Barings - this is in addition to its allocations to other private market segments, such as real estate and infrastructure. Of the remaining 20, 14 were venture capital and mostly in Series A to C funding rounds.

The trend so far in 2021 has seen further focus on early stage VC at a rate of at least one investment per week, implying a potential doubling of private equity transactions this year. Private equity investment by Mubadala so far this year totals US$3.44 billion in 32 transactions, equating to an average transaction value of around US$108 million, which is down from US$463 million in 2020.

Whether Mubadala opts for an IPO or a private sale, the funds will release more liquidity for greater exposure to areas of growing interest to Mubadala as it seeks to boost returns and reach its AUM target. 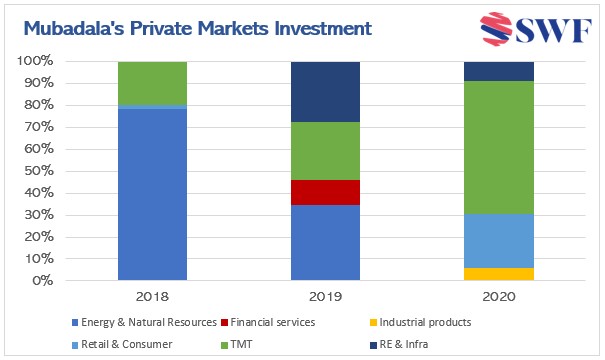