Australian inflation soared to a 32-year high in Q3 amid rising costs of house building and energy prices, and if sustained it could challenge AustralianSuper’s returns targets. The US$189 billion pension fund’s problems are an example of the challenges all public pension funds are facing, across the world.

Data from the Australian Bureau of Statistics (ABS) today showed the consumer price index (CPI) jumped 1.8% in Q3 quarter, while the annual rate shot up to 7.3%, from 6.1%, the highest since 1990 and almost three times the pace of wage growth. The rates of price growth are far higher than forecast in the federal government’s FY2022/23 budget, which was based on 3.5% CPI inflation. GDP growth is also well below the Reserve Bank’s March forecasts of 4.3% in 2022 and 2.0% in 2023; it now forecasts 3.2% and 1.8%, respectively.

Rising inflation challenges AustralianSuper’s targets, with investment options targeting inflation-beating yields, from the High Growth option (CPI + 4.5%) to the Stable option (1.5%). The Balanced option represents around 90% of the fund’s AUM and targets CPI+4.0%. It returned -2.7% for FY2021/22, over five years it was 7.3%, and over 10 years it was 9.3%, according to Damian Moloney, Head of Investments, International, in an interview with Global SWF earlier this month.

With the Australian federal government forecasting 5.8% in FY2022/23, the targets rise to a range of 7.3-10.3%. This is a tall order, given the negative returns in FY2021/22 and a portfolio that is heavily skewed towards the Australian market, which represents half of the fund’s total AUM. AustralianSuper’s lack of regional diversification means it is heavily impacted by domestic economic trends, while also serving 1.13 million Australian members.

AustralianSuper is not the only inflation-hit fund, with the Future Fund – Australia’s federal sovereign wealth fund – set to struggle to meet its absolute return target of 4-5% above CPI, having seen a -1.2% return in FY2021/22. Nevertheless, Chairman Peter Costello said the full-year performance was a “pleasing outcome” given global stocks and bonds fell more than 10% and Australian stocks had declined 6.5%. On the publication of the fund’s annual report, Costello said, “We expect deglobalisation, geopolitical tensions, trade barriers and high inflation to be a feature of the investment climate going forward.”

CEO Raphael Arndt added that the fund had benefited from an increased allocation to alternative assets “where inflation aware strategies have performed strongly.”

On the CPI-linked returns target, Costello said, “This was probably written in the days when it was expected that inflation will be 2-3%. If you get an inflation rate of 6, 7 or 8, the CPI plus target will be extremely difficult to attain. In fact, in the current environment, you just won’t do it. That’s a big challenge. This target was not written for high inflation rate society. And hopefully inflation will be brought down, and we can continue to work to the target.”

Of course, missing the returns targets in one year is unlikely to significantly affect. Targets are focused on medium- to long-term averages. The Future Fund is tracking well ahead of its target and has enjoyed a 7.8% annualised return since its inception in May 2006, above the 6.8% target, and adding A$134 billion to the federal government’s coffers.

While the lack of portfolio diversification could be seen as a risk, Australia is also seen as a highly investable market by foreign sovereign wealth funds and public pension funds, with GIC recently opening its new office as it ramps up activity in the country. Indeed, the Singaporean sovereign fund’s CEO Lim Chow Kiat stated that Australia is a haven from global market uncertainty and turbulence due to its potential in the energy sector and relative low debt levels.

Lim said, “As every country deals with this inflation challenge, we think Australia can handle this relatively well. If there are suitable projects or assets in Australia, our infrastructure team will definitely want to look at it very closely.” 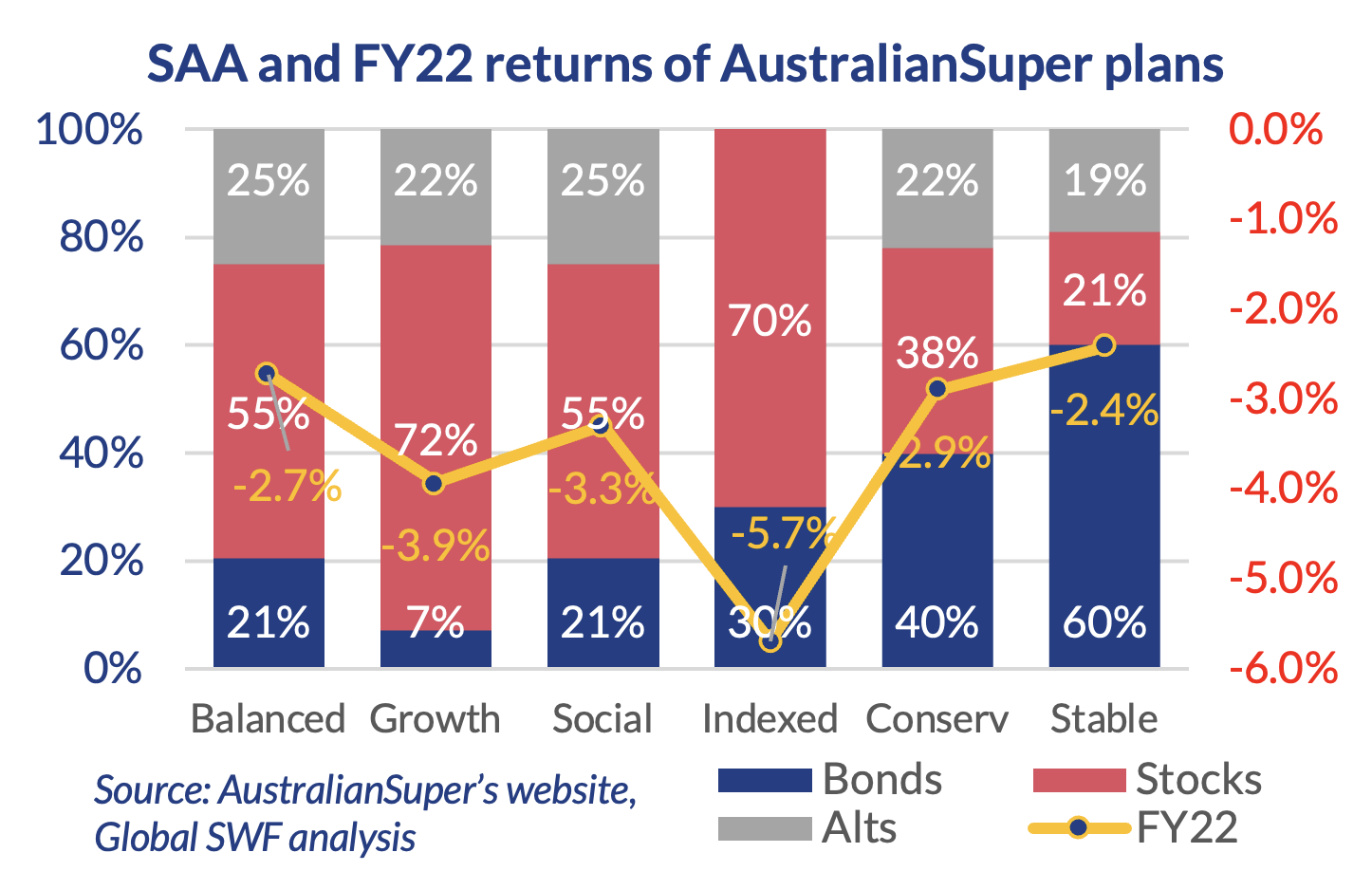