Graham’s visit to India was topped off with the signing on Monday of a INR53 billion (US$696 million) joint venture with TATA Realty and Infrastructure. The JV will be seeded with two assets with a value of INR80 billion alongside an intention to further allocate capital investment of up to INR20 billion for future acquisitions of Grade A office buildings.

Earlier this month, it established a Sustainable Energy Group (SEG) which combines its Energy & Resources (E&R) and Power & Renewables (P&R) groups. Graham said SEG possesses US$18 billion in assets with India a target market for investment as the portfolio aligns to Paris Agreement targets. In February, the public pension fund committed itself to achieving net zero by 2050 by “increasing investment in green and transition assets to at least C$130 billion by 2030 and building on our decarbonization investment approach.”

The US$432 billion fund already possesses a sizeable minority stake in ReNew Power which it boosted in February after buying part of Goldman Sach’s share in the solar and wind generator. Conscious of both rewards and risks of investment in India, CPP Investments is seeking partnerships and investments in funds to enable it to share risk and intelligence with experienced market players and choose assets that best meet its risk/reward profile. The Canadian fund says that altogether it has invested C$12 billion (US$9 billion) in India and “the country is core to our global, long-term investment strategy.” 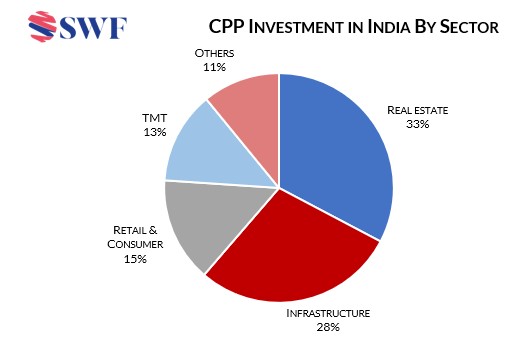 CPP has not always been successful in advancing its renewables efforts in India, with two major investments falling at the last hurdle. The Economic Times reported in February that TATA and CPP were in advanced talks alongside Singaporean sovereign fund Temasek Holdings and private equity firm General Atlantic to raise as much as US$600-700 million for the renewable energy business at an equity valuation of around US$6-7 billion. Tata Power has one of India's largest renewable energy businesses with an operating capacity of 2.6GW comprising wind and solar with plans for a 10-fold growth in capacity by 2030. However, Mubadala and BlackRock were later announced as the subsidiary’s investors.

Negotiations with SoftBank to acquire its 80% holding in renewables producer SB Energy Holdings for US$525 million fell through last May amid concerns over debt and project delays. CPP had sought condition precedents that included meeting project commissioning deadlines, securing new businesses, bond issuance, and SoftBank bearing any future liquidated damages liability for acquiring this stake.

CPP’s exposure in India is broader than renewables. Real estate represents a third of CPP’s Indian alternatives portfolio, mostly in offices, while infrastructure makes up 28%, including a commitment to the country’s quasi-SWF the National Investment and Infrastructure Fund (NIIF). The retail and consumer sector is the third biggest target sector with a focus on venture capital in leading e-commerce and delivery platforms, such as Zomato, Flipkart and Delhivery.

Tech is also a strong part of CPP’s private equity investments in India and this month was no exception with the fund ramping up its support to VerSe Innovation Private Limited, one of India’s leading content technology platform companies, with US$425 million. VerSe Innovation operates Dailyhunt, one of India’s largest local language content platforms; Josh, one of the country’s largest short video platforms; and PublicVibe, a fast-growing hyper local video platform.