How Will Mexico Rebuild its Stabilization Fund?

Mexico felt the economic blow of draconian containment measures to tame soaring death rates – and a corresponding hit to public finances. Faced with a choice of borrowing, raising taxes or tapping into stabilization funds, Mexico opted for digging into its rainy-day fund.

With no ceiling on withdrawals, by the end of 2020 its stabilization fund, the Fondo de Estabilización de los Ingresos Presupuestarios (FEIP), was just about fully depleted. Elected in late 2018, the administration of President Andrés Manuel López Obrador – popularly known as AMLO – preferred to exhaust FEIP’s resources within two years instead of increasing taxes or raising debt.

FEIP was set up to compensate for any fiscal shocks caused by lower economic activity, falling oil prices or depreciation of the peso so that budgets are executed as planned. It can be used by the Government to reach a surplus greater than 1% of the GDP, which happened during 2019 (US$6 billion withdrawal). In this sense, it fulfilled its purpose amid the economic turmoil and oil price collapse that followed in the wake of the pandemic. The Fondo Mexicano del Petróleo para la Estabilización y el Desarrollo (FMPED) serves as a second line of defense in the event of the fall in public revenues once the FEIP has been exhausted, but the government would be reluctant to start draining its savings pool. 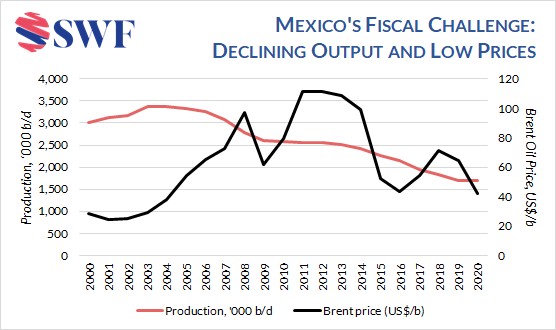 There were already doubts about AMLO’s commitment to FEIP, at least in its current form as a means to avoid an unanticipated budget deficit. In 2019, the government was pondering using part of FEIP – then valued at US$15.4 billion – to pay Pemex’s enormous debt obligations, which AMLO has set out to address. The administration had also mooted shifting FEIP’s purpose from budgetary support to counter-cyclical investment, based on Chile’s model with copper revenue. Whatever its future plans, the government is now faced with the difficult task of rebuilding the fund in the context of continued low crude prices and falling oil output.

The fund relies on oil revenue levies and a percentage of excess oil revenues, when the oil price is higher than forecast in the budget. Yet, the revenue directed to FEIP is unlikely to be as strong as previous years. MXN7.55 billion (US$365 million) was transferred to its coffers by the Fondo Mexicano del Petróleo in January, 17% down over the previous year and over a third less than in 2019. FEIP's income mirrors crude prices. While there is an expectation of a price recovery in 2021, it will not return to pre-pandemic levels fast.

The long-term challenge is to boost oil revenue - and in a time of low prices, that means increasing barrel volumes. Although Mexico has the third biggest oil reserves in Latin America, it has suffered from a chronic lack of investment and access to more efficient technologies. As a result, it has seen its reserve base cut in half over the past 20 years, falling to just under six billion barrels, according to the latest BP Statistical Review of World Energy.

The current administration is taking an increasingly hostile approach to IOCs, which could limit efforts to grow oil reserves. AMLO is slowing the oil industry’s liberalization and announced a moratorium on oil exploration at end-2018 and in June 2019 cancelled onshore auctions for joint venture partners with Pemex. As such, exploration will be confined mostly to Pemex, which faces the challenges of growing debt and falling oil output as well as technical limitations in exploiting offshore resources.

Pemex will remain Mexico’s biggest fiscal risk due to debt, losses and the drain on public resources – something that is unlikely to change in the future. With its debt at junk bond status, restrained capex means its E&P efforts are financially challenging and less likely to yield big increases in proven reserves and output.

Meanwhile, the government has ruled out raising taxes or creating new ones, but instead is looking to broaden the revenue base through strengthened tax administration. Yet, there is great uncertainty as to when this will be introduced – if it is introduced at all. Additionally, the MXN300 billion (US$15 billion) foreign exchange surplus that AMLO had hoped for did not materialize after peso strength at end-2020 reduced Banxico’s profits, resulting in a much smaller transfer to the federal government.

AMLO is therefore faced with a fiscal quandary and it is difficult to see where FEIP’s rehabilitation fits into his plans. What is certain is that FEIP is not currently in play to provide liquidity for the budget and AMLO’s options are narrowing. There may be more rainy days ahead with the government needing GDP growth of over 5% if it is to meet its conservative fiscal targets.