How Will China's Tech Crackdown Impact on Temasek?

China’s crackdown on consumer technology companies is having a chilling effect on the country’s attractiveness to venture capital, but although Temasek appears to have the most to lose it is continuing to plough millions into Chinese startups.

The Rise and Fall of Chinese Tech VC Values

From 2016, the Singaporean state investor is the biggest state-owned investor in Chinese startups, representing 40% of SOI venture capital. It is followed by its stablemate, Singapore’s sovereign wealth fund GIC, which represents another 20%, followed by China’s own fund CIC (13%) and Malaysia’s Khazanah (8%). Added to that is the capital deployed by the SoftBank Vision Fund, which won US$45 billion from Saudi Arabia’s PIF and US$15 billion from Abu Dhabi’s Mubadala. Since 2018, SoftBank Vision Fund has plunged around US$12 billion in Chinese private equity with exposure to these tech-driven consumer segments, from TikTok creator ByteDance to the world’s most valuable AI pioneer SenseTime.

But billions of dollars have been wiped off startup values as the government moves from sector to sector – from edtech to gaming – to clip the wings of Chinese Big Tech, wary of their growing power within China. The slash in asset values should be of concern to Temasek in particular, with 27% of its portfolio exposed to China – more than its exposure to its home market.

The moves by the state began in October when Alibaba’s billionaire co-founder Jack Ma – whose teams have developed super apps that handle taxi hailing, food delivery and e-payments – admonished regulators for stifling innovation. In response to a blistering challenge from an increasingly powerful plutocrat, the government quashed its finance subsidiary Ant Group’s IPO and initiated an anti-monopoly case against Alibaba, resulting in a US$2.8 billion fine in April. Ma vanished and his net worth plummeted.

Last month, regulators demanded DiDi apps be removed from online stores after its US$4.4 billion IPO in the US, amid cybersecurity concerns. State-owned investors have not escaped impact of just those two cases and Temasek was a backer of both. Temasek- and GIC-backed e-commerce giant Meituan’s stock price has also halved since its peak in February.

Edtech is the latest concern as the government seeks to confront the huge amounts of speculative venture capital that has flowed into profit-making online tutoring, which threatens the government’s cultural hegemony. The value of Temasek-backed edtech firm Kuaishou’s stock is little more than a quarter of its peak during its blockbuster first week of trading in February.

Ordered by the government to go non-profit, Edtech platforms have lost their ability to go public and investors like Temasek have no exit. Moreover, foreign capital was banned from the sector, posing massive headaches for both Temasek and GIC as well as the SoftBank Vision Fund. The Singaporean investors have plunged hundreds of millions into Tencent-backed Yuanfudao, which has now postponed its planned IPO.

The crackdown is a reminder that China is not the US and inward investment matters less than maintaining a grip on the status quo. Investment must align with Beijing’s political priorities. Many within and without China sympathise with Beijing for taking action that they think is long overdue. Monopolies like Ma’s empire are seen as fettering innovation and the emergence of smaller companies, which should flourish because of regulatory enforcement.

Bloomberg’s Shuli Ren pointed out that “Beijing is concerned about four pillars of stability: banking, anti-trust regulation, data security and social equality. All of Beijing’s major interventions reflect these concerns… President Xi Jinping doesn’t care if stock investors, many of them foreigners, lose billions of dollars. He knows that China’s middle class will have his back. They like these regulatory crackdowns.”

SOIs such as Temasek are likely to wise up to the risks, rather than withdraw from Chinese venture capital markets. The Singaporean investors may have had their fingers burned, but they are perhaps the most assiduous and flexible strategic investors when it comes to China – and their horizons are long-term. Lessons will be learned. 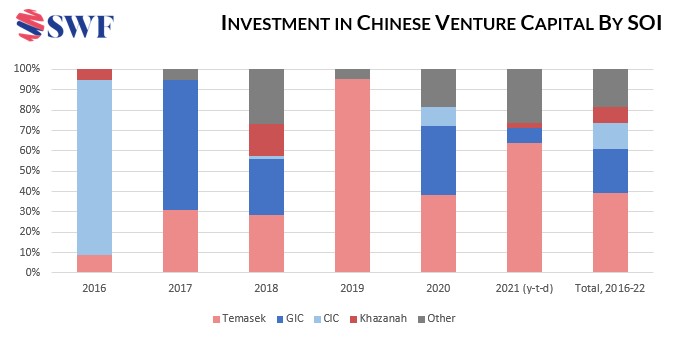 Is India an Alternative?

Some pundits have claimed that India’s hot VC market is a preferable alternative to China. Indeed, Temasek is seeking to ramp up its exposure to India – a trend that began well before China flexed its muscles against home-grown Big Tech. The strategy makes sense, given the country’s rapid digitalization and imminent surge in tech IPO, as Global SWF predicted earlier this year. Its India portfolio exposure rose from US$9 billion in FY20 to US$14 billion in FY21 and has declared a “positive bias” towards China’s arch-rival. With a high skills base, India will be positioning itself as a Western ally amid rivalries with China, creating a regulatory environment that provides better protections for tech companies than China’s opaque system.  The result is a growing herd of Indian unicorns.

Yet, far from abandoning China, Temasek continues to ramp up its interest in startups with more than US$900 million deployed so far this year. Biotech and life sciences, gaming and e-commerce continue to attract its interest, from a Series A round in the Didi Chuxing Freight Unit spin-off in January to last week’s Series B round for Guangzhou Lupeng Pharmaceutical as it develops new drugs for cancers and the hepatitis B virus. Indeed, if Temasek sustains the rate of investment seen so far this year, it could turn out to be a record year for its backing of Chinese VC, regardless of its pivot towards India.

India is also not without challenges with an economy further back in the development curve. There are risks facing SOIs in their bid for growth in the Indian digital economy, especially when engaged in venture capital investment in loss-making startups with big ticket valuations. The number and size of funding rounds have yielded massive capital injection, which has in some cases diluted stakes – and if private equity funding rounds or IPOs don’t match expectations, there is a danger that asset values come under attrition.

Temasek has already suffered a significant setback with Indian ride-hailing app Ola. Opting out of funding rounds has diluted its stake. The app’s value has fallen from over US$4 billion when Temasek invested US$225 million in Q3 2018 to US$3 billion in a Q1 2021 estimate, amid the attrition of the pandemic.

China Could Set the Trend

China may also be setting a trend for global action against Big Tech as governments seek to regain control over data resources and information flow, which are seen as a significant threat to both political stability and personal privacy – as well as not paying their “fair share” of taxes. Moreover, there is an ongoing concern that Big Tech firms are smothering innovative startups. The narrative against Big Tech crosses political divides, from which consensus is emerging over reining in the power of these corporations.

If the trend is towards greater, harder and faster enforcement against Big Tech, China is hardly going to be a loser and could end up benefiting from being ahead of the regulatory curve – rewarded with continuing venture capital investment from state-owned investors and others.