With crude prices soaring past US$100/b amid geopolitical risks generated by Russia’s invasion of Ukraine, sovereign wealth funds in the Gulf region are set to be flush with liquidity and free from fiscal pressures.

While the Covid-19 pandemic was a major headache for Gulf states grappling with a slump in energy consumption in 2020, this year looks like the situation has flipped with the pandemic receding and the Ukraine crisis delivering a oil revenue windfall.

At the end of February, Brent spot prices reached US$103/b, representing 66% growth year-on-year. According to IMF figures, in 2021 the fiscal breakeven oil price for Saudi Arabia and Oman exceeded Brent by a large margin, while the UAE just about matched its breakeven oil price. The situation is likely to be a lot easier this year for government finances of oil exporting countries, while energy assets are driving growth in SWF portfolios.

In Kuwait, the KIA has faced withdrawals amid low oil prices and the reluctance of parliament to approve government borrowing. In February 2021, the government sold its last performing assets to the SWF in a bid to bridge its yawning budget deficit as it struggles to pay its bills, including stakes in Kuwait Finance House and telecoms company Zain, which are worth approximately US$2.0 billion and US$4.4 billion respectively. In addition, KIA was given control of the Kuwait Petroleum Corp, which has a nominal value of US$8.3 billion. The assets were transferred to the Reserve Fund for Future Generations (RFFG), a long-term savings fund intended to sustain the country’s economy when oil reserves are depleted. The government is unable to dip into the RFFG without parliamentary authorization, while the General Reserve Fund (GRF) is intended as a government treasurer and was highly depleted in 2021. An estimated US$15 billion of GRF money was withdrawn in 2020 due to the fiscal effects of the pandemic alone, according to some estimates.

The crisis in Ukraine has lifted a burden off the Kuwaiti government’s shoulders. In early 2021, the IMF had forecast crude prices at around US$40-50/b, which are significantly below the US$65.7/b required to break even. Through much of the second half of the year, oil prices were above Kuwait’s fiscal breakeven, suggesting that for FY2021/22 Kuwait will cover its budget deficit through a surge in oil revenue. While the price needed to balance the books remains the same in 2022, the price surge has shot well above this level, leading to the potential to rehabilitate the GRF. The RFFG receives a minimum of 10% of all state revenues and 10% of the net income of the GRF, which will lead to a massive shot in the arm for KIA’s investment ambitions.

Kuwait’s vibrant parliamentary democracy offers a degree of insight and accountability that can be hard to find elsewhere in the Middle East’s sovereign investor universe, although there is diminishing clarity around KIA’s two funds and how liquidity is affecting them.

The OIA is also relied upon to cover Oman’s budget deficit, although the pressure eased considerably in 2021 as crude prices were just a shade under the breakeven price and this year promises to yield a fiscal surplus.

Elsewhere, there have been fewer pressures for withdrawals, even as oil prices collapsed. ADIA was tapped for billions in funding for the fiscal deficit following the oil price crash of 2015-2016, but was left untouched during the pandemic with the UAE. 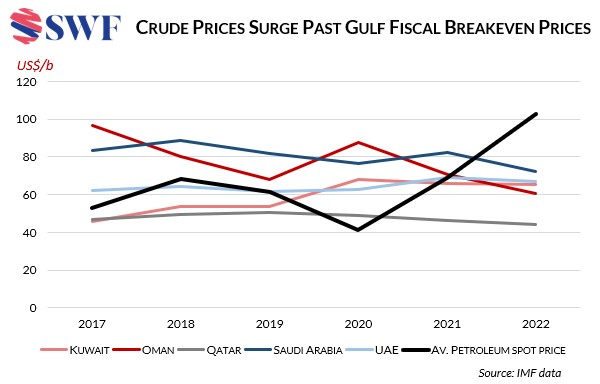 Aside from the potential withdrawal pressures faced by funds with a stabilization function, the price of oil also has an influence over the liquidity of those funds with large oil assets. KIA’s ownership of KPC ensures that it stands to benefit from both rising crude prices and increase production capacity to 3.5 million b/d by 2025 from 2.7 million b/d output in 2020 with the prospect that OPEC could ease quotas in 2022 in response to the Ukraine crisis. The likely bonanza will see the Kuwaiti fund pour billions into global markets, largely via external managers.

Last month’s transfer of a 4% stake in Aramco to Saudi Arabia’s Public Investment Fund (PIF) provides not only significant dividends on the tailwinds of the oil price surge but also potential for divestment to fund private equity. Within the space of just a couple of weeks, the value of the stake rose US$10 billion as the Ukraine invasion rocked markets.

Mubadala also possesses a large oil and gas portfolio with energy and natural resources representing 27% of its AUM and worth a total of US$66 billion in 2021 – and potentially a lot more given commodity price movements. These assets are mostly a legacy of IPIC, which merged into Mubadala in 2017.

For QIA, however, the largest asset in its energy portfolio is also its riskiest. As Global SWF highlighted this week, the Qatari fund spent US$11 billion for a 18.5% of energy giant Rosneft. The stake went from a US$13.5 billion peak in November 2021, to US$4.9 billion today. While other SWFs are set to gain from their energy sector assets, QIA stands out as a big loser.

The boost in portfolio values as well as increased dividends from energy assets will be used to diversify investments and national economies – with the exclusion of ADIA, which is prohibited from investing at home. Gulf states are acutely aware that they cannot be complacent when oil prices are high as future economic development and social stability depend on weening themselves off oil dependence and exposure to commodity price volatility. Funds with a strategic investment focus are set to utilize the oil windfall for renewables, as pioneered by Mubadala. The merger of renewables assets by Abu Dhabi’s biggest energy asset owners under the ownership of Masdar, which was originally established by sovereign wealth fund Mubadala, is accelerating its push to develop its global portfolio of solar and wind generation plants.

Speaking to Global SWF in January, Mubadala’s Chief Strategy & Risk Officer Ahmed Saeed Al Calily said, “As a responsible investor, we are committed to supporting the economic diversification of Abu Dhabi while leaving a positive lasting impact on the communities where we invest worldwide. As we progress with our activities and ambitions, we will continue to align ourselves with the Economic Vision 2030 including supporting a large empowered private sector, maintaining strong and diverse international relationships, and optimizing the UAE’s resources.”

PIF also has an economic diversification goal, aligned with Crown Prince Muhammad bin Salman's Vision 2030, as it invests in a wide range of non-oil sectors as well as real estate and infrastructure in the Saudi economy. With a goal of reaching AUM of US$2 trillion by 2030, the fund is running an aggressive strategy of expansion and will squeeze what it can out of its Aramco stake for both economic development and long-term yield.