India is set for another injection of sovereign capital in its fast-growing renewable energy sector with new pledges of investment by Canadian, Middle Eastern and Singaporean funds.

India gets around 74.4% of its electricity from coal-fuelled power plants, which frequently run out of coal and rely on expensive imports. The incentive to switch to low and zero carbon energy is driven by the simple economic reality that in India renewable energy is now cheaper to generate than electricity produced from burning coal. Yet, the task is immense.

India plans to install 450GW of renewable energy capacity by 2030 and is hungry for inward investment, relying heavily on the patient capital of global sovereign wealth funds and public pension funds. Currently, renewable generation is 158GW, suggesting an average of 42GW needs to be added every year to reach the end-decade target. India’s government has committed the country to net zero emissions by 2070. With a population of 1.38 billion and growing, India is the world’s fourth biggest emitter after China, the US and the European Union. Yet, it has some of the lowest per capita carbon dioxide emissions, at 1.9 tonnes per person in 2019 compared with 5.5 tonnes in the UK and 16 tonnes in the US.

Global SWF estimates that SOIs have invested around US$5 billion into India’s renewables energy sector, a third of which comes from GIC with Canada’s Caisse de dépôt et placement du Québec (CDPQ) contributing 22% and the Abu Dhabi Investment Authority (ADIA) 19%

Greenko, which is majority owned by Singapore’s GIC with ADIA a minority shareholder, has signed pacts with Adani Green Energy and Aurobindo Realty & Infrastructure to invest US$16 billion in renewable projects in the southern state of Andhra Pradesh (AP). The deal was signed on the sidelines of this week’s World Economic Forum at Davos, according to Reuters.

The full details have yet to be disclosed, but Adani Green Energy will stump up US$7.7 billion in a 3.7GW pumped hydro storage project and 10GW solar power project. The remaining US$8 billion will come from the other two partners, focused on hydro, solar and wind power.

In February, India’s quasi-sovereign wealth fund the National Investment and Infrastructure Fund’s (NIIF) Ayana Renewable Power announced it had partnered with Greenko to store 6GWh of power in hydro pump storage plants that Greenko is building at Pinnapuram in AP.

AP’s Chief Minister Y.S. Jagan Mohan Reddy is hoping to secure a threefold rise in the state’s renewables capacity to 33GW from the current 10.8GW of capacity. Currently, renewables represent nearly 40% of total generation capacity in a state with a population similar in size to South Korea. 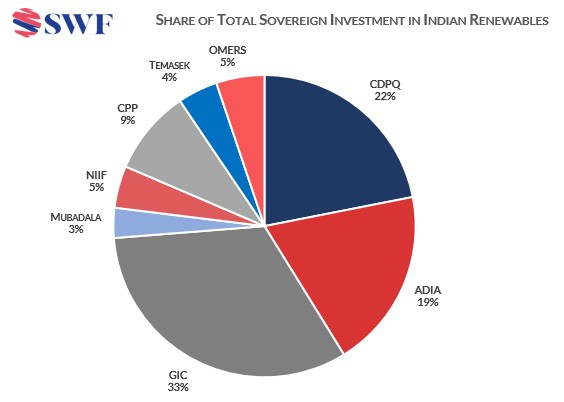 Canadian public pension funds are also leaders in sovereign investment in Indian renewables. In a recent interview with The Mint, the Ontario Municipal Employees’ Retirement System (OMERS) global head of infrastructure Annesley Wallace and the managing director for infrastructure Delphine Voeltzel said the fund was pushing to expand its investment in wind, solar and hydrogen power.

OMERS has a 21.4% stake worth more than US$200 million in the NYSE-listed Indian renewables company Azure Power Global, which is 53.4% owned by another Canadian public pension fund, CDPQ. Delphine told The Mint: “We have a preference as much as possible to deploy capital in our portfolio companies because we already know them and are comfortable with the management. If we think it makes sense for Azure to foray into green hydrogen, that’s an area that we will consider. (However), if it’s a decision for Azure not to go into that area then we are not averse to go into that space with a different company.”

Canada’s biggest public pension fund CPP Investments announced it is set to ramp up investments in Indian renewables. The US$432 billion fund already possesses a sizeable minority stake in ReNew Power which it boosted in February after buying part of Goldman Sach’s share in the solar and wind generator. Conscious of both rewards and risks of investment in India, CPP Investments is seeking partnerships and investments in funds to enable it to share risk and intelligence with experienced market players and choose assets that best meet its risk/reward profile. The Canadian fund says that altogether it has invested C$12 billion (US$9 billion) in India and “the country is core to our global, long-term investment strategy.”

During his visit to India last month, CEO John Graham said the fund’s Sustainable Energy Group (SEG) possesses US$18 billion in assets with India a target market for investment as the portfolio aligns to Paris Agreement targets. In February, the public pension fund committed itself to achieving net zero by 2050 by “increasing investment in green and transition assets to at least C$130 billion by 2030 and building on our decarbonization investment approach.”

Despite all these commitments, progress is currently lagging government targets due to bottlenecks in the electricity grid and a lack of power purchase agreements. On top of these challenges is the government’s efforts to boost local manufacturing of solar power equipment through the imposition of customs tariffs, which risks dampening investor interest due to possible higher costs. Covid-19 has merely added to the problems facing the sector, with disruption to supply chains and travel as well as slower consumption growth.

Global SWF previously highlighted the problem of outstanding payments to solar power generation companies by cash-strapped distribution companies in India, which is eroding foreign investor confidence in the sector and could potentially hit the earnings of foreign state-owned investors.