According to the latest filings in the Bombay Stock Exchange (BSE), GIC has been very active in the Indian public markets, and its holdings have increased to US$ 14.8 billion in the quarter ending on September 30, 2021.

GIC recently bought five new stocks (notably, HDFC Life) and increased the weight in 13 companies, including Tata Steel, Bharti Airtel and Reliance Industries. In the past five years, the Singaporean investor has increased its Indian public holdings five-fold, to become the largest State-Owned Investor in the BSE.

According to Global SWF Data Platform, GIC has also invested over US$ 2 billion in Indian private companies, including real estate and venture capital, in 2021 alone. It maintains an office in Mumbai since 2010.

Norway’s NBIM, which is known for holding over 1.5% of all global stocks, has also demonstrated trust in the Indian markets, and has doubled its holdings in the past two years, to US$ 6.9 billion. Other investors including CPP, ADIA and KIA have maintained a more modest profile, especially when compared to their holdings in the US and Chinese markets.

Do not miss our special analysis on US, Chinese and Indian public equity holdings by State-Owned Investors in our 2022 Annual Report, to be released on January 1, 2022. 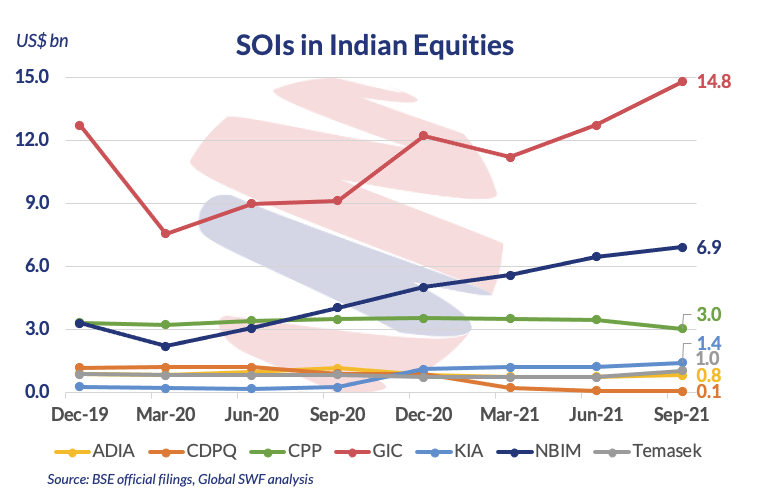