Norges Bank’s external managers are out-classing internal managers in active equities strategies, claims a group of experts commissioned by the Norwegian Ministry of Finance. Yet, tentative steps into real assets have yet to prove any superior performance – and a culture of risk aversion could be holding the fund back.

The diversification into real estate, which was intended to bolster long-term yields, has also failed to impress. According to NBIM, there was no value added in the real estate portfolio. In a letter by governor Øystein Olsen and CEO Nicolai Tangen to the Ministry of Finance reviewing the management of the fund, it said that it had generated “approximately the same return and slightly lower volatility since 2011 compared to a hypothetical fund without real estate… Over the same period, the trade-off between return and risk in the fund has been marginally better than for a hypothetical fund with no real estate.” 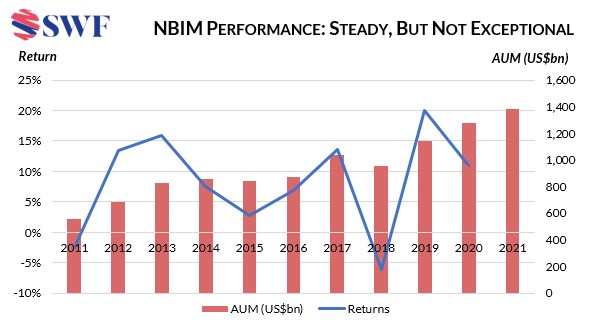 NBIM also stated that since 2016, GPFG’s unlisted real estate portfolio had generated an annual return of 5.9%, below the 6.2% return for an MSCI real estate index adjusted for sectoral and geographical differences.

NBIM started investing in non-listed real estate in 2011 and now has acquired a significant real estate portfolio. It has failed to meet its initial target of 7% in unlisted properties with a policy of investing in prime locations, which meant it had to deploy tens of billions of dollars in cities with limited investment opportunities. Norges Bank failed to do so and had to revise their target to 5% (the actual number is still 2.5%).

NBIM has also pledged to invest 1% of AUM in renewables by end-2022 (potentially equating to US$140 billion), but has so far it has pursued acquisitions of existing assets in developed markets rather than funnel liquidity into new projects to expand green energy capacity – notably its acquisition of a 50% stake in the Borssele 1 and 2 wind farm off the Netherlands for US$1.63 billion in April. Whether this will generate alpha is uncertain, but investment in relatively mature assets and the narrow focus on developed markets could again limit returns.