The White House’s pledge, on Earth Day, to slash carbon emissions by at least 50% by 2030 is an ambition that will attract a slew of capital from the world’s State-Owned Investors (SOIs) and stimulate global investment in low-carbon energy generation. Global SWF looks at the latest developments in SOI policy and investment.

Most governments have signed up to the Paris agreement on climate change and their sovereign wealth funds are following suit. The One Planet Sovereign Wealth Funds has attracted 15 SWF signatories, pledging to fight climate change with their financial might. Public pension funds are also reacting to policy holders’ demands for greater environmental sensitivity with several joining the Net Zero Asset Owners Alliance - described recently by UN General Secretary António Guterres as the "gold standard" for net zero commitments.

Regulations are increasingly aligned with climate change objectives and initiatives such as the Task Force on Climate-related Financial Disclosures and the Network for Greening Financial Services are highlighting climate change as a financial risk. Having a greener portfolio therefore promises potentially higher long-term returns than hydrocarbons-intensive sectors, as well as ensuring stability and resilience.

SOIs are setting out their own net zero targets to meet the Paris agreement goals. In February, Sweden’s AP4 announced it was aiming to halve the carbon footprint of its investments by 2030 with a goal of net zero by 2040 at the latest, representing among the most ambitious set of commitments so far by public pension funds.

Exclusions are a popular and instant way of reducing exposure to companies whose activities contribute to climate change. In January, Dutch public pension fund manager APG sold its stake in the Korean Electricity Power Company (KEPCO) after the company went ahead with the construction of new coal-fired power plants in Indonesia and Vietnam, despite protestations ahead of the decision.  APG’s largest client, civil service pension fund ABP, aims for a climate neutral portfolio by 2050, in line with the Paris climate agreement.

Over the pond in Canada, the Paris Agreement is also guiding investment decisions with the “Maple 8” funds representing C$1.6 trillion of assets issuing a joint statement in November committing to environment goals, including implementing common standards and disclosures to assess investments. Following this agreement, in January the Ontario Teachers’ Pension Plan Board (OTPP) announced its commitment to achieve net-zero greenhouse gas emissions by 2050. Its strategy is not just focused on exclusions, but also impact investment with a rise in capital allocation to climate-friendly investments and solutions and working with portfolio companies to achieve net zero emissions by 2050.

In recent days, CDPQ's real estate subsidiary Ivanhoé Cambridge announced an ambitious program aimed at achieving net zero carbon for its international portfolio by 2040. CDPQ's 2020 Stewardship Investing Report, released this week, shows the Quebecois fund has slashed the carbon intensity of its portfolio by 38% since 2017, well above the goal of 25% by 2025, with C$36 billion (US$28 billion) in low-carbon assets. The fund's success owes much to its attention to carbon auditing of all assets, not just focusing on the obvious exclusions.

SOIs are increasingly broadening their scope from exclusions and investments in externally managed funds to active, direct investment – and infrastructure portfolios are taking the bulk of climate-sensitive capital.

Renewables Are the Choice for Infra Portfolios

At a strategic level, renewable energy chimes well with SOIs’ long-term investment horizons and ESG commitments, as well as providing a stable return on investment. Global SWF believes there are now the perfect conditions for rapid growth in low carbon energy production with the US set to become the focus of attention.

Despite the Trump administration’s push for more fossil fuel energy and his apparent indifference to climate chance science, the US was already a major target for investment in renewables. Global SWF data shows that the US comprised 56% of SOI commitments to renewables in 2020.

The Biden administration’s US$2 trillion accelerated investment program to rebuild the economy, including an intense focus on renewables infrastructure, should set the US on course to meet the ambitious climate progress demanded by its re-commitment to the Paris Climate Accord. However, this could be at the expense of energy sector investments, such as mid-stream oil infrastructure, which still play a significant role in the portfolios of some SOIs.

Canadian public pension funds represented approximately 85% of the capital deployed by SOIs in US renewables over the past five years, although they also have a strong presence in US oil and gas infrastructure that they may decide to exit. Investments in 2020 included CPP Investments’ takeover of Pattern Energy Group, which has 28 renewable energy plants, predominantly wind farms, with an operating capacity of 4.4GW and a total asset value of US$6.1 billion. Meanwhile, CDPQ committed US$1 billion to Invenergy, the largest private developer, owner and operator of wind and solar projects in North America with 25GW of capacity, to support its growth.

Although the year to date has not seen a significant direct investment in US renewables by SOIs, Global SWF expects a surge of capital into the sector in months ahead as SOIs scramble for assets in the sector to meet their ESG objectives and net zero targets. 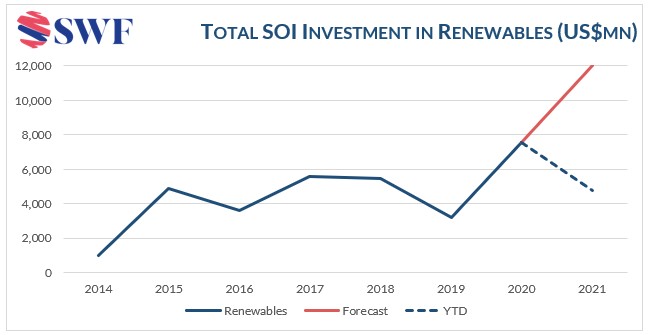 The US will not be the sole focus of attention, with Europe also gaining ground as the region’s governments strive to meet carbon emission targets. This year has so far seen two major SOI investments in the European renewables sector. Italian sovereign wealth fund Cassa Depositi e Prestiti Equity (CDP Equity) forged a deal with Italy-based oil producer Eni last month to establish 1GW of solar and wind generating capacity. The joint venture, GreenIT, will be owned 51% by Eni and 49% by CDP Equity, investing a total of EUR800 million in the renewables projects by 2025.  Earlier this month, NBIM acquired a 50% stake in the 752MW Borssele 1 and 2 wind farm off the Netherlands for US$1.63 billion as it began its effort to target 1% of AUM in renewable energy in developed markets by end-2022. NBIM is looking seriously at offshore wind in Europe, which it forecasts will rise four-fold to 102GW by 2030, and it is planning on making chunky investments.

Developed Asia is also coming into view as a growth area with SOIs tending to partner in co-investments, rather than directly invest alone. In 2020, ADIA and OTPP backed Singapore-based Equis Development’s US$1.25 billion project pipeline in Asia-Pacific markets. This year, Powering Australian Renewables (PowAR), a partnership between AGL and Australian SOIs QIC and Future Fund, bought Tilt Renewables’ Australian business, which has 20 wind farms that are operational or under development.

With growing opportunities in developed markets, emerging markets seem to be falling by the wayside. In past years, India led EM renewables investment by SOIs. India’s independent solar and wind power generators have been major beneficiaries of investment in rapid expansion of electricity generation. The South Asian behemoth attracted around US$4 billion from ADIA, GIC, CPP and CDPQ in some of its leading renewable energy producers.  Yet, outstanding payments to solar power generation companies by cash-strapped distribution companies in India is set to erode foreign investor confidence in the sector – and will potentially hit the earnings of foreign state-owned investors. However, risks did not stop CPP from buying an 80% stake in SB Energy Holdings from SoftBank for US$425 million at the end of 2020.

The scale of Indian market potential means investors are sticking with it, albeit more cautiously as they evaluate risk-return profiles. India is by no means the only opportunity in emerging markets. Mubadala’s green investment arm, Masdar, is pushing into frontier markets in the Commonwealth of Independent States to develop their massive clean energy potential. In February, it signed agreements with Kazakhstan’s sovereign wealth fund Samruk-Kaznya to explore joint initiatives in renewables. It signed an agreement to develop a 500MW wind farm project with operations beginning by end-2024, having achieved financial close of the 100MW Nur Navoi Solar Project, Uzbekistan’s first independent solar power project. Also in March, Masdar signed a deal with  DTEK, Ukraine’s largest private power producer, to examine potential clean energy investments.

In the home market, Mubadala is spearheading the development of a green hydrogen economy. The Abu Dhabi Hydrogen Alliance brings together Mubadala, the increasingly active Abu Dhabi Developmental Holding Company (ADQ) and national oil company ADNOC to “establish Abu Dhabi as a trusted leader of low-carbon green and blue hydrogen in emerging international markets.” The alliance is seeking to extend the use of hydrogen as an energy source in utilities, transportation and industry.

The move to invest in the domestic hydrogen economy comes just two months after Mubadala signed up to the One Planet Sovereign Wealth Funds (OPSWF) framework, which seeks to commit sovereign investors to meeting climate change targets set out in the 2015 Paris Agreement. The state-owned investor pledged to “leverage its scale and global presence to drive positive change through the endorsement of the OPSWF Framework to reduce greenhouse gas emissions, mitigate the effects of climate change and create sustainable market outcomes.”

With so much attention on renewables, there may not be enough wind and solar farms to satisfy investor demand – at least in low risk markets – and asset prices could be inflated by the high pace of acquisitions. Increasingly, we are seeing diversification along the value chain in venture capital and joint ventures in areas such as battery technology and AI applications in electricity supply. While some SOIs are well advanced, for some there will be a steep learning curve and in-house capacity and organisation need to adjust to fit climate change strategies. 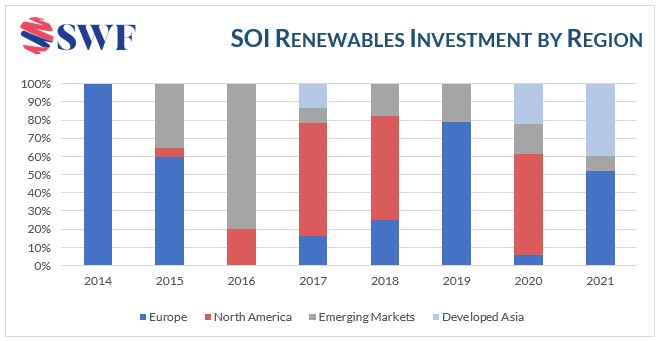