Dutch pension fund manager APG is looking to invest in a new 4GW offshore wind farm as part of the Noordzeker consortium, in alliance with an unknown investor.

APG claims its bid for the development has been received positively by policy holders and Dutch citizens in general. The bids are targeting lots located in the IJmuiden Ver wind farm zonewith tenders scheduled to open in 2023 and wind farms operational by 2028.

Jan-Willem Ruisbroek is Head of Global Infrastructure Investment Strategy at APG, said, “We have contracted in a handful of high-calibre people like former CEOs of utility companies – people that have been running this kind of construction projects themselves – in an advisory capacity. We do not have the skills to decide what the foundation should look like or which turbine to choose. We have found a partner that brings that expertise.”

So far in 2022, we have observed strong growth in investment in European renewables by state-owned investors. Compared to 2021, in the year-to-date sovereign investors have allocated US$5.5 billion to renewables in Europe, up 13%, while investment in developed Asian economies nearly doubled to US$3.65 billion. However, North American and Emerging markets investments in renewables have more than halved.

Europe is highly vulnerable to the energy politics surrounding the Russian intervention in Ukraine, which is set to break the EU’s reliance on Russian energy supplies in order to cushion it from the economic fall-out from Russia-NATO tensions. In  May 2022, the EU launched plans for a massive increase in solar and wind power with the European Commission stating the bloc needed to find an extra EUR210 billion over the next five years to pay for phasing out Russian fossil fuels and speeding up the switch to green energy. The plan proposes upgrades to the EU green deal, the EU’s flagship policy to confront the climate crisis. The Commission proposed raising the targeted renewables contribution to the EU’s energy mix from 40% to 45% by 2030. About EUR12 billion of the extra spending would be needed to build LNG terminals and upgrade oil plants to allow EU member states to switch to non-Russian fossil fuels.

Sovereign wealth funds and public pension funds are set to be among the main partners for this drive. The drive to develop clean energy aligns with the kind of strategy many SOIs have already been deploying in their push to both de-carbonise their portfolios and gain exposure to long-term structural trends.

APG announced in May it had teamed up with its Ontario counterpart OMERS to acquire Groendus, a new leader in the Netherlands’ energy transition, from investment company NPM Capital. The takeover is OMERS's first investment in the Netherlands and was conducted via subsidiary OMERS Infrastructure.

Groendus was created in March 2021 from the merger of six specialized companies active in, among other things, solar projects, smart metering services and sustainable energy solutions. The producer and supplier has a customer base of more than 4,000 companies, municipalities and institutions and has so far installed 170MW of solar capacity and 12,000 meters. It has already built more than 300 solar power stations in the Netherlands and has the ambition to significantly expand this number, alongside its push for more sustainability solutions, such as smart charging and battery storage.

Upon completion of the transaction, Groendus will be OMERS Infrastructure's fifth global investment in renewable energy sources, alongside Azure Power (India), FRV Australia, Leeward Renewable Energy (US) and Navisun (US). For APG, the investment builds on an extensive global energy transition portfolio, with investments in offshore wind farms for renewable energy, such as Merkur (Germany) and Walney 1Vasa Vind (UK, Sweden).

The investment in Groendus has helped boost SOI investment in renewables to an estimated US$6 billion so far this year – about a third the level achieved in 2021, when investments in the sector by SWFs and PPFs hit a record high of US$18 billion. Europe has come to the fore as a major target of investment, representing 25% of sovereign capital last year and a similar amount so far in 2022.

The APG-OMERS takeover is typical of the kind of partnerships SOIs forge in renewables infrastructure. Other examples are: Cubico Invest (OTPP, PSP), Arevon Energy (ADIA, APG, CalSTRS) and co-investments such as Greenko Energy (ADIA, GIC) and Generate Capital (AP2, AusSuper, QIC). These will be increasingly popular as the industry becomes hotter and sovereign investors seek to rely on external expertise to catch the green wave. 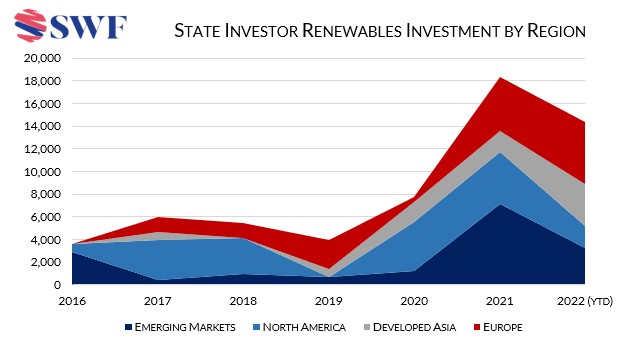