Dubai World is a global holding company and long-term investor that focuses on sectors that are strategic to the diversification of Dubai’s economy, including transport & logistics, drydocks & maritime, urban development, investment & financial services. It absorbed 100% of its main asset, DP World, after it listed for 13 years to avoid restrictions related to failed payments to creditors. Most of the other assets were absorbed by DP World itself, so the lines between both institutions have become increasingly blurry.

DP World is one of the world’s leading global supply chain businesses, focusing mainly on port terminal operations and cargo logistics. It works closely with other state-owned investors in strategic infrastructure. Over recent quarters, it has expanded its partnership with Canadian public pension fund, Caisse de dépôt et placement du Québec (CDPQ), in the UAE and the wider region. In June, CDPQ announced it will invest US$2.5 billion in the Jebel Ali Port, the Jebel Ali Free Zone and the National Industries Park through a new joint venture in which it will hold a stake of approximately 22%, with the remainder of the US$5 billion transaction being financed by debt. Other long-term investors will have the opportunity to acquire an additional stake of up to US$3 billion. The transaction implies a total enterprise value of approximately US$23 billion for the three assets. The three assets generated pro-forma 2021 revenue of US$1.9 billion.

Last year, DP World and CDPQ signed a long-term agreement with Indonesian conglomerate Maspion Group to start the construction of a US$1.2 billion container port and industrial logistics park in Gresik, nearby Surabaya in East Java. 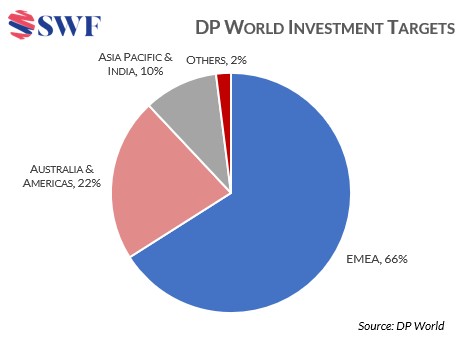 DP World also expanded its partnership with India’s quasi-sovereign wealth fund, the National Investment and Infrastructure Fund (NIIF), with an additional US$300 million to allow the company to accelerate investment across ports and logistics in India. DP World and NIIF have a joint venture, Hindustan Infralog Private Limited (HIPL), which was set up to invest up to US$3 billion in ports, logistics and related sectors. HIPL made its first investment in July 2018 with the acquisition of a 90% stake in Continental Warehousing Corporation (Nhava Seva). DP World is currently present at six locations in India with over 6 million TEU of gross capacity and also operates container trains connecting ports to the interior.

Additionally, it recently formed a new partnership with the UK’s development arm, British International Investment (BII) (formerly CDC Group), in Africa. Its initial focus on modernising and expanding three ports in Dakar (Senegal), Sokhna (Egypt) and Berbera (Somaliland). DP World is contributing its stakes in the three existing ports initially and expects to invest a further US$1 billion through the platform over the next several years, while BII is committing approximately US$320 million initially and expects to invest up to a further US$400 million. DP World has a presence in 10 African states, having bagged the management of the multipurpose terminal in Luanda in 2020, followed by a project in the port of Banana in the Democratic Republic of Congo.