Korea’s National Pension Service is smashing benchmarks with solid returns, but is set to face a challenge in its efforts to hike allocations to alternatives from 10% to 15% by 2025.

In its latest financial report for H121, the NPS has maintained its position as the world’s third biggest public pension fund with AUM of KRW908 trillion (US$778 billion) and notching up a 7.5% return over the six-month period and 7.9% on an annualized basis. Gains in public equities have helped the fund post a KRW74.5 trillion return in the period, beating projections of a year-end total of more than KRW850 trillion. Global stocks returned 17.7% while domestic stocks posted 15.6%, easily beating their benchmarks. In fixed income, foreign bonds saw a 2.3% return, assisted by a weaker won, while domestic bonds yielded -1.2%. Meanwhile, returns on alternatives were a shade below 5.0%.

In a bid to squeeze more yield in its portfolio, NPS is looking to increase its in-house management of fixed income, while reducing the asset class’ weight in the portfolio from 46.1% at end-June to 35.0% by 2025.

Overseeing this shift is Ahn Hyo-joon, who was reappointed CIO for a further year until October 2022, having been appointed to the position on a two-year contract in October 2018. Ahn is already NPS’s longest serving CIO. The move will ensure a modicum of stability and consistency as the fund drives forward its long-term strategy, although longer terms would provide greater incentive to encourage any CIO to lengthen their investment horizons. 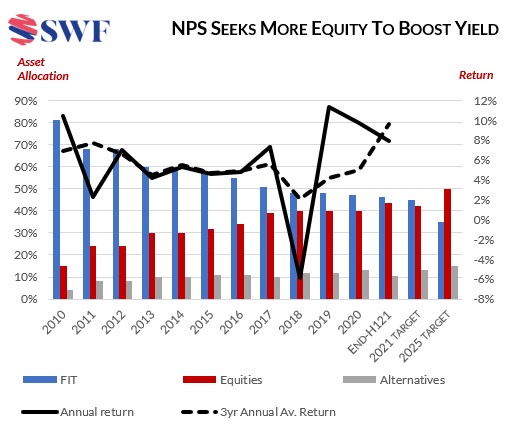 So far, NPS’s targets in alternatives have not been realized as public equity asset values have soared at a faster rate than the fund can allocate to private markets. It would have to shift more than KRW22 trillion (US$20 billion) from fixed income and public equity into alternatives to meet its short-term targets.

This year has seen NPS acquire a major stake in the UK private equity fund BC Partners and allocated US$887 million to co-investments with the fund. The move will help boost NPS’s global deal-sourcing capabilities. In the real estate space, it has recently formed joint investment partnerships with Hines and Stockbridge across a wide range of sectors. Life science offices and logistics properties are also part of its growing real estate exposure via funds managed by Blackstone and GLP. Such relationships can enable a fund to develop insight and skills.

Although its current US$78 billion alternatives portfolio is hefty, there is a bias towards large real assets in real estate and infrastructure as well as allocations to externally managed funds, while venture capital activity is sparse. Asset prices in private markets – particularly in startups – have ballooned, raising fears that a bubble may burst at some point and over-valued assets will flop. Regulatory risk has, for instance, hit some Chinese tech sectors and without sufficient hedging could hamper hopes of higher returns. Understanding price risks when assessing opportunities will be crucial to ensure NPS backs winners if it is to conduct more of its own deal origination.

The learning journey for the Korean pension fund could be longer than anticipated and this casts questions over the desirability of pumping billions into private equity just to chase a target, especially in a fevered market. NPS will not meet its alternatives targets through its current capacities but instead will continue to rely on co-investment partners and external managers. The NPS has deployed more than KRW60 trillion worth of overseas alternative investments to 160 asset managers. It is likely those relationships will not diminish any time soon.