Indonesia’s plans to encourage FDI in startups through liberalization measures coupled with its new SWF acting as a lightning rod for capital will spur sovereign investor interest in a large swathe of an economy that offers stable growth and huge potential.

A draft presidential regulation attached to the Omnibus Law on Job Creation looks to overhaul legislation, removing the minimum investment threshold of IDR10 billion (US$0.7 million) on FDI in startups established in the country’s 15 special economic zones. Except for a few sectors, all of Indonesia’s industries are being opened up to 100% foreign investment.

Government chiefs hope the moves will spark the creation of tech unicorns in a frontier market where the consumer market is ripe for growth led by rising popularity of smart phones, the accelerating trend towards cloud models for software and infrastructure services and the development of e-commerce. According to a report by Google, Temasek and Bain, Indonesia’s digital economy today is the biggest in the region, worth US$44 billion.

Added to the liberalization of FDI regulations is drive to generate investment partners through the establishment of the Indonesia Investment Authority (INA), which has distinct parallels with India’s National Investment and Infrastructure Fund (NIIF). Seeded with US$5 billion of cash and shares in state companies, the NIA aims to offer foreign and local investors opportunities to deploy capital into sub-funds spanning infrastructure, healthcare, tourism, technology and the development of the new capital city.

President Joko Widodo is hoping the SWF will mobilize US$100 billion of capital, making it a focal point for the country's next stage of development as it addresses infrastructural shortcomings: poor road quality, an underdeveloped retail infrastructure, electricity shortages and a telecoms infrastructure that is of lower quality than in most other Southeast Asian markets.

The first tranche of the new sovereign wealth fund closed at around US$15 billion with pledges from U.S. International Development Finance Corporation, Japan Bank for International Cooperation, Caisse de dépôt et placement du Québec (CDPQ) and APG Asset Management. This does not seem to be enough though, and Jakarta may be also in talks with Abu Dhabi Investment Authority (ADIA), Public Investment Fund (PIF) and others in a bid to ramp up further investment. 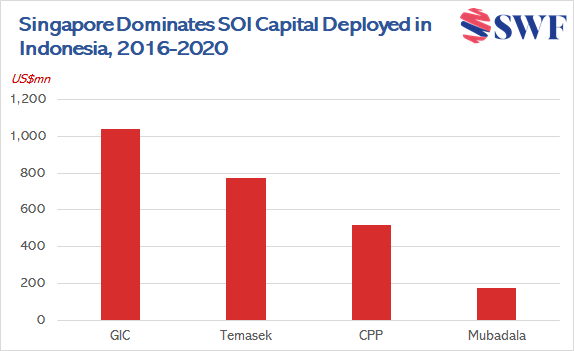 So far, state-owned investors have only stepped their toe into the Indonesian market, yet their venture capital is set to yield attractive dividends. SOIs deployed US$2.5 billion since the beginning of 2016 with Singaporean investors GIC and Temasek representing the lion’s share, according to Global SWF data. These investments have been oriented towards retail and the digital economy and could point the way ahead for further growth in SOI capital amid the FDI rules changes.

GIC sought to gain exposure to the surging consumer market from 2016 when it snapped up a significant minority stake in Trans Retail, Indonesia’s operator of Carrefour stores, for around US$390 million. Having rolled out hundreds of new stores, the store operator had planned to launch an IPO in 2020 but the pandemic appears to have stalled the process.

As Global SWF reported earlier this month, Temasek is set to make big gains if the merger of Indonesia's ride-hailing and payments firm Gojek and e-commerce leader Tokopedia is approved. Temasek has invested heavily in both firms since 2018 and would be a significant shareholder in a combined entity. A proposed dual listing in Jarkata and New York, with a target value of US$18 billion, would represent a stellar yield for the Singaporean state-owned investor.

GIC is also set for gains from a planned offering by Traveloka, having led a US$420 million funding round in April 2019. The pandemic hit the travel operator app, leading to a 17% drop in its value to US$2.75 billion at the July 2020 funding round. Reporting 60 million downloads, the eight-year old startup also plans to go public and is exploring a merger with a SPAC with hopes of a valuation at US$5 billion to US$6 billion. If Traveloka meets expectations of turning a profit in 2021 after a tumultuous year for the travel industry, it will have proved to foreign investors that Indonesia can deliver yield even amid the most adverse circumstances.