CPP Spreads its Tentacles in Renewables, Boosting its Global Leadership in Clean Energy

Canada’s biggest public pension fund, CPP Investments, continues to maintain its position as a leading global investor in renewable energy with this week seeing it stump up a further US$225 million in Octopus Energy Group.

Octopus is one of the largest renewables investors in Europe, managing 3GW of energy projects. Its technology platform, Kraken, supports its own retail, generation and flexibility businesses and is licensed to other major energy players, including E.ON and EDF in the UK.

The latest investment in Octopus brings CPP’s total global investment in renewables so far this year to just over US$1.8 billion, according to Global SWF data. It represents around a quarter of total capital committed to the sector by sovereign wealth funds and public pension funds so far this year. The Octopus deal comes hot on the heels of CPP’s EUR800 million commitment last month to European renewables platform Renewable Power Capital (RPC), as it expands its presence in Sweden with the acquisition of a 528MW onshore wind cluster. In February, the Canadian fund bumped up its equity stake in India’s ReNew Energy Global Power, which possesses 7.3GW of solar and wind assets, to 26.2% after snapping up a 6.1% for US$139 million. Since 2013, CPP has invested US$9.1 billion in unlisted renewables infrastructure, making it the leading state-owned investor.

CPP CEO John Graham indicated that India is a key target of the fund’s renewables strategy in a visit to the country in February. Graham said its Sustainable Energy Group (SEG) possesses US$18 billion in assets with India a target market for investment as the portfolio aligns to Paris Agreement targets. Conscious of both rewards and risks of investment in India, CPP is seeking partnerships and investments in funds to enable it to share risk and intelligence with experienced market players and choose assets that best meet its risk/reward profile.

With approximately US$59 billion committed by SOIs over the past decade, the Canadian federal fund represents 15% of the total, ahead of Québecois fund CDPQ with 10% and Singapore’s GIC and the Netherlands’ APG with 8% each. Collectively, Canadian capital is a major force in global renewables development, contributing 43% of total SOI investment from 2013.

In terms of region, Europe has proven the most attractive market, taking a 31% share of SOI capital, ahead of North America (29%), Emerging Markets (27%) and Developed Asia (13%). Europe’s dominance is explained by the more proactive approach by governments to meeting Paris-aligned net zero targets and, latterly, the strategic need to ween the region off Russian gas imports through greater self-sufficiency in electricity generation. Also, European public pension funds, particularly APG and its Dutch stablemate PGGM, have tended to focus deal origination in their home region.

Last year, SOI investment in renewables assets hit an all-time high of over US$18 billion, while this year the level is at US$7.7 billion, making 2022 the second highest annual rate already with just over five months to go until the end of the year. While Emerging Markets were the main driver of investment in 2021, this year Australia has taken the lead, dominating the US$3.1 billion so far deployed in Developed Asia.

This year kicked off with a major investment by GIC in InterContinental Energy, which possesses a portfolio of 200GW of onshore wind and solar capacity in Western Australia, Oman and Saudi Arabia which will enable production of more than 14 million tons per annum (mtpa) of green hydrogen or 80mtpa of green ammonia. Australia is likely to feature strongly in renewables going forward as it is expected to gradually phase out coal-fired thermal electricity generation in favor of renewables, with wind and solar power leading growth. The country is hugely popular among Canadian funds, although GIC also commands a sizeable slice of investment. 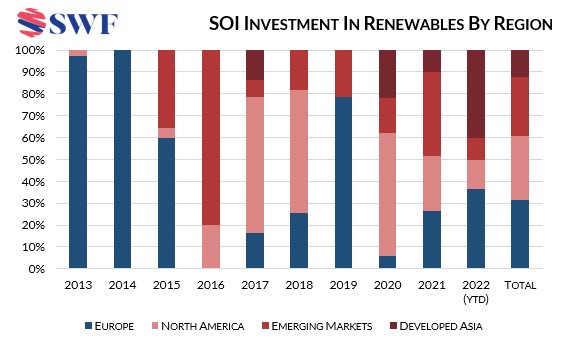