Canada’s biggest public pension fund, CPP Investments, this week appointed heads of the two most important regions outside of North America, Europe and Asia, to advance its objective of US$1 trillion of assets under management within a decade.

The fund handed German national Maximilian Biagosch the position of Europe Regional Head and Head of Direct Private Equity. Biagosch will continue in his role as head of private equity, to which he was promoted in August. He previously worked for seven years at Permira Advisers, focusing on private equity transactions, and was most recently responsible for the firm’s global capital markets activities. Prior to that, he was an investment banker for Deutsche Bank and BNP Paribas in London.

Tandiono will be leading efforts for future growth, as CPP Investments has identified Asia – which represented 24% of AUM in FY2021 – as a focus for its US$1 trillion target. The fund is examining opportunities in the region’s real estate and infrastructure markets as well as private equity acquisitions, which lies in Biagosch’s domain. As such, both men are likely to be working closely in the senior management team.

The new appointments mark the latest personnel shake-up. In October, Deborah Orida was appointed the organization's first Chief Sustainability Officer (CSO), but maintains her role as Senior Managing Director & Global Head of Real Assets. The Real Assets department that Orida leads has made significant investments that support the economy transition, including more than C$7 billion of renewables, 403 green buildings and decarbonization technologies and services.

In August, the Toronto-based fund announced two new appointments to its board of directors, including former Sun Life CEO Dean Connor and former Fortis CEO Barry Perry. Connor has decades of experience in the financial services sector and should lend his professional strength to CPP’s investments in the finance and insurance sector, such as its ownership of Ascot Group and BGL Group. Perry has long-standing involvement in the utilities and oil refining sectors, where the fund has a high level of exposure. Aside from board level appointments, CPP has made new appointments at management level. They include Korean national Suyi Kim who has been promoted from head of Asia-Pacific to global head of its US$100 billion private equity portfolio. 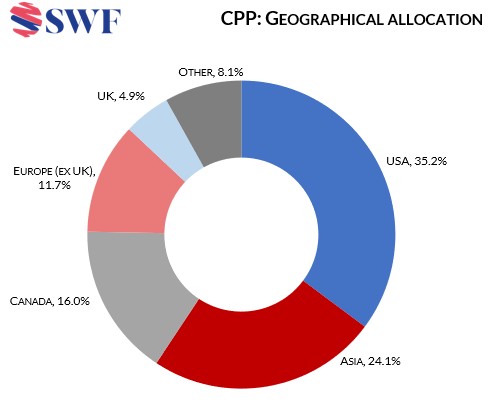 Asia in its Sights: India is the Bullseye

CPP is upping its game in its ambitions for the 2030s. While it reported a net return of 20.4% for the fiscal year ending March 31, it underperformed its benchmark portfolio, which returned 30.4%. With foreign exchange losses of C$35.5 billion, it reported a single-year net dollar value-added of negative C$35.2 billion, after deducting all costs.

In Q2 of the current financial year, CPP Investments reported a 3.8% return and notched up its best long-term return in its 22-year history. The annualized net return for the past decade was 11.6%, enabling the Canadian public pension fund to close the quarter at end-September with assets under management totalling C$541.5 billion (US$425 billion) – comfortably exceeding its FY2022 target. An increase of C$21.9 billion within just one quarter was 90% comprised of net income with the remainder in contributions; for the whole first half, the fund increase in value by C$44.3 billion and delivered a net return of 7.5%.

The signs were that alternatives lifted its performance. In Q2, it devoted nearly US$1.6 billion to private equity funds with a growth equity focus – Asia again made up a sizeable portion of this exposure, representing at least 60% of the fund allocations. CPP also made its own direct investments in venture capital rounds.

Logistics real estate has come to the fore in the public pension fund’s Asia strategy. In January, it made  shown a US$200 million commitment to a US$1 billion logistics real estate joint venture in Indonesia and is working with LOGOS to "develop a diversified portfolio of facilities targeted at third party logistics (3PL), data centre and industrial tenants."

In India, it has taken a different tack, signing an office venture with Indian property developer RMZ in April. The deal targets a portfolio of US$1 billion of office property in Chennai and Hyderabad. Last month, it entered into a new joint venture with Indian mall developer Phoenix Mills – one of its closest real estate partners – to co-develop an office-led, mixed-use asset.

Roads are also a favorite. Last month, CPP snapped up 25% of the units in National Highways Infra Trust, an infrastructure investment trust (InvIT) sponsored by the National Highways Authority of India (NHAI), for more than US$200 million. In August, CPP announced it was increasing its stake in IndInfravit, a road concession portfolio, from 27.9% to 43.8% at a cost of more than US$140 million. Earlier this year, it was one of the top anchor investors in PowerGrid Infrastructure Investment Trust (InvIT) public issue, committing nearly US$109 million. CPP also invested US$210 million in a joint venture with RMZ, one of the largest privately owned real estate developers in India, to develop and hold commercial office space in Chennai and Hyderabad. 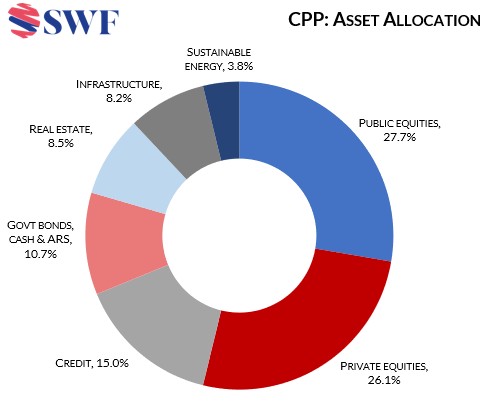