Today is International Women’s Day and, once again, we have studied in detail the female representation at State-Owned Investors, including SWFs and PPFs. Diversity and inclusion are becoming key parameters in ESG reporting, and funds are putting a lot of effort in recruiting and retaining people of all genders, races and backgrounds. We observe large disparities in the composition of the workforce of the world’s major SOIs – at three different levels: 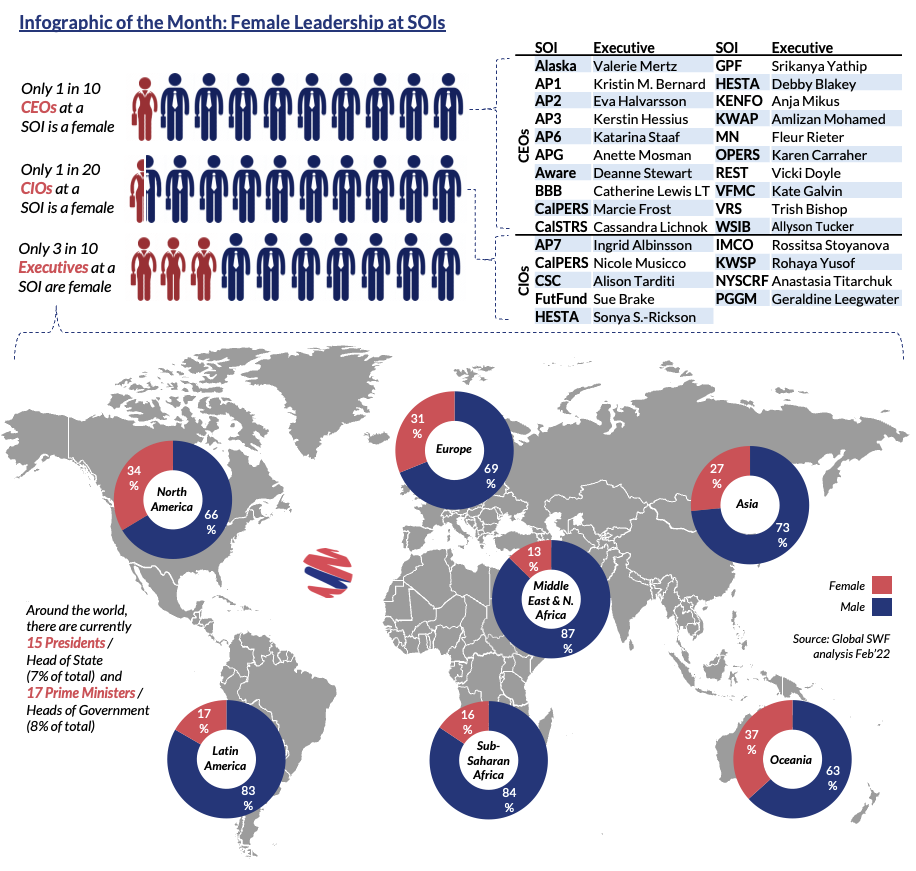 The CEO position and, especially, the CIO title, seem to be the most difficult to attain among women. As confirmed by CDPQ’s female CFOO in a profile last year, the biggest challenge of female leadership has often been on the investment side. Only nine of the world’s major SOIs at have a female overall CIO, including CalPERS’ new executive.

Three female CIOs are in Australia, which continues to be at the forefront of the industry in terms of best practices and performance. Sue Brake of the Future Fund is featured in our 2022 annual report; HESTA has a chairwomen and female CEO and CIO; and CSC’s Alison Tarditi has been in the post for over 15 years. Federal fund AustralianSuper has one of the highest reported overall numbers with 49% of its workforce being women.

On the other side, the Middle Eastern funds continue to present, by far, the lowest numbers when it comes to female representation and equality: only 7% of their board members and 13% of their executives are women. Three of the largest and most known funds – ADIA, QIA and Mubadala – do not have female representation at their boards or executive teams.

Is it getting any better?

Having undertaken a similar exercise last year, we can compare results and assess progress. Overall, we see a slight improvement in the numbers, both at board level and at executive level. Of the female CEOs we listed last year, three of them are no longer in their posts: Temasek’s Ho Ching retired to be replaced by a man; VFMC’s Lisa Gray passed the baton to Kate Galvin; and Alaska’s Angela Rodell was replaced by Valerie Mertz.

Given the increasing stress on ESG reporting, and the cultural changes happening in most of the countries that host Sovereign capital, we expect – and hope – for a steady rise in the numbers of female leaders in coming years.