CDPQ Beats All Benchmarks, Delivering Best Return in More than a Decade

The Caisse de dépôt et placement du Québec (CDPQ) has reported its best returns in more than a decade with a record C$78 billion (US$61 billion) of total asset growth to C$420 billion (US$328 billion).

The weighted-average return on its depositors’ funds was 13.5% in 2021, compared with 10.7% for the benchmark portfolio, representing C$10.4 billion in value added. The annualized returns over five and ten years were 8.9% and 9.6%, respectively, also outperforming the benchmark portfolio. CDPQ also compares favorably with Canadian peers with only CPP reporting a stronger growth rate at 9.7%.

Real assets and private equity are regarded as the public pension fund’s long-term yield-generator. Maarika Paul, CDPQ’s Chief Finance and Operations Officer, told Global SWF last year: “Infrastructure is going to be the portfolio where we will see the largest growth in the next 3-4 years. We also expect our rates and credit portfolios to ramp up including RE debt. Private Equity and Real Estate are probably at the level we want them to be at the moment, with the pandemic accelerating the implementation of Ivanhoé Cambridge’s action plan including a reduction in commercial shopping centres and an increase in industrial and logistics properties.”

A unique aspect of the fund’s strategy is its investment in its home state, with its Quebec assets growing by C$10 billion to C$78 billion in 2021. CDPQ is acting more as a strategic investor by supporting the globalization of Quebecois businesses, the development of the digital economy, and advancing the sustainability agenda in the state.

Going forward, the fund has significant ambitions on the climate change front and has set out four areas of action:

However, it is also facing considerable short-term challenges. CDPQ CEO Charles Emond said: “The conditions we face—including pandemic-induced imbalances, rising interest rates and growing inflation—significantly increase the complexity of the business environment for 2022. Very disciplined execution of our strategy, rigorous investment selection and sound diversification will be essential to continue performing well in the coming years.”

The Quebecois public pension fund has also divested from Russia, in response to the crisis in Ukraine. CDPQ announced this week that it had stock positions worth hundreds of millions of dollars in seven listed Russian banks and energy companies. Canada had already designated the companies in its Special Economic Measures (Russia) Regulations, developed in 2015 after Russia’s invasion of the Crimea in Ukraine. The regulations prohibited dealing with individuals and companies on the list, and banned debt or equity financing. However, CDPQ was allowed to continue to hold stakes in the companies it owned before they were added to the list. With total stockholdings in the companies worth less than US$400 million, they represented around 0.1% of the fund’s total portfolio. 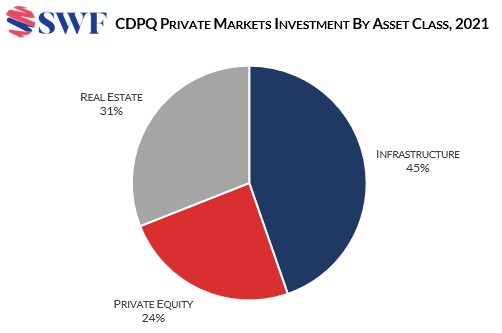