The approval of the A$5.2 billion (US$3.7 billion) takeover of Spark Infrastructure by a consortium of private equity giant Kohlberg Kravis Roberts (KKR), the Ontario Teachers’ Pension Plan (OTPP) and PSP Investments marks the latest acquisition involving Canadian public pension funds, who have emerged as the leading foreign investors in Australian infrastructure.

Australia’s Foreign Investment Review Board this week gave its approval of the deal, which is set to be closed by the December 22. The company will delist from the Australian Securities Exchange (ASX) on Monday, November 29 – a week after shareholders overwhelmingly agreed a “creditor scheme resolution” for takeover.

Spark had initially spurned an offer for A$4.9 billion, but the offer was sweetened to around 12% above its share price value. Spark possesses A$17 billion of electricity network assets, including a 15% stake in Transgrid, Boman Solar Farm (100MW in operation and a 2.2GW development portfolio), 49% of South Australian electricity distributor SA Power Networks and 49% of Victoria distributors Citipower and Powercor

Global SWF data reveals that state-owned investors have ploughed US$11.7 billion into Australian utility companies over the past 10 years, mostly in the electricity generation and transmission sector. 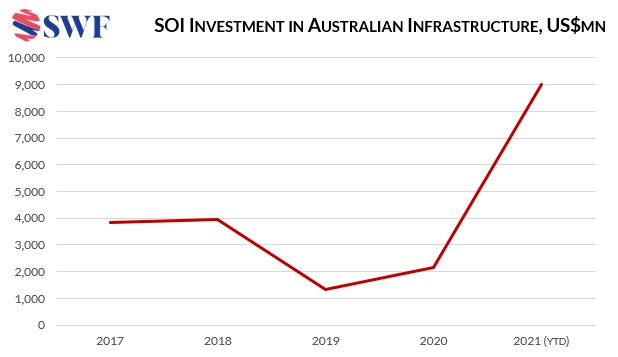 Australian funds are dominant in SOI investment in their nation’s infrastructure. Combined investment representing a third of the total capital deployed from 2017. AustralianSuper leads with 12% of capital deployed over the period, followed by TCorp (11%), Future Fund (5%) and QIC (1%). But Canadian PPFs are also big investors in Australian infra with a combined 46% share over the period. Leading Canadian investors include CPP (12%), CDPQ (8) and OMERS (7%) with BCI, PSP and OTPP each contributing 6%.

Australia's energy and utilities infrastructure network is mature, but there are opportunities for growth, particularly in the fast-growing renewable energy segment. The country is expected to gradually phase out coal-fired thermal electricity generation in favor of renewables, with wind and solar power leading growth. Improvements in transmission and distribution infrastructure and battery storage capacity will also feature prominently in the infrastructure growth story. The pressure is on to improve electricity grid infrastructure to support the rise of electric vehicles, among other new electricity demands from households