Two of Canada’s biggest public pension funds have ramped up their investments in the Indian road network, contributing a total of US$816 million to a US$1.2 billion deal to acquire assets from Brookfield.

CPP Investments and OMERS are supporting Indinfravit Trust, an infrastructure investment trust, take over the toll roads. The deal values the equity of the five operational road assets that Brookfield owns through platform Peak Infrastructure at around INR60 billion, alone with INR30-32 billion of debt. The portfolio comprises three toll roads and two annuity roads, with approximately 2,400km in the states of Andhra Pradesh, Bihar, Maharashtra and Uttar Pradesh. The roads portfolio has been operational for about nine years and residual concession period of 20 years on average, according to ET. 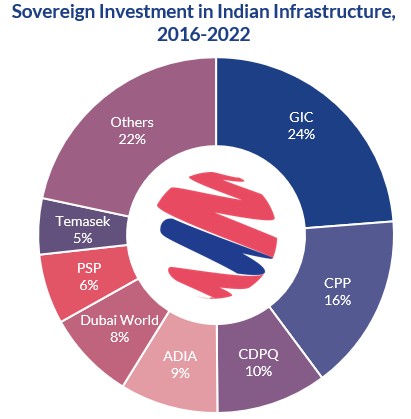 Canadian PPFs became cautious of the risks in the Indian road and transport sector during the pandemic. Canadian PPFs temporarily paused their investments in May 2020. CPP suspended its US$190 million investment in an infrastructure arm of Mumbai-based logistics firm JM Baxi, and CDPQ halted the purchase of the US$325 million Highway Concessions One portfolio from GIP, its first acquisition of roads in India. The two funds had previously been among the biggest investors in the country’s public and private equity markets. However, interest is now returning in Indian roads, even though the country is gripped by inflationary forces and enduring a lower growth trajectory.

There are many factors counting in favor of sovereign fund investment in infrastructure at a time of both heightened risk and energy transition. Infrastructure is a tangible asset which retains a residual value, making it attractive at a time of economic distress. At the same time, it provides a long-term predictable cashflow that chimes with the inter-generational horizon of state-owned investors. Regulated assets like toll roads and utilities usually involve inflation-indexed increases in charges, which ensures a hedge against inflation – a particularly important factor at a time of heightened global inflationary pressures. Infrastructure also allows state-owned investors an opportunity to add value to assets and expand portfolios, as IndInfravit is doing. Unlike venture capital, infrastructure has a high barrier of entry that prevents competitors, giving toll road operators a monopolistic position in the market.

India is particularly attractive due to its large population and growth potential. Infrastructure is the main Indian sectoral target of interest among state-owned investors. India is set to be the main driver of road infrastructure investment in Asia over the medium-term, with the country home to both the highest number of projects in the region with 633 projects.

A US$270 billion plus pipeline of projects reflects the government’s aim to modernise Indian highways and upgrade the quality of roads as part of the country’s National Infrastructure Pipeline (NIP). The NIP aims to support growth of India’s infrastructure sector with total investment of US$1.4 trillion and is bolstered by liberalization of FDI regulations and highway privatization.

A notable development is the government’s pro-active approach to attracting sovereign investment, via the National Investment and Infrastructure Fund (NIIF). ADIA, AustralianSuper, CPP, OTPP, PSP and Temasek, as well as USA’s IDFC, the government of India and four Indian leading institutions, have contributed to the NIIF’s US$2.34 billion Master Fund, while also pledging to co-invest with the Indian quasi-SWF.