Canadian Peers Should Learn a Lesson from Ontario Teachers

The fund’s return of 11.1% was 2.3 percentage points above its benchmark, bringing its six-year average to 7.7%. As a result, OTPP remains fully funded, like all its Canadian peers am dots annualized total fund net return is 9.7% since inception in 1990.

Ziad Hindo, Chief Investment Officer, put the performance down to portfolio diversification with strong returns in alternatives, “particularly in private equity, infrastructure, inflation sensitive assets and the Teachers’ Innovation Platform [a venture capital program].” In public equity, OTPP trailed its benchmark by 4.1 percentage points with a 9.0% return. Fixed income proved to have a negative impact with a return of -6.3%, which can largely be explained by the impact of low policy rates and the appreciation of the Canadian dollar. While infrastructure helped boost returns, OTPP’s real estate portfolio delivered a relatively meagre 2.5% yield – well below the benchmark return of 8.8% - that may not have been helped by the fund’s large exposure to retail.

Global SWF research finds that OTPP’s alternatives allocation is the highest rate of all Canadian PPFs, alongside its provincial stablemate OMERS, at 52% of AUM. Yet, both funds were outclassed in returns by funds with lower alternatives allocations. While OTPP’s annual performance was impressive, in terms of six-year averages it still lagged behind the averages of CPP (9.7%), Québec’s CDPQ (8.7%) and Ontario’s OPTrust (8.6%) and OMERS (8.0%) – although, CPP’s return is for the financial year ending 31 March 2021. OTPP’s return was also on a par with other public pension funds who have so far revealed their 2021 performance, namely PSP and British Columbia’s BCI.

There is no neat correlation between private markets allocations and annual returns. Alberta’s multi-fund manager AIMCO and Ontario’s healthcare sector PPF HOOPP both reported private market allocations of 28% of AUM in 2020 but had markedly different average returns for the six years to end-2020. AIMCO’s average was 6.6%, while HOOPP notched up 10.3% - the highest rate for all the nation’s PPFs. In terms of performance relative to benchmarks, AIMCO was 5.5% below its benchmark while HOOPP overperformed by 1.6%. 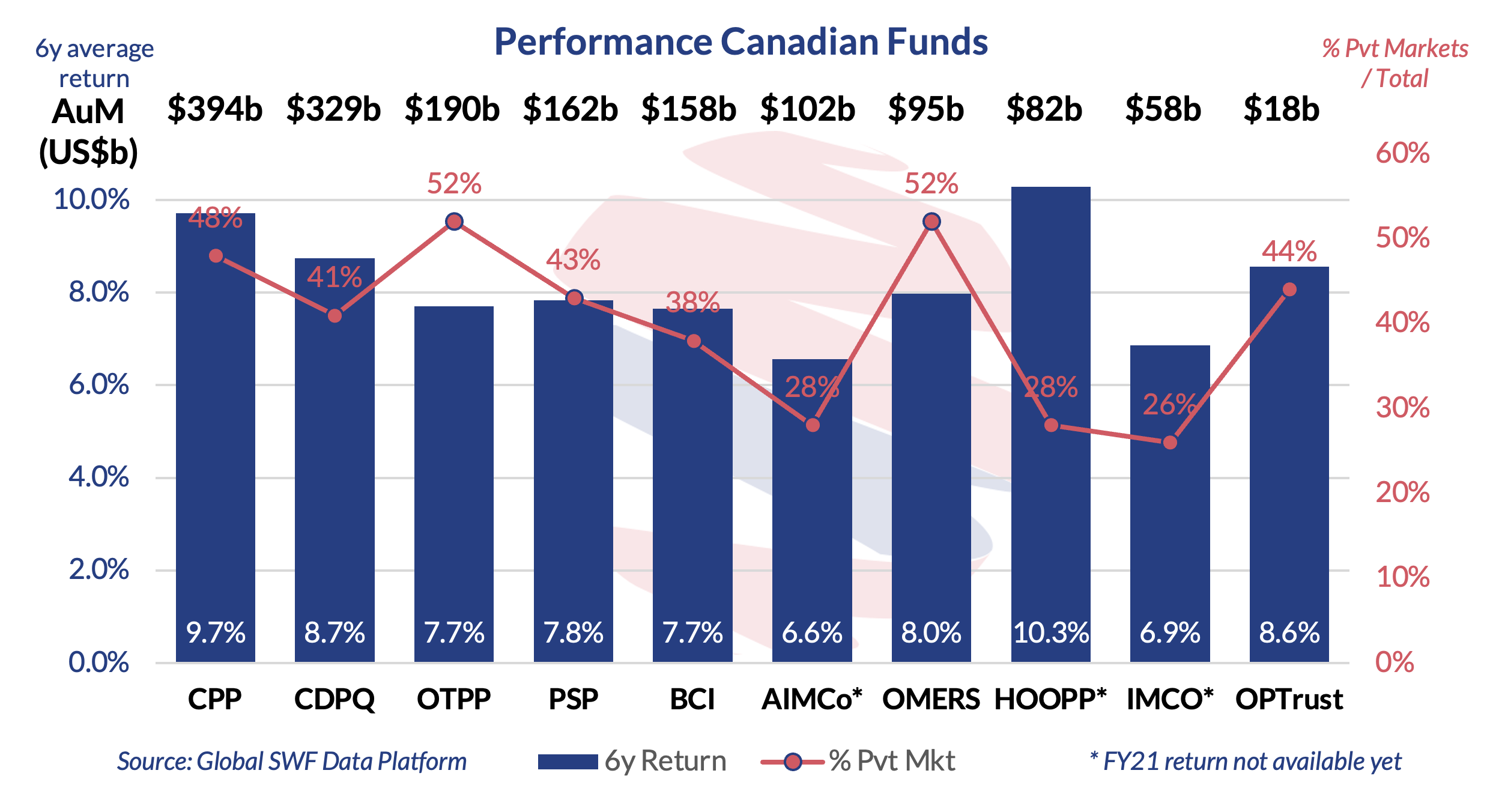 Ontario Funds Compared: OTPP has the Edge Over OMERS

On face value, there appears to be an enormous disparity in performance against benchmarks. OMERS and OTPP have identical private market allocation, both invest most of their portfolio abroad, and both adopt the calendar year as the basis of their fiscal year. Yet, the two Ontario funds’ outperformance of their benchmarks is radically different, with OMERS at 9.1% and OTPP at 2.3%. But OTPP is still the better performer.

Annual returns are only a small part of the story. For PPFs, the central focus is delivering solid risk-adjusted returns over the long-term to ensure they are fully funded, no matter the prevailing economic conditions.

While OMERS appeared to smash its benchmark in 2021, it came after a dismal performance in 2020 when it delivered an annual return of -2.7% - well short of its positive 6.9% benchmark return – due to the impact of plunging real estate values amid the pandemic.

In contrast, OTPP’s return of 8.6% in 2020 was just 2.1% off its benchmark. OTPP’s performance is also more robust over the long-term. In terms of annualized 10-year returns, OTPP has reported 9.3% while OMERS is 8.0%. This has a significant impact on funding ratios with OTPP at 107% and OMERS at 97% - a full 10 percentage points in difference. As such, it is clear which of the two funds is demonstrating the better performance and best able to cover future liabilities.

The difference in performance is not simply reflective of asset management capabilities and the efficacy of their strategies, but more importantly the significant difference within alternatives, which cover private equity, venture capital, real estate and infrastructure – and, in turn, the exposures within these asset classes.

OTPP has a higher allocation to private equity than OMERS, while OMERS is the bigger spender in real estate. These two asset classes have shown very different movements, particularly during the pandemic when institutional investors piled into private equity while some real estate segments such as shopping centers and offices took a major hammering as people stayed at home. OTPP is also more diverse in its global market exposure with higher allocations to Europe and Emerging Markets, thereby spreading risk across a broader geography. 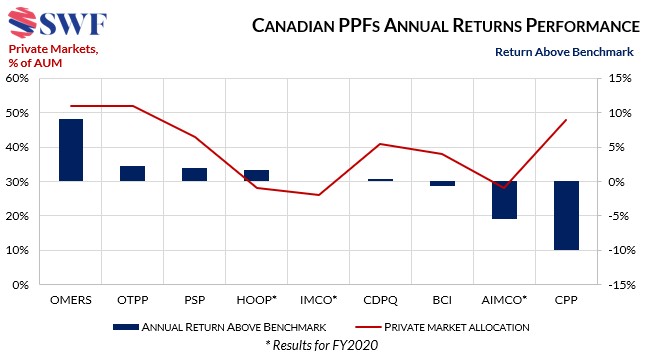