Canadian public pension funds CPP Investments and Ontario’s OMERS have cashed in their investment in Skyway Concession Company (SCC) at twice the value they invested, supporting the idea that infrastructure is a hedge against volatility in more liquid assets, such as public equities.

This week, CPP and OMERS Infrastructure announced they agreed to terms with Atlas Arteria to sell each of their respective 33.33% indirect stakes in SCC, which operates the Chicago Skyway toll road under a 99-year concession agreement. The quoted value indicates the two partners have doubled their money with a total consideration of their combined stakes of around US$2 billion.

The two public pension funds were part of a consortium that also included the Ontario Teachers’ Pension Plan (OTPP), which struck a deal in November 2015 to acquire SCC. Chicago Skyway is a 12.5km toll road that forms a critical link between downtown Chicago and its south-eastern suburbs. At the time, the three equal partners contributed an equity investment of approximately US$512 million each.

Infrastructure has been a key component of Canadian public pension fund strategies, and are broadly seen as a low-risk, inflation-proof and stable hedge against volatility in public equity markets. In the year to date, Canada Inc has invested more than US$17 billion in infrastructure globally, which puts it on course to achieve the US$23 billion level invested last year.

The sale of stakes in SCC is part of a strategic tilt away from the US towards Europe, India and Australia, as the Canadian funds seek to diversify their infrastructure exposure. In the year-to-date, the US represents just 6% of Canadian fund allocations to infrastructure. 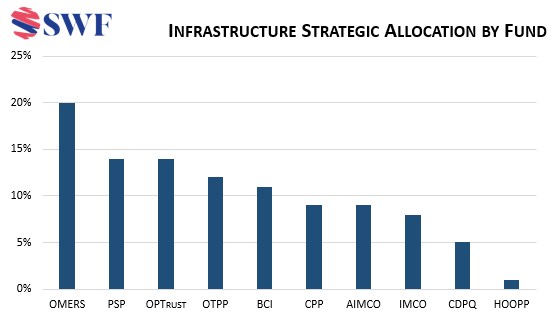 Canada Inc is a weighty force in global markets with combined AUM of US$1.6 trillion, of which more than 12% is devoted to infrastructure alone. Allocations to infrastructure vary across the funds, ranging from 1% for Healthcare of Ontario Pension Plan (HOOPP) to 20% for OMERS. Canadian infrastructure holdings are approximately US$185 billion with plans by some to ramp up their investments in utilities, roads, renewables, transportation and pipelines, potentially pumping tens of billions more into global infrastructure in coming years.

The domestic market represents 11% of total infrastructure investment by the funds – the same proportion as Australia. Bigger targets are the USA (17%) and the UK (13%). Notable emerging market targets are India (5%), Brazil (4%) and Chile (3%). The approach to the various markets differs, largely determined by available opportunities.

Canadian interest in the UK has, however, waned although funds retain significant stakes in strategic assets such as water utilities and airports – with the funds often co-investing, demonstrating a strategic convergence similar to their Australian targets. Last month, Canadian funds indicated they were looking to plunge billions into Germany's infrastructure following a meeting with German chancellor Olaf Scholz. IPE reported that CDPQ, OTPP, CPP and OMERS were examining infrastructure and healthcare sectors.

In terms of toll roads, Canadian funds have recently favored India, with CPP and OMERS alongside German insurer Allianz buying equity in a portfolio of Indian road assets from Brookfield via their IndInfravit Trust in June. In April, OTPP agreed to invest up to US$175 million in KKR’s road platform in India, which includes Highway Concessions One. Altogether, Canadian funds have invested US$3.5 billion in Indian infrastructure so far this year.

The biggest single commitment so far this year involved CDPQ’s deepening relationship with Dubai World – a state holding company – with the fund buying up a 22% stake in a range of infrastructure assets in the Emirate in June. The Québecois fund committed US$5 billion in investment in three assets owned by DP World, a subsidiary of Dubai World which is a long-term investor that focuses on sectors that are strategic to the diversification of Dubai’s economy, including US$2.5 billion in the Jebel Ali Port, the Jebel Ali Free Zone (JAFZA) and the National Industries Park.

The funds’ recent infrastructure drive in Australia saw CPP, CDPQ, OMERS and OTPP each invested over US$ 2 billion in 2021. In the year-to-date, the Canadian funds have invested US$4.7 billion in Australian infrastructure, representing nearly 28% of their global investments in the asset class.