CalPERS Passes Half a Trillion Mark, But is Still Short of a CIO

The US’s biggest public pension fund, the California Public Employees’ Retirement System (CalPERS), reported that its market value edged past half a trillion dollars for the first time.

A bull market has boosted the fund’s AUM to US$501.6 billion, 50% of which is allocated to public equities – a US$100 billion leap since January 2020, before the Covid-19 pandemic took hold, and just under US$30 billion more than at end-June. Yet, the fund is more than US$120 billion short of its needs, and it still lacks a CIO.

CalPERS’s funded status is 82% based on a 7% assumed rate of return (the average achieved over the past decade), and 80% based on the new 6.8% assumed rate of return under its risk mitigation policy. Due to expensive long-term care policies, the fund has warned that it needs to raise premiums to ensure their solvency with plans for rate increases that will raise premium costs by 90%. But the new CIO will be under pressure to improve performance.

Earlier this month, CalPERS held a second round of interviews for the CIO position, which has remained vacant for more than a year after Ben Meng resigned amid allegations of conflicts of interest. The names of interviewees have not been made public and a final decision is expected in coming weeks, with the new CIO in place by March 2022 – although they will likely be operating to Meng’s allocation bands and targets.

In March, the fund stated in a press release that the pandemic had significantly undermined its search efforts. It has now hired an executive search firm, Dore Partnership, to assist with recruitment.

The new CIO will be leading the investment strategy of a fund that has been compared to a mega cruise ship, lacking agility in changing course. A low interest rate environment has made fixed income unattractive (CalPERS returned -0.1% in this asset class in FY2020/21), while the torrid pace of growth in listed assets will not be sustained. The Californian fund will have to look

CalPERS is the US’s largest institutional investor at state level, managing the retirement savings or nearly two million Californian public employees. It is a highly activist fund, that has made the news for dropping the hedge fund program altogether or creating a new private equity model with less external dependency and fees. It is one of the largest private equity investors with US$38.9 billion of investments. 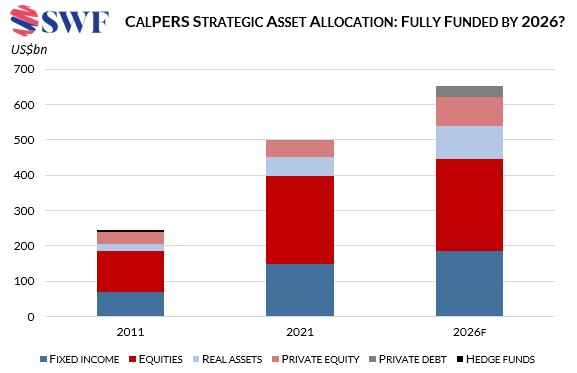 CalPERS is aiming to follow other PPFs in boosting allocations to private equities, which produced a 43.8% return in FY2020/21 – well above 36.3% for public equities. It hopes to achieve the double-digit growth it needs to meet its obligations to policyholders, by raising asset allocation to private equities from 9.2% to 13% by 2026. The strategic move would require at least US$46 billion of fresh commitments to the asset class, entailing a massive step up in a saturated market with high risks. The new strategy, agreed last month, also allows the fund to leverage up to 5% to increase diversification.

CalPERS is likely to sell its liquid assets to achieve its allocation targets, but ultimately fixed income and public equities will still need to grow in nominal terms if the fund is planning to be fully funded by 2026.

With private and public equity assets widely regarded as over-valued, it is likely to take far longer to meet the ambition to become fully funded – and banking on the out-performance of private equity and private debt markets is a big gamble.