Brazil: the Next Big Destination for State-Owned Investors

Infrastructure is dominant in the Brazilian portfolios of state-owned investors (SOIs), but there are tentative signs that they are seeking to diversify portfolios that are heavily oriented towards the Latin American country’s oil and gas industry.

Latin America’s biggest economy has lagged behind other large emerging markets, such as China and India, in relation to SOI investment in venture capital, with a heavy orientation towards the oil and gas sector, which is increasingly unattractive to ESG-sensitive investors.

In the year-to-date, we see signs of a shift in priorities in Brazilian portfolios. A lull in investment during 2020, when Brazil was heavily hit by the Covid-19 pandemic, has been followed by a surge in interest with Global SWF data showing US$3.3 billion of SOI investment in the year-to-date. One of the main areas of interest is the Technology, Media and Telecommunications sector and this year SOIs have begun to hunt for Brazilian unicorns - albeit rather late in the game. 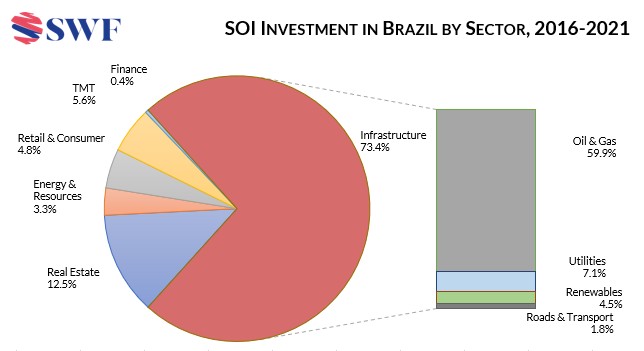 Global SWF analysis finds that sovereign wealth funds and public pension funds have invested more than US$15 billion in Brazil from 2016 to date with real assets comprising nearly 86% of the total SOI investment in Brazil. Around 73% of the SOI investment is in infrastructure assets while real estate is the second most favored sector, representing 12.5% of capital deployed.

In the real estate sector, trends point to increasing interest in logistics, following a global trend that has been stimulated by changes in distribution networks in response to a rise in e-commerce and home delivery.

This week saw ADIA and CPP back one of the largest ever logistics-focused funds in Latin America, GLP Brazil Development Partners II with BRL2.63 billion (US$530 million) of total equity commitments. GLP BDP II is expected to reach BRL 5.2 billion (US$1.1 billion) when fully leveraged and invested, focusing on the development of nine Class-A logistics parks in São Paulo, including a completed project that is leased an e-commerce company.

"We expect the GLP BDP II developments to meet an existing market need for high-quality, well-located assets, and to perform well over the long term as demand for logistics facilities and same-day delivery continues to grow. We have a strong conviction in the sector globally, and in GLP's ability to execute on behalf of the partners in Brazil."

In terms of sub-sectors within infrastructure, oil and gas sector dominates with chunky investments in midstream and downstream assets, notably the Nova Transportadora do Sudeste (BCI, CIC and GIC) and the Transportadora Associada de Gás (CDPQ) pipelines and the RLAM refinery (Mubadala). Opportunities to invest in oil and gas infrastructure are also likely to dry up as there is only a limited number of oil and gas assets. Other areas of interest are water and sanitation utility companies, renewables and roads, which represent 7.1%, 4.5% and 1.8% of investment since 2016, respectively.

With SOIs increasingly sensitive about the carbon intensity of their portfolios, such investments are likely to fall out of favor. The biggest SOI investors in Brazil are Canadian PPFs, which together represent 58% of total SOI investment from 2016. CDPQ alone represents nearly 28% of the capital deployed. The Maple 8 are taking a lead in backing energy transition, aligning with the Paris agreement on climate change. SOIs are now looking to Brazilian growth in start-ups to diversify their portfolios, advance ESG agendas and gain exposure to the country's tech leap.

Aside from Mubadala’s acquisition of the RLAM refinery made up around half the total, there was a noticeable pivot towards venture capital with GIC taking the lead. Latin American VC surged in recent years with Brazil leading the way and fintech a major target of investment.

International investors are reducing the scarcity of local growth capital in Brazil and are looking at opportunities that will lead to profitable exits. Although VC investment has been relatively under-sized for an emerging market of Brazil’s maturity, SOIs are still behind the curve. SoftBank’s creation of a Latin America-focused US$5 billion innovation fund and the establishment of the SoftBank Latin America Local Hub in 2019 was a signal that VC was set to take off.

Sure enough interest has surged and Brazilian startups attracted record levels of investment in H1 2021 with the pace of deals likely to bring the total to US$10 billion. If achieved, it would mark a giant leap from under US$300 million estimated in 2016 and 40% higher than 2020, which represents the best year on record for VC in Brazil.

At least 15 unicorns have been created in the Latin America region in the year-to-date, but SOIs have only been active in a minority of blockbuster funding rounds. SOI investment in Brazilian VC has been lackluster, but this year has seen the Singaporean sovereign wealth fund throw its weight behind startups in the fintech (Nubank and Warren), agritech (Biotrop) and edtech (Hotmart) sectors. CPP and GIC also participated in the US$425 million Series D round for Sao Paulo-based proptech firm Loft.

Global SWF expects Brazil’s VC ecosystem to align more closely with other emerging markets with SOIs ramping up their activity. Emerging technologies are transforming industries, leading to a new cycle of economic growth.  Digital transformation of traditional industries in a large market will attract SOI capital.

At present, just four SOIs have offices in São Paulo - CDPQ, CPP, GIC and Temasek - with combined personnel numbering 72, according to Global SWF's extensive personnel database. We expect personnel to be expanded, particularly for the VC and tech-oriented Singaporean funds, and more funds are likely to establish operations in Brazil’s financial capital with an expectation that Mubadala could be the next to establish an office. Those that decide not to establish their own offices will be looking to back funds

Brazil’s rapidly evolving e-commerce market is set to be the most prominent in Latin America as broadband and mobile internet penetration levels continue to rise, and fintech is likely to flourish alongside it. Although it is playing catch-up, Amazon has been rapidly ramping up its operations, helping support the growth of logistics real estate.

Telecommunications will be the backbone of e-commerce growth. CDPQ has already made strides in fiber optic networks with a BRL1.8 billion (US$317 million) investment in a joint venture with Spain’s Telefonica, FiBrasil Infraestrutura e Fibra Ótica, announced in March, which aims to reach 5.5 million households within four years. From this growth in telecoms, we expect to see growth in investment in data centers and cloud computing, potentially at a similar pace and size as Southeast Asia where SOIs have been central players.

The influx of external venture capital, encouraged by government support and growing maturity of the corporate ecosystem, raises the prospects of continued high growth in Brazilian venture capital market in the years to come. SOIs cannot afford to ignore Brazil's potential. 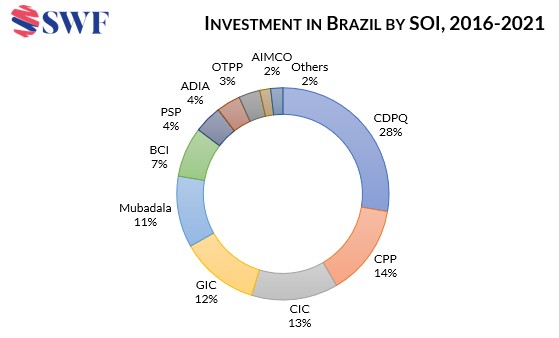