BlackRock is set to rival the size of the entire sovereign wealth industry with assets under management topping US$10 trillion, supported by a bull market run.

According to Pensions & Investments, BlackRock’s AUM is approaching US$10 trillion, based on reported AUM of US$9.5 trillion at end-September. This would put it behind the size of the economies of the US, China and the EU, but nearly four times the size of Africa’s economy.

In terms of the sovereign investor universe, BlackRock is a shade below SWF consolidated AUM of US$10.5 trillion, according to Global SWF data.

Many SWFs have invested with BlackRock, due to its scale and its leadership various products, such as alternatives and ETFs.

Global SWF data finds that Blackrock’s AUM has less exposure to alternatives than the SWF industry as a whole. BlackRock’s asset management is 34% in fixed income and 50% in public equities, compared to 29% and 46% respectively across the SWF industry. In real assets, SWFs as a whole allocate twice as much as BlackRock, yet their hedge fund allocation is half the US investment group’s holdings. 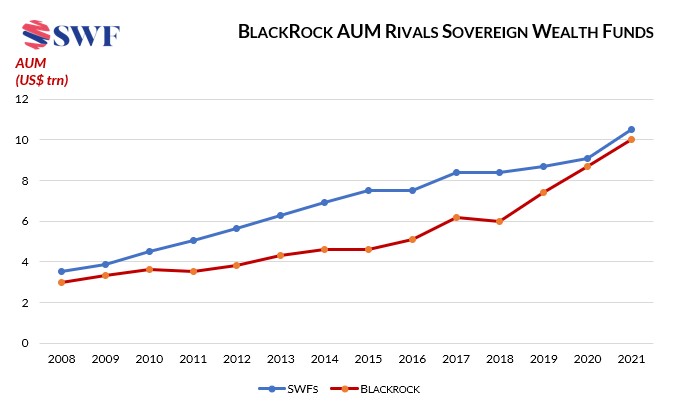 Yet, there is some cross-over between the assets managed by BlackRock and those owned by SWFs; BlackRock’s institutional assets have about doubled over the past decade to US$4.7 trillion. Global SWF’s database includes an array mandates state-owned investors have awarded to the US-based global investor, as well as investments in funds across various asset classes, including bonds, real estate, infrastructure and renewables assets. Indeed, the breadth of investment capabilities of the investor behemoth has made BlackRock a favored partner and manager for state-owned investors, particularly sub-national funds in the US and Gulf SWFs.

BlackRock is one of the favored managers for SWFs. A sign of government faith in BlackRock’s management skills came last month when Saudi Arabia indicated that it was putting its new National Infrastructure Fund (NIF) under BlackRock’s management, utilising central bank excess forex reserves to pour tens of billions of debt and equity finance into power, water and healthcare projects over the next decade.

According to Yazeed Almubarak, chief executive officer and director of BlackRock Saudi bia, the NIF will help “institutionalize the infrastructure market in Saudi Arabia in order to attract more foreign capital.” It will provide both lending and equity investment in new projects as well as provide credit guarantees. BlackRock, the world’s biggest asset manager, is already ramping up its presence in Saudi Arabia and has become favored by the government. It is currently advising the nation’s sovereign wealth fund, the Public Investment Fund (PIF), on developing an environmental, social and governance framework. 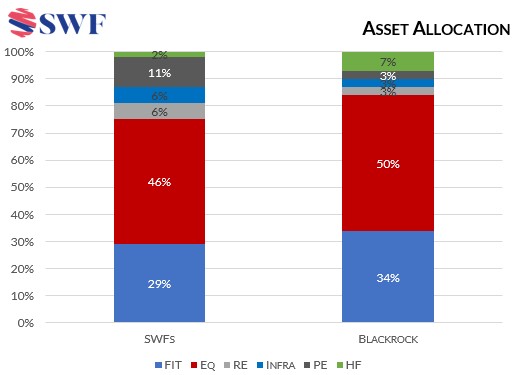