BlackRock continues to forge relationships with the sovereign investor universe with this week witnessing an agreement with Saudi Arabia’s US$620 billion Public Investment Fund (PIF) to pursue joint investment opportunities in the Kingdom’s infrastructure sector.

The agreement focuses on energy, utilities, water, environment, transport, telecommunications, and social infrastructure, but also concentrates the institutional investors Middle East strategy on Saudi Arabia with the creation of an infrastructure team in Riyadh. The alliance will bolster Vision 2030, Crown Prince Muhammed bin Salman’s bold economic diversification program as well as PIF’s ambitious target of US$1 trillion by 2025.

The agreement builds on a growing close relationship between PIF and BlackRock. In October 2021, Saudi Arabia launched a new National Infrastructure Fund (NIF), under the ambit of the National Development Fund (NDF) and operated by BlackRrock, which is usinge central bank excess forex reserves to pour tens of billions of debt and equity finance into power, water and healthcare projects over the next decade.

According to Yazeed Almubarak, chief executive officer and director of BlackRock Saudi Arabia, the NIF will help “institutionalize the infrastructure market in Saudi Arabia in order to attract more foreign capital.” It will provide both lending and equity investment in new projects as well as provide credit guarantees.

The move to create the NIF follows an overhaul of the Saudi Arabian Monetary Authority (SAMA), the country’s central bank, implemented earlier this year to divert hard currency surpluses in favor of PIF and the NDF. It is thought that the two state funds will receive the excess of reserves, after the amount needed to defend the riyal’s peg against the US dollar.

BlackRock is undaunted by its decline in AUM from US$10 trillion at end-2021 to a shade under US$8 trillion at end-Q3 2022. Its decline was caused by the slump in value across asset classes, particularly public equities, and is in stark contrast to continuing growth of sovereign wealth funds. The combined AUM of SWFs rose US$700 billion over the first three quarters of 2022 to US$11.2 trillion, fuelled by massive inflows of oil revenues for Middle Eastern SWFs, including PIF, as well as the creation of new SWFs in emerging markets. 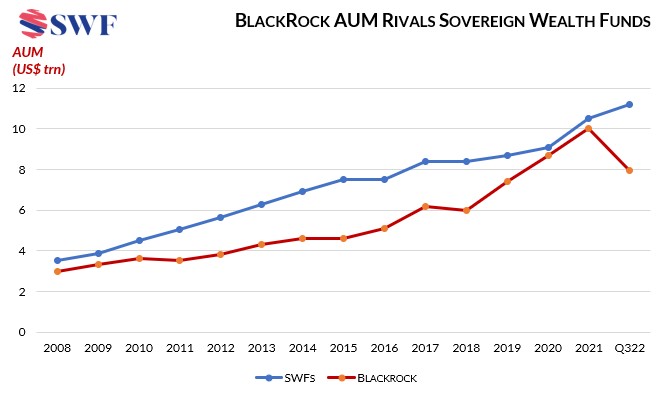 BlackRock’s partnerships also extend to Singapore’s Temasek. In April 2021, the two organizations agreed to team up to invest in private companies that use technology to reduce carbon emissions. The partnership - Decarbonization Partners – aims to launch a series of late-stage venture capital and early growth private equity investment funds and agreed to commit a combined US$600 million in initial capital to invest across the funds, which would also raise money from third-party investors and be managed by staff from both partners. The first fund has a target of US$1 billion.

Temasek has launched a S$5 billion ($3.6 billion) investment platform GenZero focusing on carbon reduction and working with its Decarbonization Partners initiative with BlackRock, marking a major new development of the Singaporean state-owned investor's strategy of backing solutions to climate change.

Mubadala has also forged a relationship with Blackrock. In April, the Abu Dhabi fund joined with BlackRock to invest US$526 million in the Tata Power Company for a 10.53% stake. The capital raise is expected to fund Tata Power Renewable Energy's aggressive growth plans in the rooftop and electric vehicle charging space in India, with a renewables portfolio targeted at more than 20GW, from the current 4.9GW.