Beyond Greenwashing: Ahead of COP26, It's Time for SWFs to Commit to Targets

Paris-alignment is a hot topic ahead of the 2021 United Nations Climate Change Conference (COP26), which starts in little over two weeks, but sovereign wealth funds have failed to commit to the firm targets and assessments of the UN’s Net Zero Asset Owners Alliance (NZAOA) and the risk of "greenwashing" persists.

Speaking at an OECD high-level plenary entitled “Just report on emissions, or commit to Net Zero – what future for sovereign funds?”, CEO of Global SWF Diego López highlighted the need for firm targets in the SWF industry, which manages more than US$10 trillion of assets worldwide. He said, “SWFs join membership organizations, in exchange of a (sometimes substantial) fee. However, some of these guidelines or principles are not enforceable and can result in diversion or greenwashing, for the lack of a better word."

“The major difference with Net Zero Alliance is that it forces members to commit to very specific goals year after year, and if these are not met, the funds must go. Perhaps this is the reason we have not seen many SWFs committing yet, but I do hope this starts to change very soon.”

Global SWF research finds that of the 153 SWFs in the world, 21% have an ESG risk framework. Eighteen SWFs are members of the One Planet SWF group, in which funds endorse the OPSWF Framework and its three principles and pledge to integrate climate change risks and invest in the transition to a Paris-aligned low emissions economy.

The lack of standardization of greenhouse gas auditing and reviews of progress towards targets makes judging OPSWF's real world impact difficult to measure. Some OPSWF members have retained significant carbon emitting assets, such as Mubadala’s weighty holdings in the oil and gas industry and midstream and downstream sectors. While Mubadala has invested US$20 billion via its Masdar renewables subsidiary and other low carbon sectors, the impact on the carbon intensity across the whole portfolio is hard to judge.

Just 12 SWFs have signed the UN Principles for Responsible Investment (PRI), which include incorporation of ESG into decision-making and policies, disclosure of ESG issues of portfolio investments, and report on progress towards implementation. There is no enforcement to disclose reporting or assessment process for PRI signatories, many of whom have not yet fully integrated ESG into their decision-making process.

Just one fund, the German quasi-SWF KENFO, set up to help finance nuclear waste disposal, is a member of the NZAOA. NZAOA commitments include five-year targets for carbon reduction with net zero envisaged across the portfolio by 2050, although some members have been more ambitious and targeted earlier dates. The group is notably more popular among public pension funds (PPFs) than SWFs.

SWFs’ failure to fully grasp the opportunities provided by energy transition and reduced exposure to carbon-intensive sectors has had a negative impact on their returns. Global SWF CEO Diego López said, “We have done some work on the liquid markets space and have found that several SWFs still hold significant O&G stocks and that if their transition had been faster, they would have made a lot more money in these past four years. So, returns can no longer be an excuse, and SWFs can do better.” 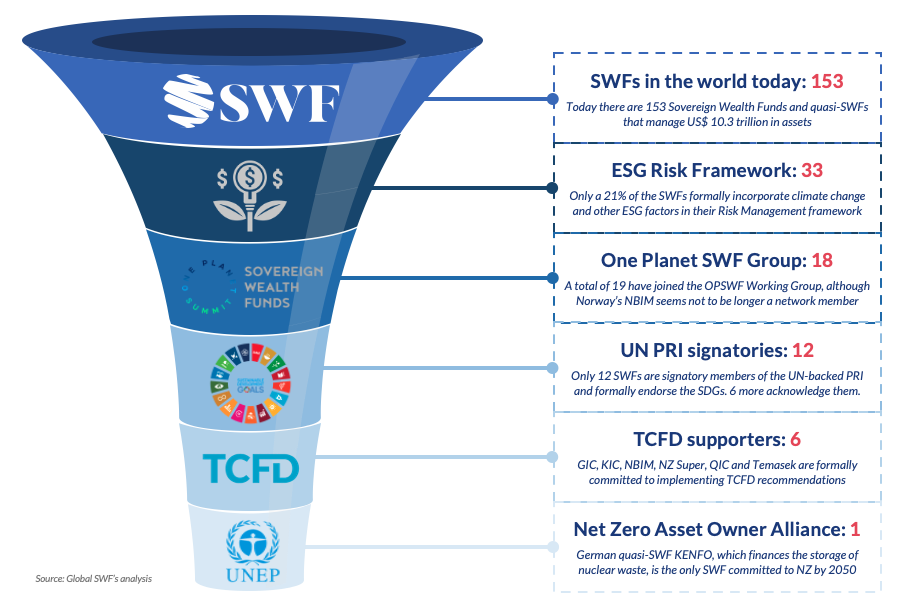 But are targets in themselves useful in judging SWFs’ real-world contribution to fighting climate change? For some funds with significant fossil fuel assets, the emphasis is on supporting the transition over exclusion. A path of improvement that supports an overall reduction in carbon emissions may not meet the quantitative targets that can be met through selling off “black” assets in exchange for “green”. Mubadala and Temasek are among those seeking to reduce the carbon in their portfolios while maintaining their ownership of carbon emitters. Rather than offloading assets and making them someone else’s problem, the SOIs are looking instead at transforming the businesses.

In its latest sustainability report, Mubadala's oil and gas subsidiary Mubadala Petroleum announced this week that it had reduced greenhouse gas emissions by 25% over the past three years with a 4% reduction in 2020 alone. As part of its commitment to energy transition to lower carbon emissions, it has adopted a 62% gas weighted portfolio – natural gas being lower carbon intensity than oil.

Temasek has also looked to transformation of assets like Singapore Airlines and oil rig supplier Sembcorp Marine rather than exclusion in its goal of halving net carbon emissions of its portfolio by 2030. The Singaporean state-owned investor has not set hard carbon targets for its portfolio companies, preferring instead to support them in their decarbonization.

The transportation assets have done nothing to help the state investor’s carbon ambitions. Temasek’s 2021 annual report notes that its carbon emissions have risen by more than a third to 30 million tonnes over the past decade – a figure it aims to bring down to 11 million in net terms by 2030 and net zero by 2050. It has adopted a “a three-pronged approach”: investing in climate-aligned opportunities; enabling carbon negative solutions; and encouraging decarbonization efforts in businesses. This strategy is accompanied by the bold step of carbon pricing, to internalize the economic and social costs of carbon emissions and guide investment decisions, with an initial internal carbon price of US$42 per tonne of CO2 – a price that is set to increase over the coming decade.

In the bid for net zero, carbon negative technologies are also being explored. As a voracious venture capital investor, Temasek is funneling liquidity to firms with innovative solutions to climate change and food security.

It is widely acknowledged that there is more work to do on standardization in the measurement of climate impacts by SWFs, but the push continues in the right direction. More funds are set to provide more meaningful reporting of their greenhouse gas emissions of their portfolio – and they may find that greater transparency and accountability could ultimately reap rewards.