Investment in India’s infrastructure has an enduring attraction for sovereign wealth funds with around US$18 billion allocated to the development of the South Asian economy by state-owned investors from 2016 to date - and Saudi Arabia is set to boost that level even further with new plans that are set to involve green energy expansion.

Notable by its absence is Saudi Arabia’s Public Investment Fund (PIF), whose main contribution has been its involvement in the Reliance Jio InvIT, a trust that holds Indian billionaire Mukesh Ambani’s fiber-optic assets which also won the backing of ADIA.

This week, the US$600 billion Saudi fund tasked Bain and Company to develop an India strategy to identify opportunities in infrastructure, according to The Mint. One of PIF’s main interests is the renewable energy sector, which is the focus of its domestic infrastructure development and chimes well with India’s own rapid solar and wind generation expansion.

The choice of Bain suggests renewables will be a major part of PIF’s India strategy. This month it announced an industry-leading move to achieve net-negative carbon status this year, meaning the firm will support nature-based projects to remove more than 100% of its 2021 scope 1, 2 and 3 carbon emissions. The firm plans to achieve net-negative status every year going forward. 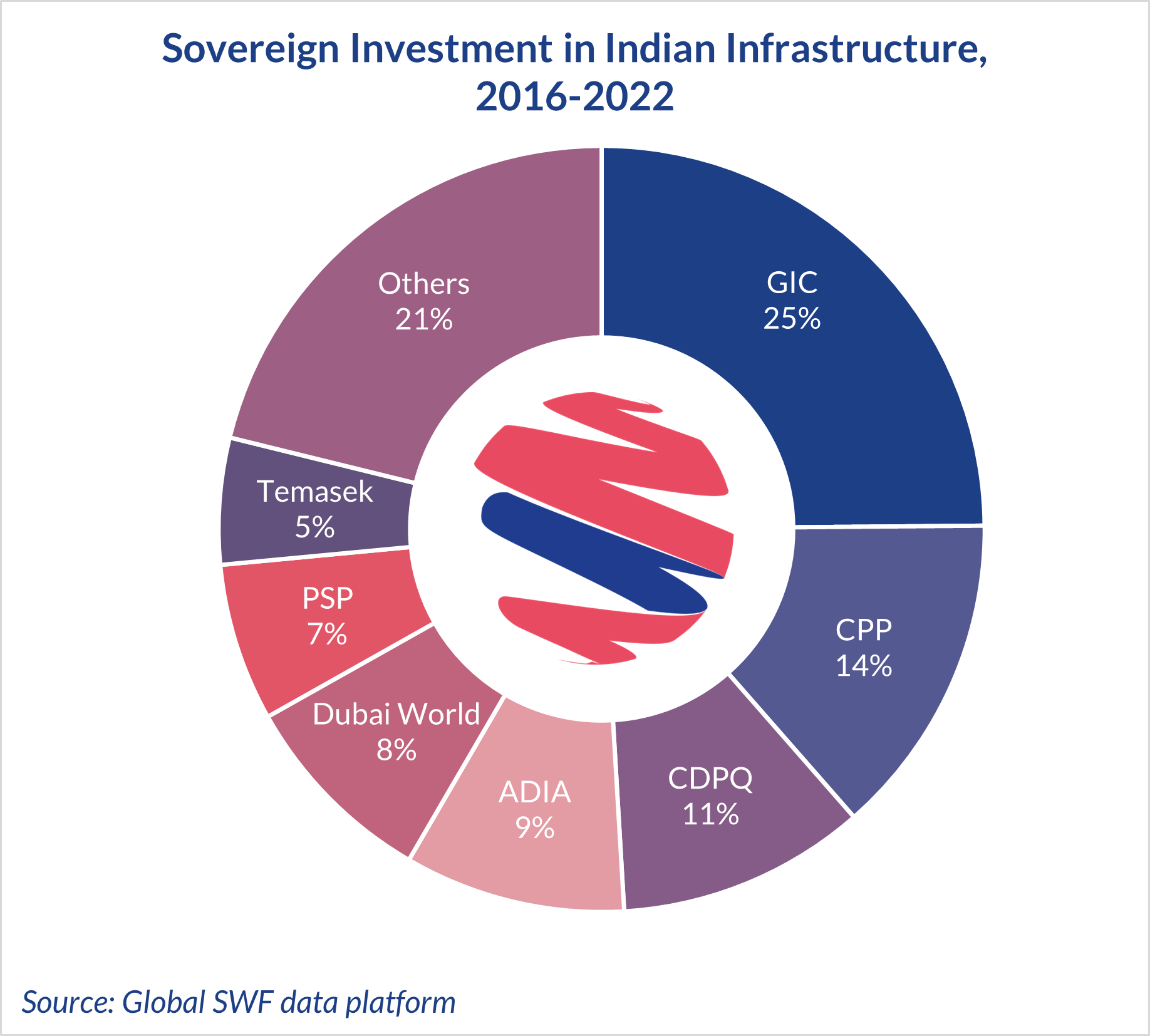 India has said it will meet net zero emissions by 2070. With a population of 1.38 billion and growing, India is the world’s fourth biggest emitter after China, the US and the European Union. Yet, it has some of the lowest per capita carbon dioxide emissions, at 1.9 tonnes per person in 2019 compared with 5.5 tonnes in the UK and 16 tonnes in the US. Prime Minister Narendra Modi has nevertheless declared that 50% of the country’s electricity supply will be comprised of renewables by 2030, which would entail an increase in the sector’s generation capacity from 134GW today to 500GW by the end of the decade. The National Infrastructure Pipeline (NIP) aims to support growth of India’s infrastructure sector with total investment of US$ 1.4 trillion and is bolstered by liberalization of FDI regulations and highway privatization.

State-owned investors (SOIs) are playing a major role in assisting India in meeting its ambitious targets, with Greenko, Azure Power and ReNew Power the main vehicles for investment. In February, India’s National Investment and Infrastructure Fund’s (NIIF) Ayana Renewable Power announced it had partnered with Greenko – backed by Singapore’s GIC and Abu Dhabu’s ADIA – to store 6GWh of power in hydro pump storage plants that Greenko is building at Pinnapuram in Andhra Pradesh. Th deal positions the quasi-sovereign fund the NIIF at the heart of India’s green energy transformation.

The government also seeks to help channel FDI in infrastructure via its quasi-SWF  NIIF, which was formed in 2015. NIIF  closed its Master Fund in late 2020 with US$ 2.34 billion from ADIA, AustralianSuper, CPP, OTPP, PSP and Temasek, as well as USA’s IDFC, the government of India and four other Indian leading institutions. NIIF also registered a Fund of Funds, which has already closed commitments from AIIB and ADB, and a Strategic Fund, for a total AuM of US$4.3 billion. Additionally, in November 2020, the government announced it would infuse US$ 810 million equity in NIIF’s debt platform, in its attempt to drive infrastructure creation.